Hakone Sekishisho (Checkpoint) was one of the biggest and most important of the 53 major checkpoints located along the old Tokaido route between Edo and the capital, Kyoto. Travelers along the Tokaido were expected to undergo strict checks at these checkpoints. 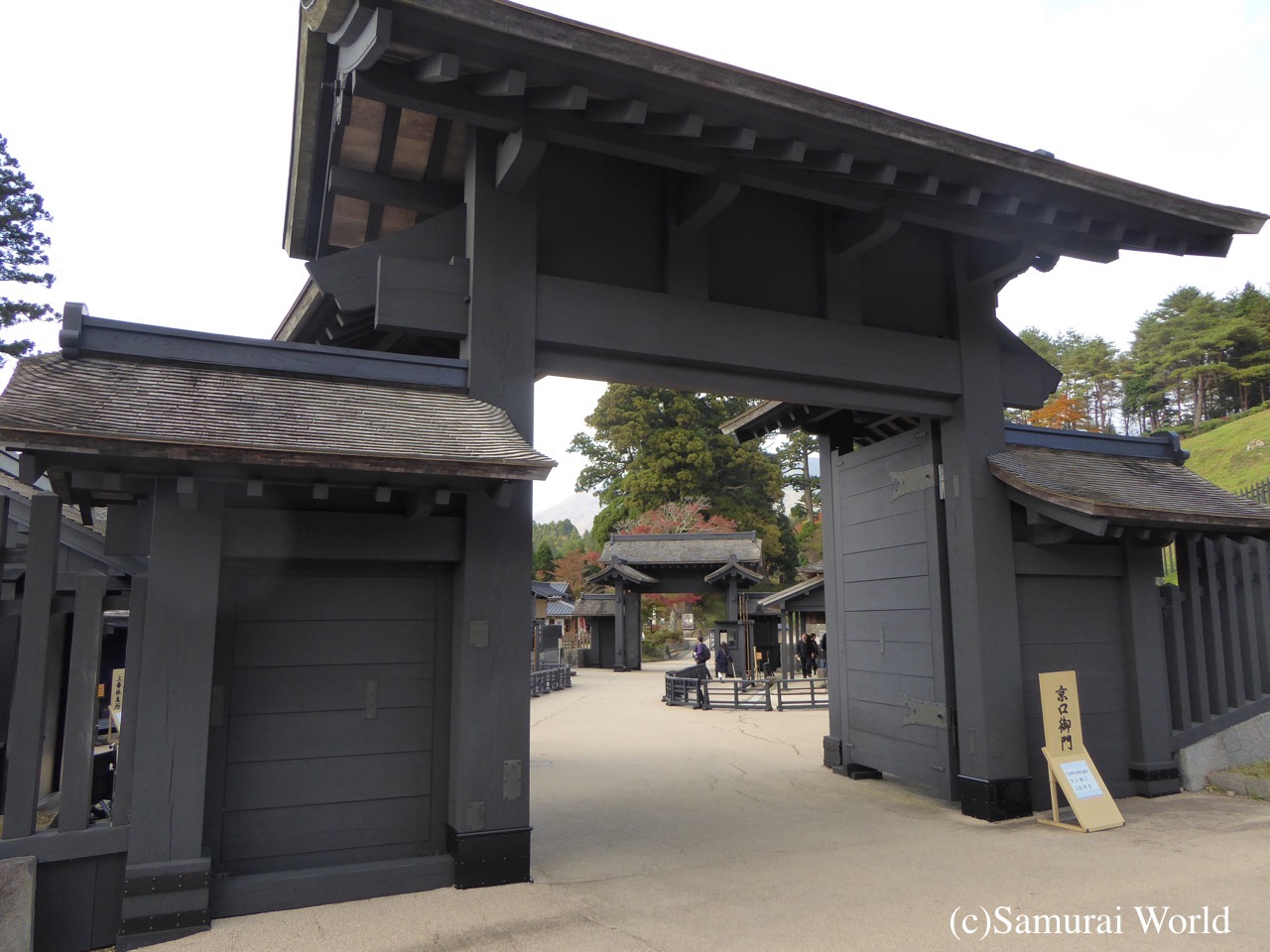 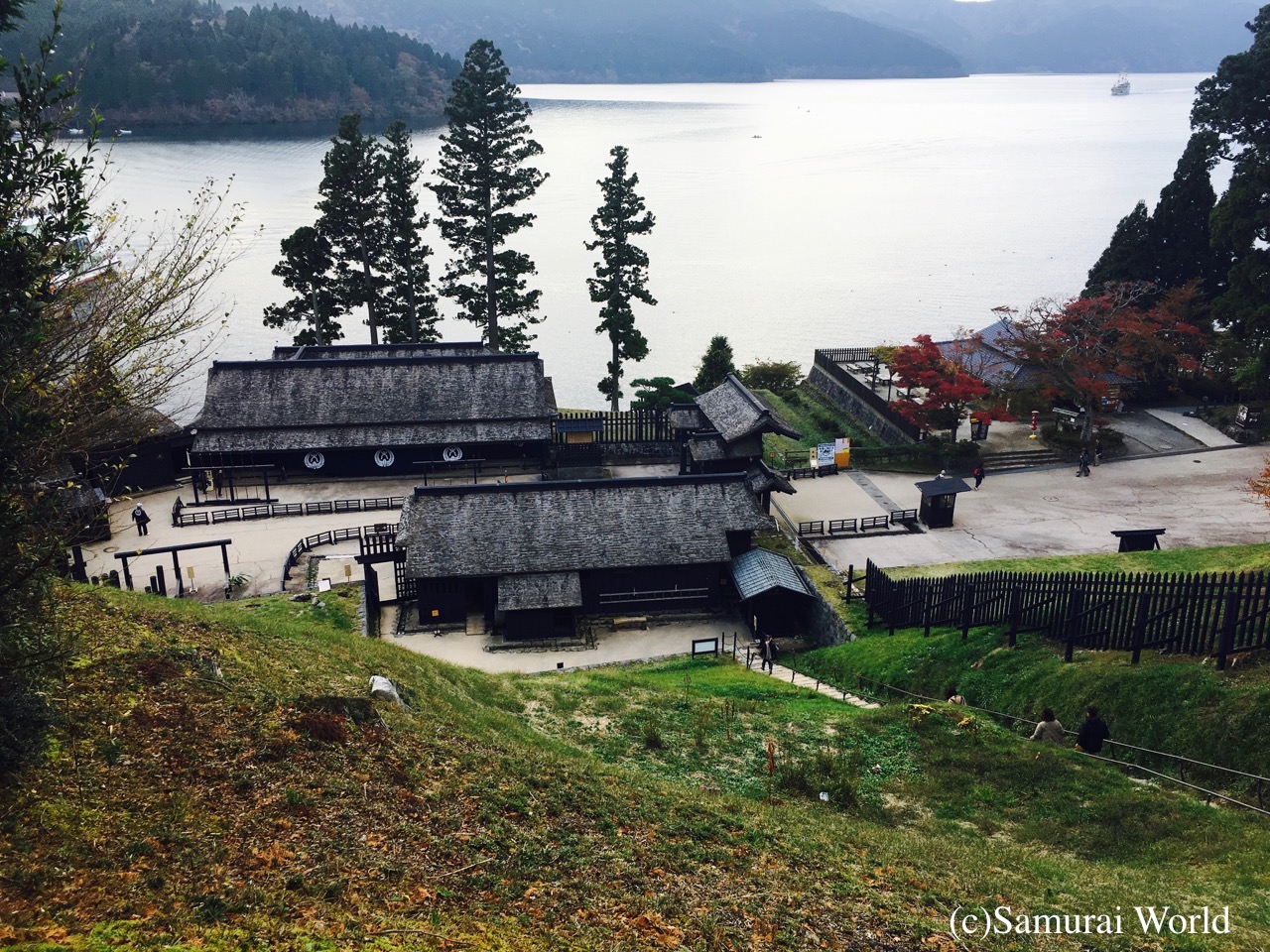 Commencing operations in 1619, checkpoints, such as Hakone in particular, watched for the smuggling of weapons, and of women escaping from Edo. Most of the daimyo lords maintained separate residences in Edo, to be used when serving during times of Sankin Kotai (alternate attendance) and their womenfolk were often kept in Edo as “hostages”. Any women trying to leave Edo were suspected of fleeing prior to any potential insurrection, and so close attention was paid to women passing through Hakone.

People coming from either Edo or from the opposite direction, Kyoto, would be herded into corrals called the Edoguchi Sennin-damari, or the Kyoguchi Sennin-damari waiting areas before undergoing inspection. They would then pass through the heavily guarded Edoguchi-mon or Kyoguchi-mon gates, and proceed to the main building. 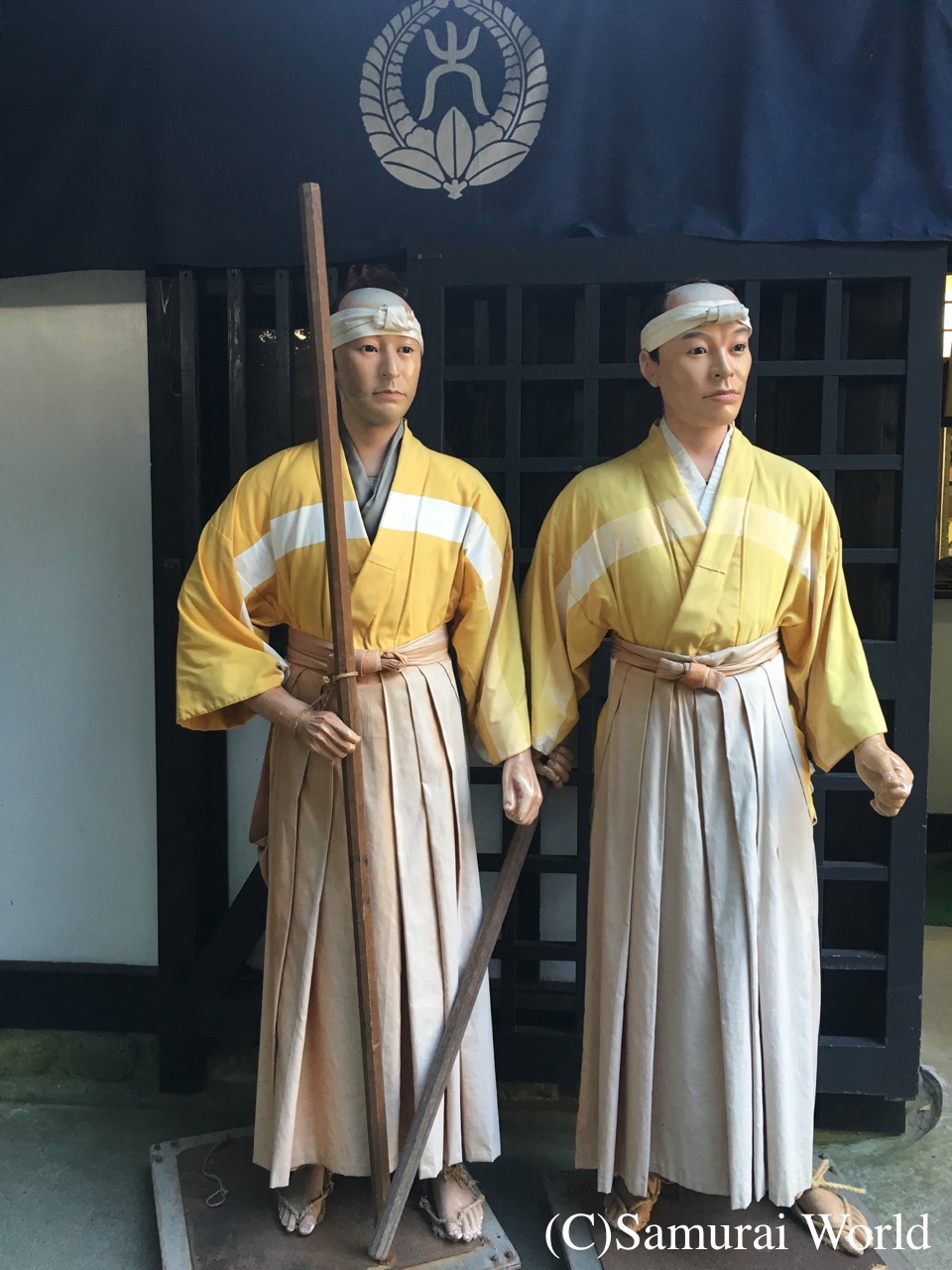 Guards at the gates

The officer in charge of the checkpoint was known as the Bangashira. He was supported by the Yokometsuke. Below them were three Banshi, a Jobannin, and another 15 ashigaru foot soldiers as guards. There were also female officers known as Hitomi-onna, who would closely inspect the women travelers, checking their belongings, clothing, personages, even hair.

The main building was called the Obansho, or office, which also included the off-duty quarters, or Kamibanku-sokusho for the higher ranked officials. Within this building were the Menbansho, the main office area fronting the road, used by the Jobannin. The Hitomi-onna officers would inspect women travelers on the outer verandah area of the Menbansho. 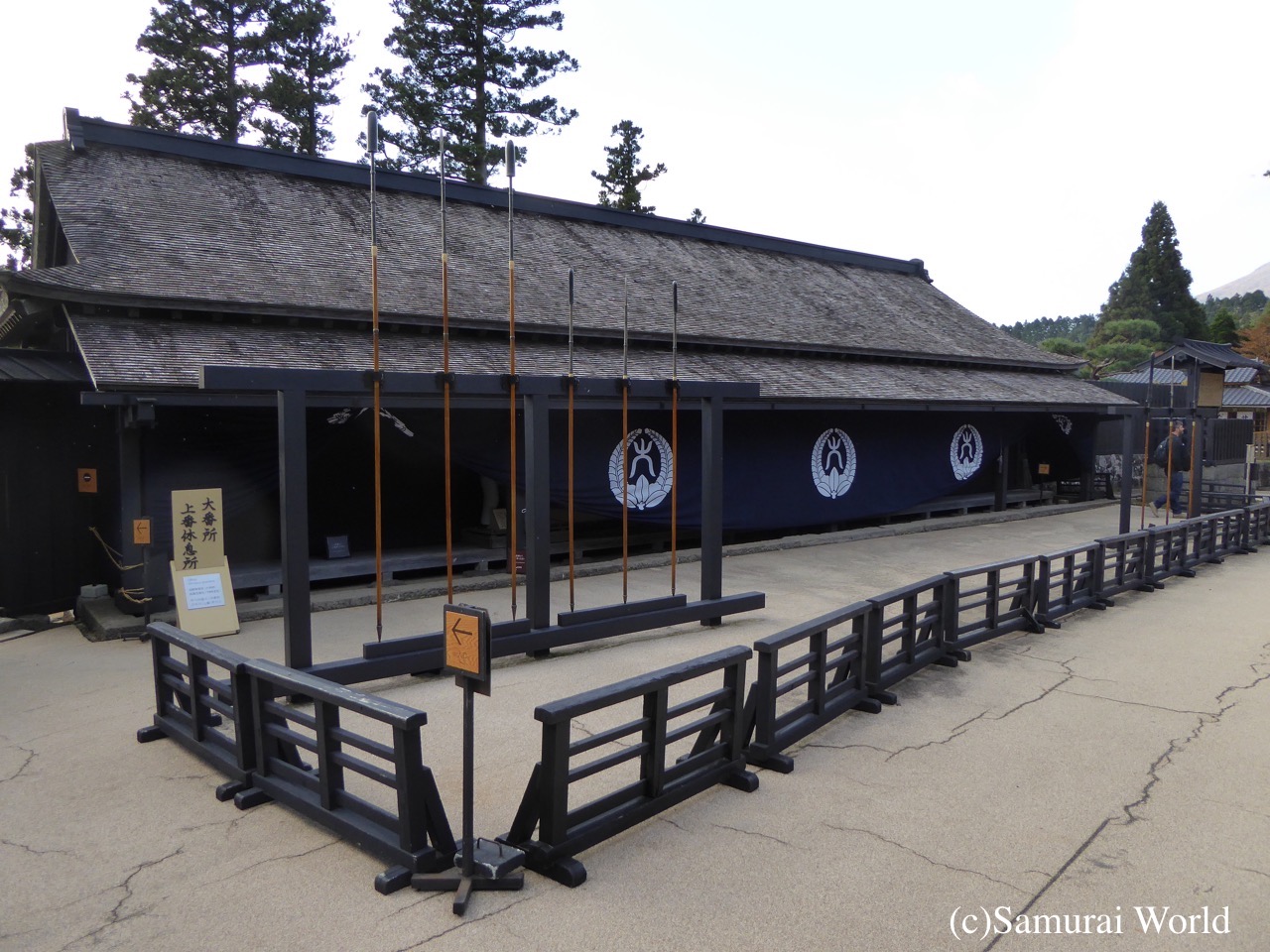 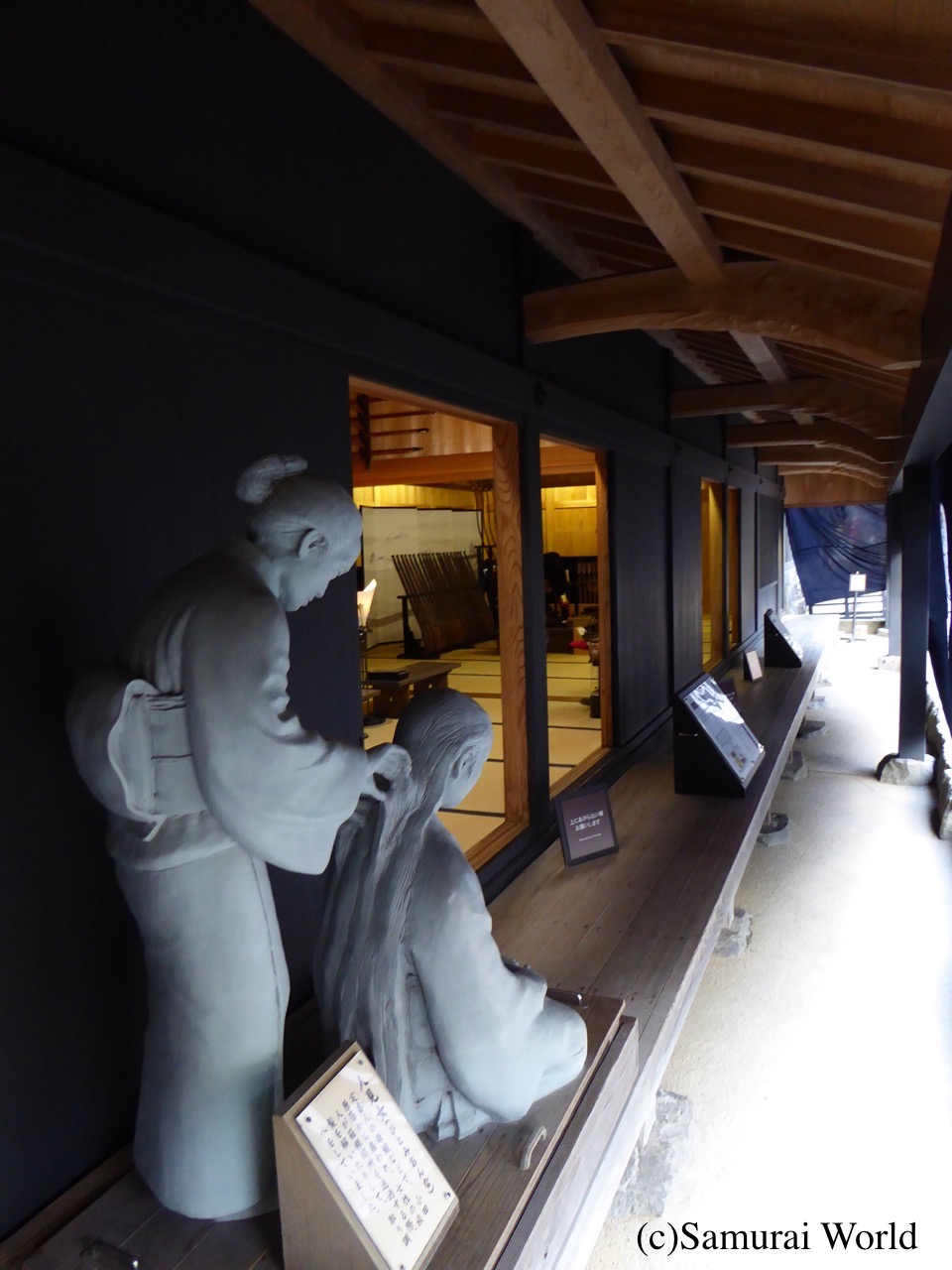 Female guards called Hitomi-onna check even the hair of travelers 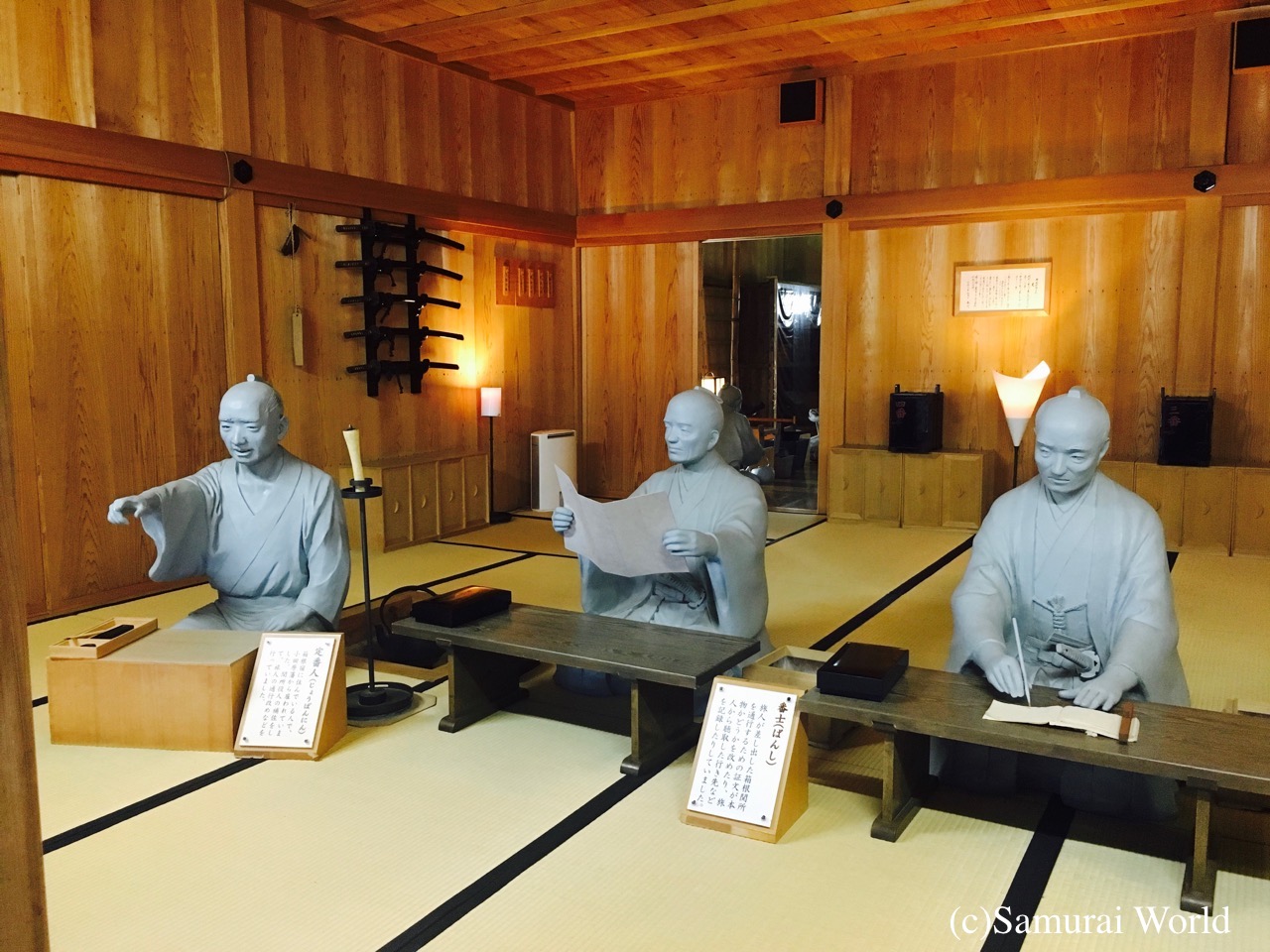 The Kamino-ma was the Bangashira’s office. It was filled with weapons, matchlock guns, bows and arrows in an effort to intimidate travelers. To the back of the building was the living quarters for the top officials, and included private rooms, and a dining / living area called the Katte-itanoma. Behind that was the daidokoro-doma kitchen, and Yudono bathroom. 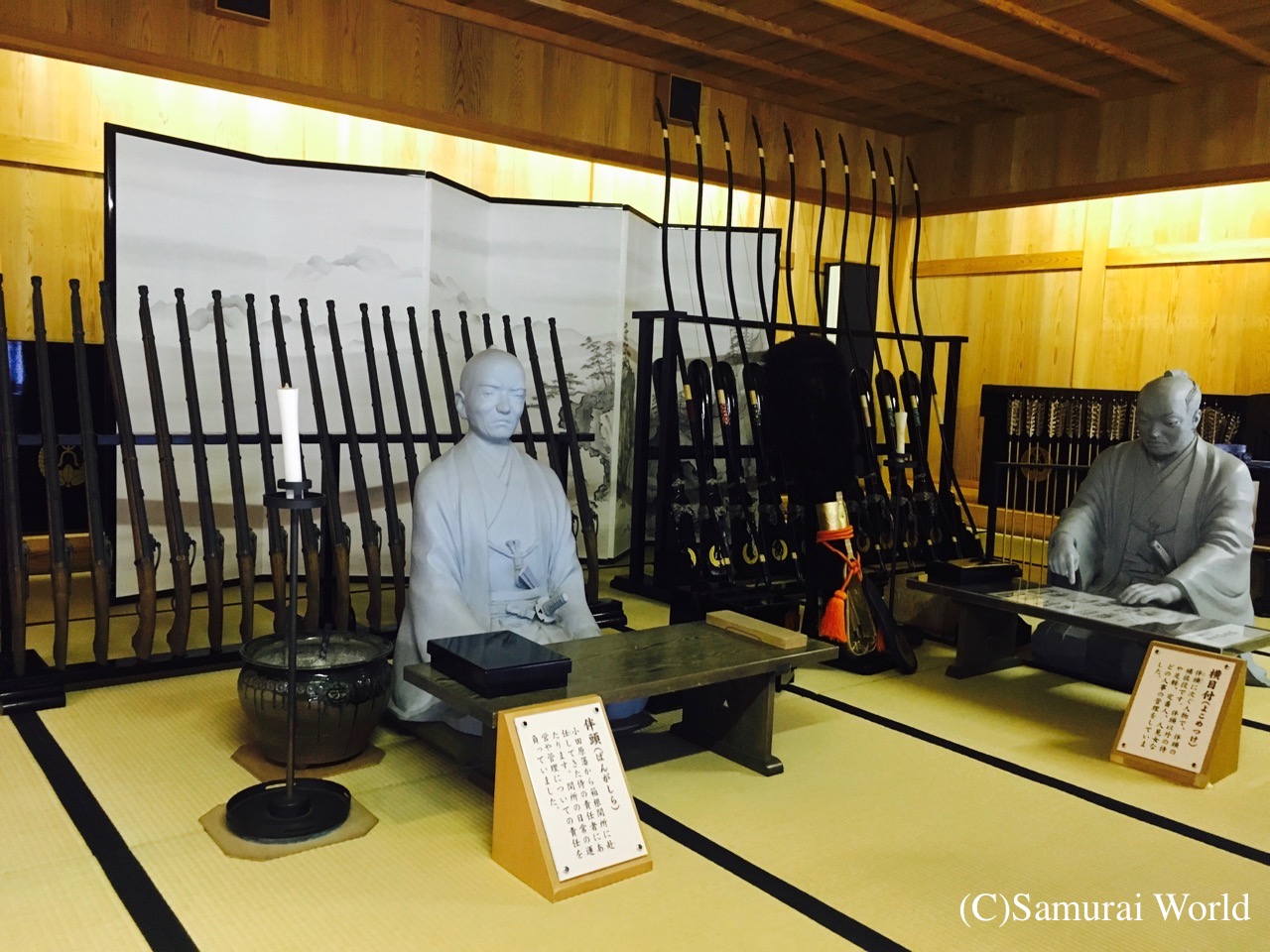 On the Kyoto side of the Obansho was an Umaya, horse stall, with room for five horses, although only two were housed here. The vacant stalls were used as storage space for cleaning and fire prevention items. The Edo side had a small shooting range for archery and musketry practice.

Opposite the Obansho and flanking the Tokaido Ashigaru-bansho, the foot soldiers quarters. They would work from here during the day, and sleep her at night. Temporary prison cells were also found in this structure. Out front, weapons and tools to aid in arrest, such as the u-shaped neck pinning Sasumata, the T-shaped Tsukubo and the spiked pole known as a Sodegarami, both used to catch clothing and pin down escapees were set at the ready, as well as intimidate passers through. 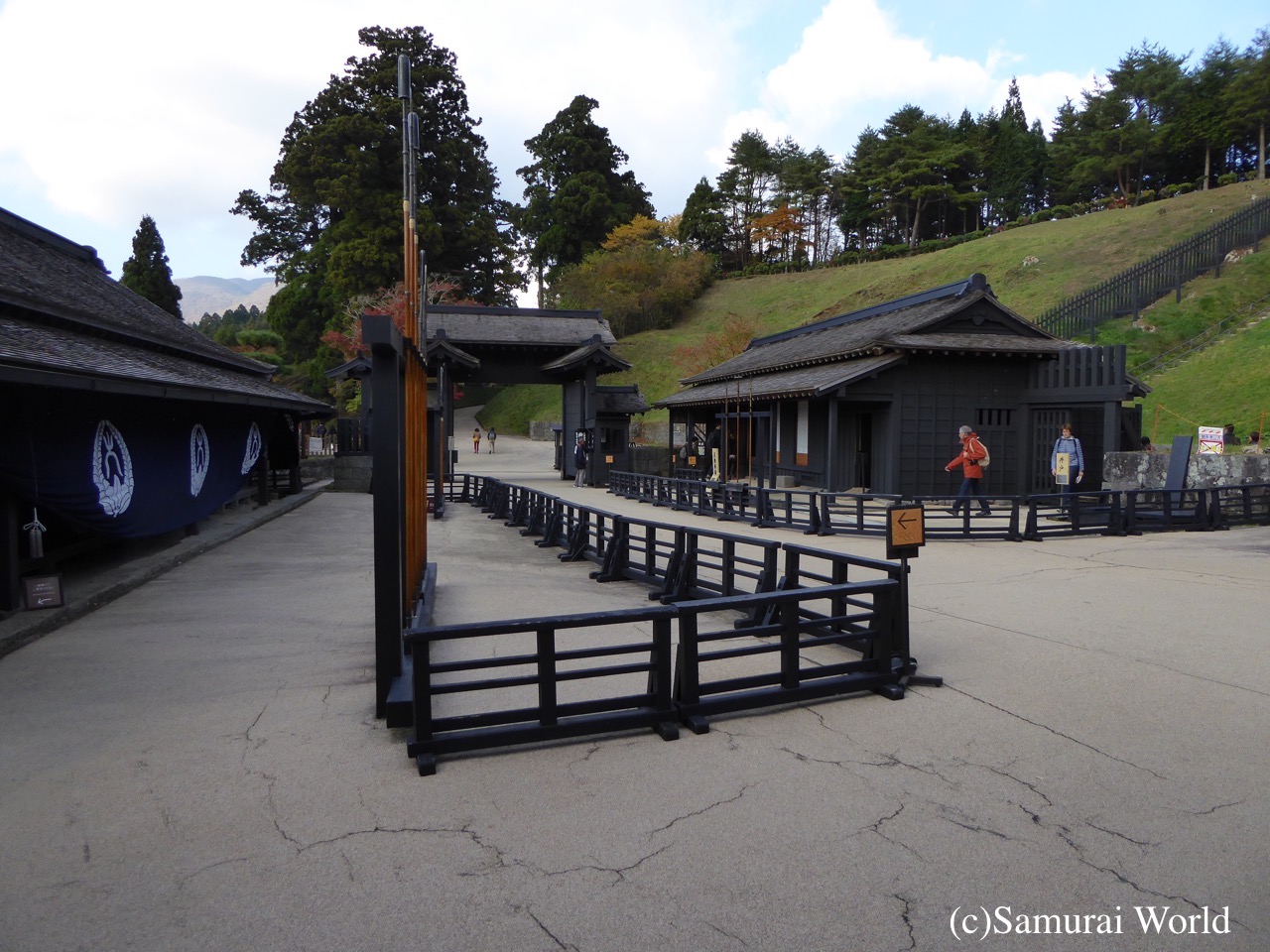 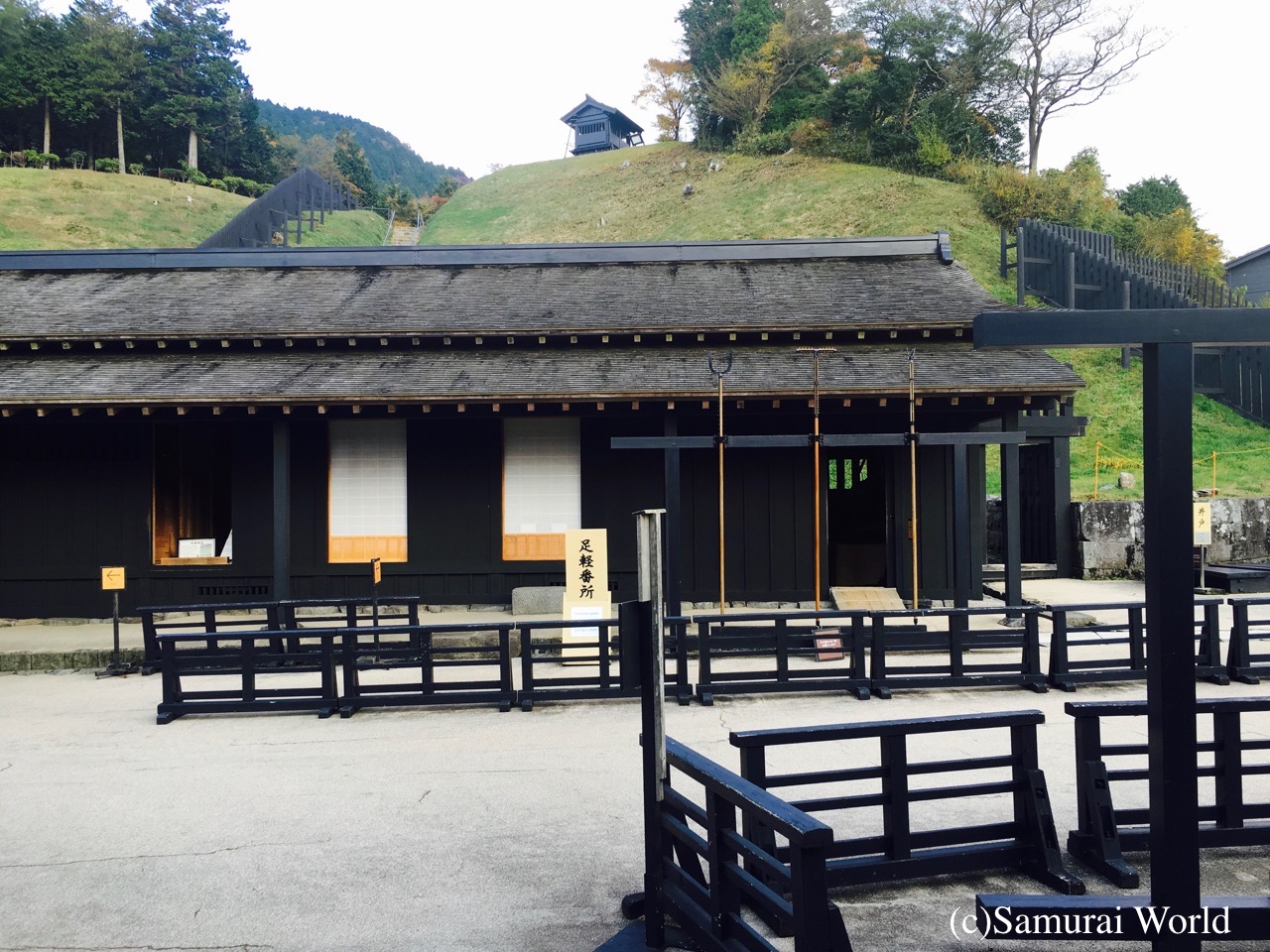 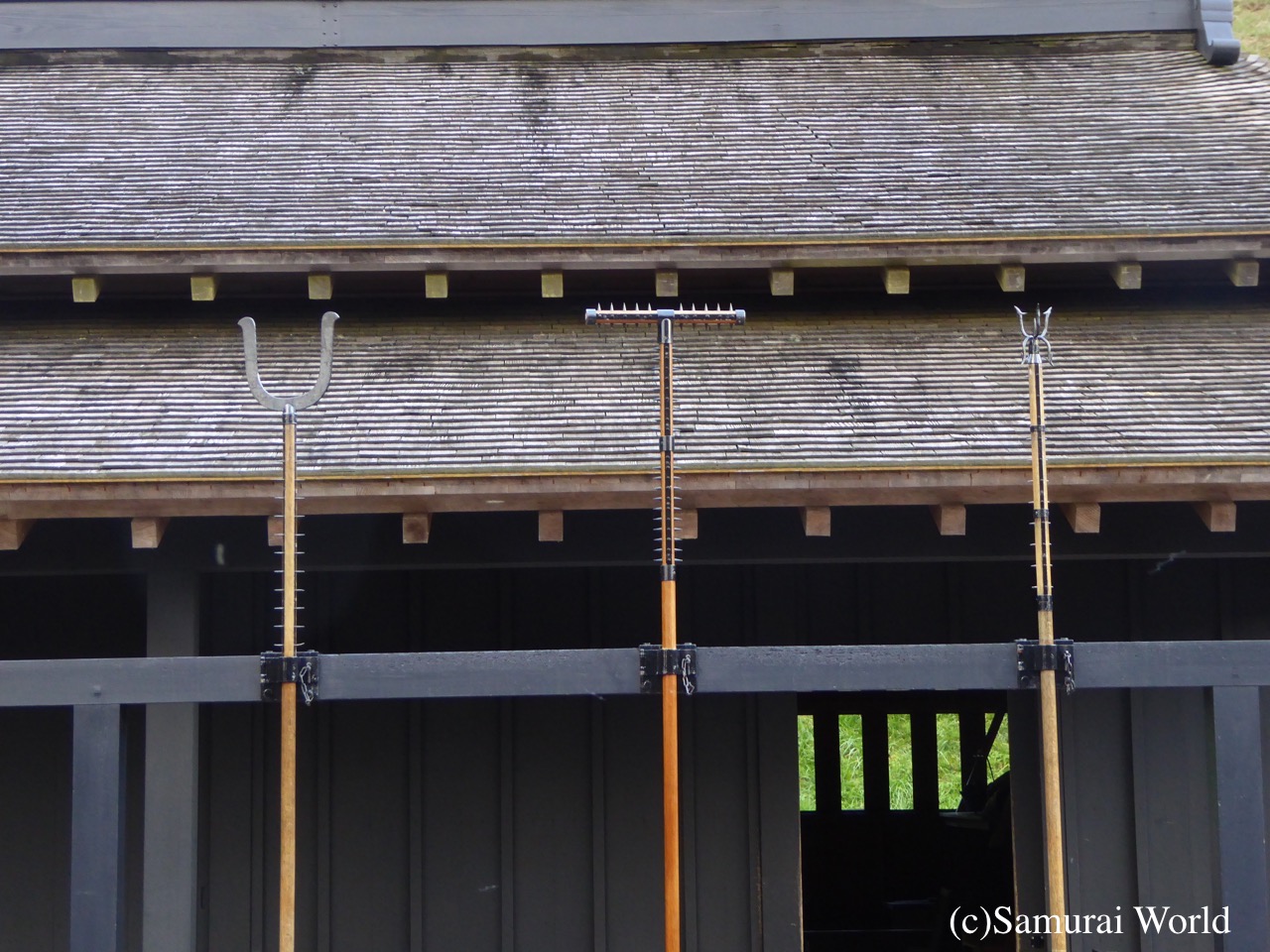 A simple lookout tower stood on the hill above the checkpoint. This two-story Tomibansho watched the comings and goings below, as well as any traffic on lake Ashi. 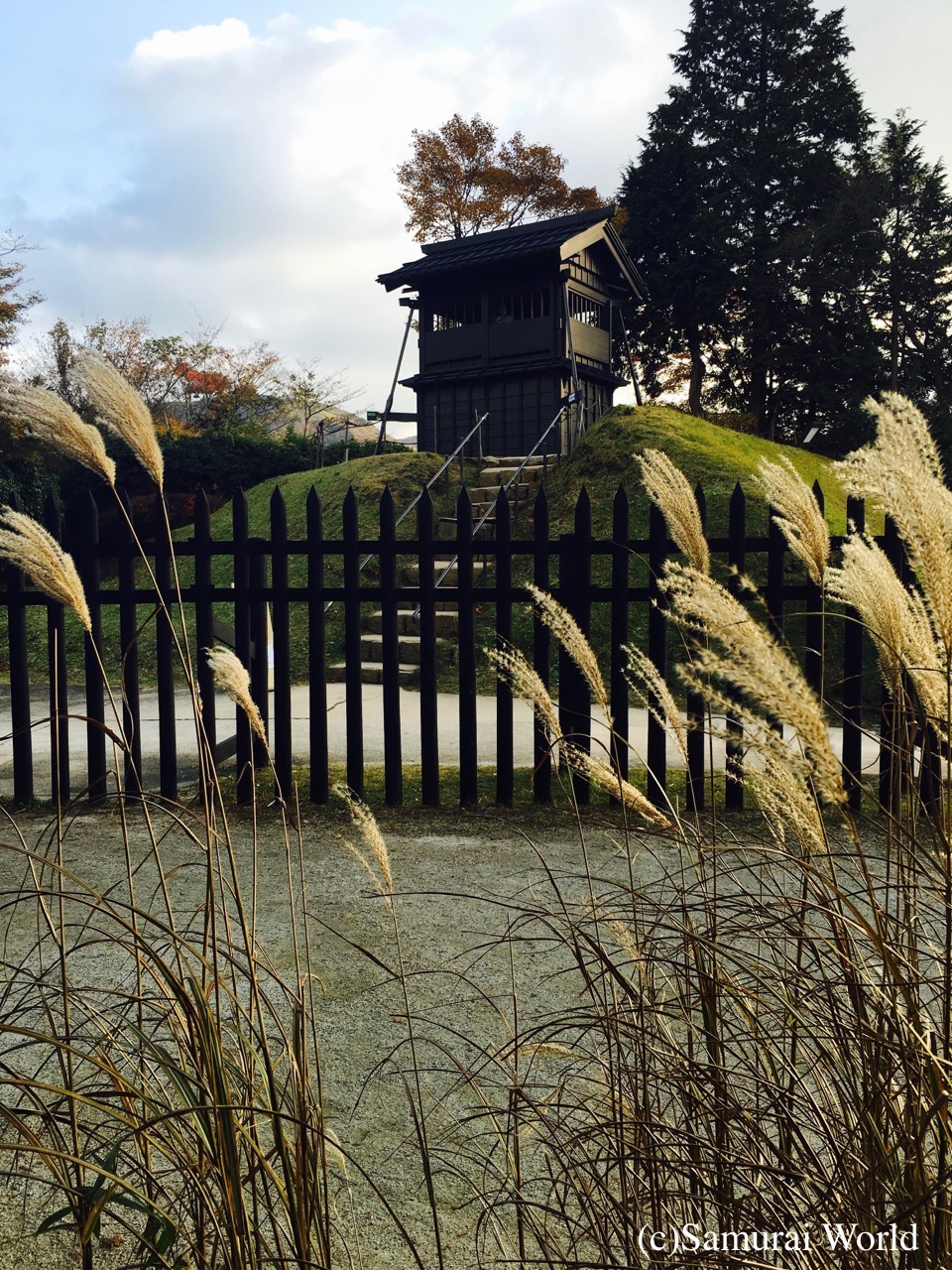 A detailed report on the repairs of the checkpoint dated 1865 was discovered in 1983, and revealed details of the buildings and structures. Excavations and restoration of the Hakone Checkpoint was undertaken from 1999 to 2001, and full traditional architectural restoration was completed by the opening in 2007, 140 years after its initial demolition.