Ishida Mitsunari was born in Ishida Village, Omi (Shiga Prefecture) in 1560. Toyotomi Hideyoshi was conducting military training exercises when he came across the 13 year-old Ishida Mitsunari not far from Hideyoshi‘s Nagahama Castle. Mitsunari served three cups of tea for the thirsty lord. The first was in a big chawan teacup, filled with an unusually generous serving of warm green tea. For a thirsty Hideyoshi, the amount and temperature were just right, and he drank it all at once. The second cup was served in the same chawan, but a bit hotter than the last and only about half as much. Relaxed, Hideyoshi took his time over this cup. Finally a third was brought forth, a smaller serving in a smaller bowl, but much hotter than the previous two cups. Hideyoshi, now totally composed, could enjoy this one. Impressed, he appointed the boy to his staff. Mitsunari would come to serve the Toyotomi loyally, and would be rewarded as such. 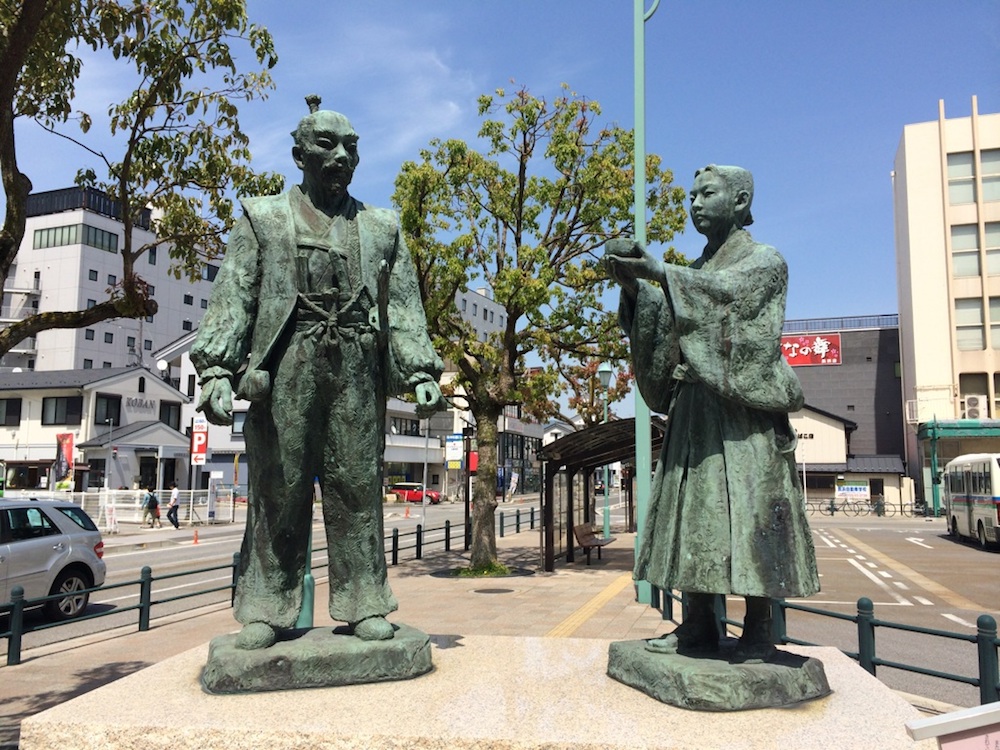 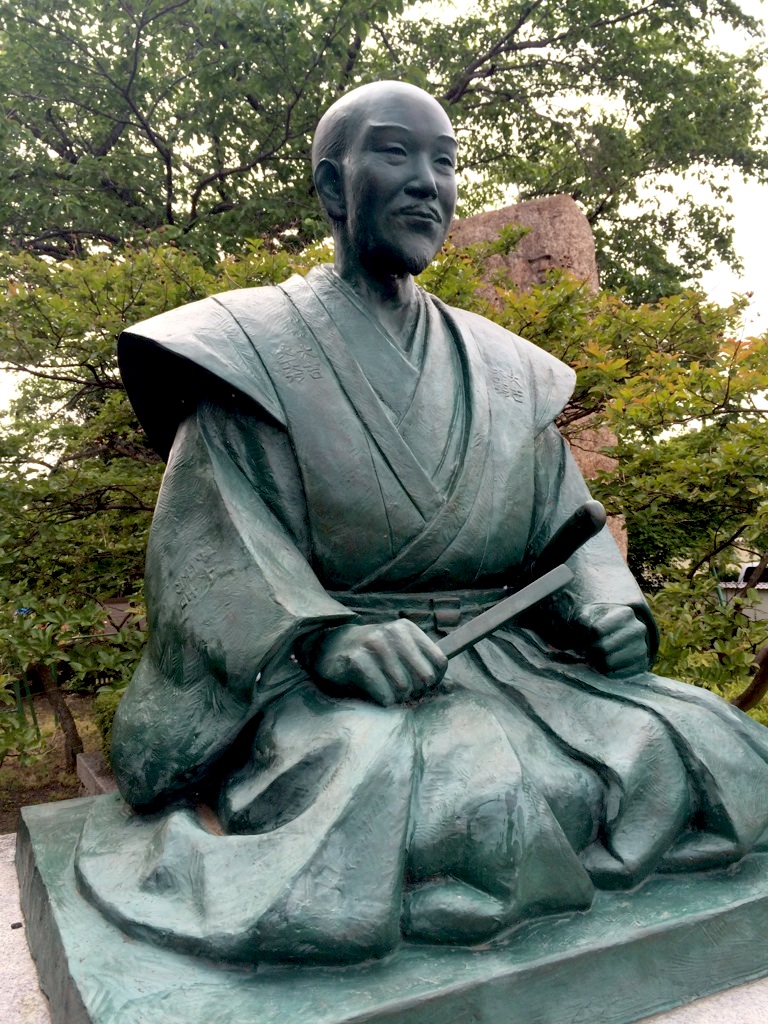 In 1585, at the age of 25, Mitsunari was appointed Jibu-shosuke, one of two principal commissioners below the administrator for genealogies, marriages, funeral rites, imperial tombs, theaters, and music. Mitsunari was also responsible for the reception of foreigners, most notably the Spanish and Portuguese who came in growing numbers, bringing trade and proselytizing. A gifted mathematician, Mitsunari was placed in charge of the famed “sword hunt” conducted by Hideyoshi in an effort to disarm the non-military bulk of the population and preserve peace.

He had been allocated a stipend of 186,000 koku and the castle of Sawayama in Omi. Although an able administrator, his elevated position as one of five Bugyo commissioners was not awarded on his martial merit, nor on his having performed heroic deeds or services, but was instead due to his ability in the tea ceremony. This fact, and his brash, aloof attitude caused personal problems between himself and the other retainers.

After Mitsunari accompanied General Ukita Hideie on the Korean campaign, he would return to find that his position as a senior retainer was powerless upon the creation of the Tairo, the Council of Five Elders, established to rule in the stead of Hideyoshi’s young son and heir, Hideyori. This council was headed by Tokugawa Ieyasu, as appointed by Hideyoshi himself. Not long after Toyotomi Hideyoshi died in 1598, Mitsunari soon realised that his lord, the young Hideyori, was being usurped by the Tokugawa.

Ieyasu went as far as shredding the peace forged by the Toyotomi, leading to the nation being torn into two factions, East and West. The culmination of the unrest was the most decisive Battle of Sekigahara, fought on October 21, 1600. Despite having the greater numbers, the higher ground and better strategic positions, the Ishida Mitsunari led Western forces were defeated. The victor was Tokugawa Ieyasu. Mitsunari was forced to flee towards the end of the seven hour battle. 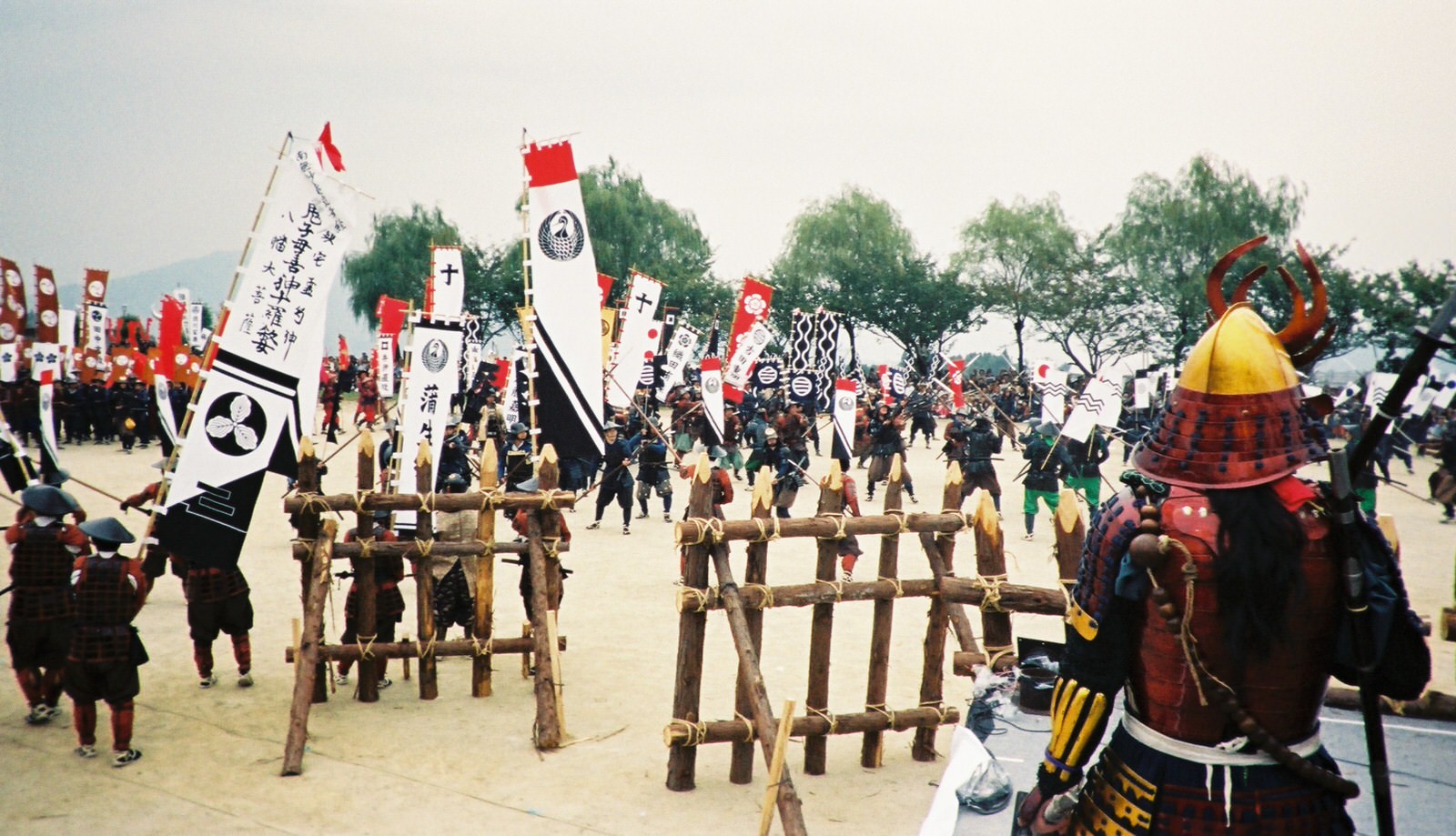 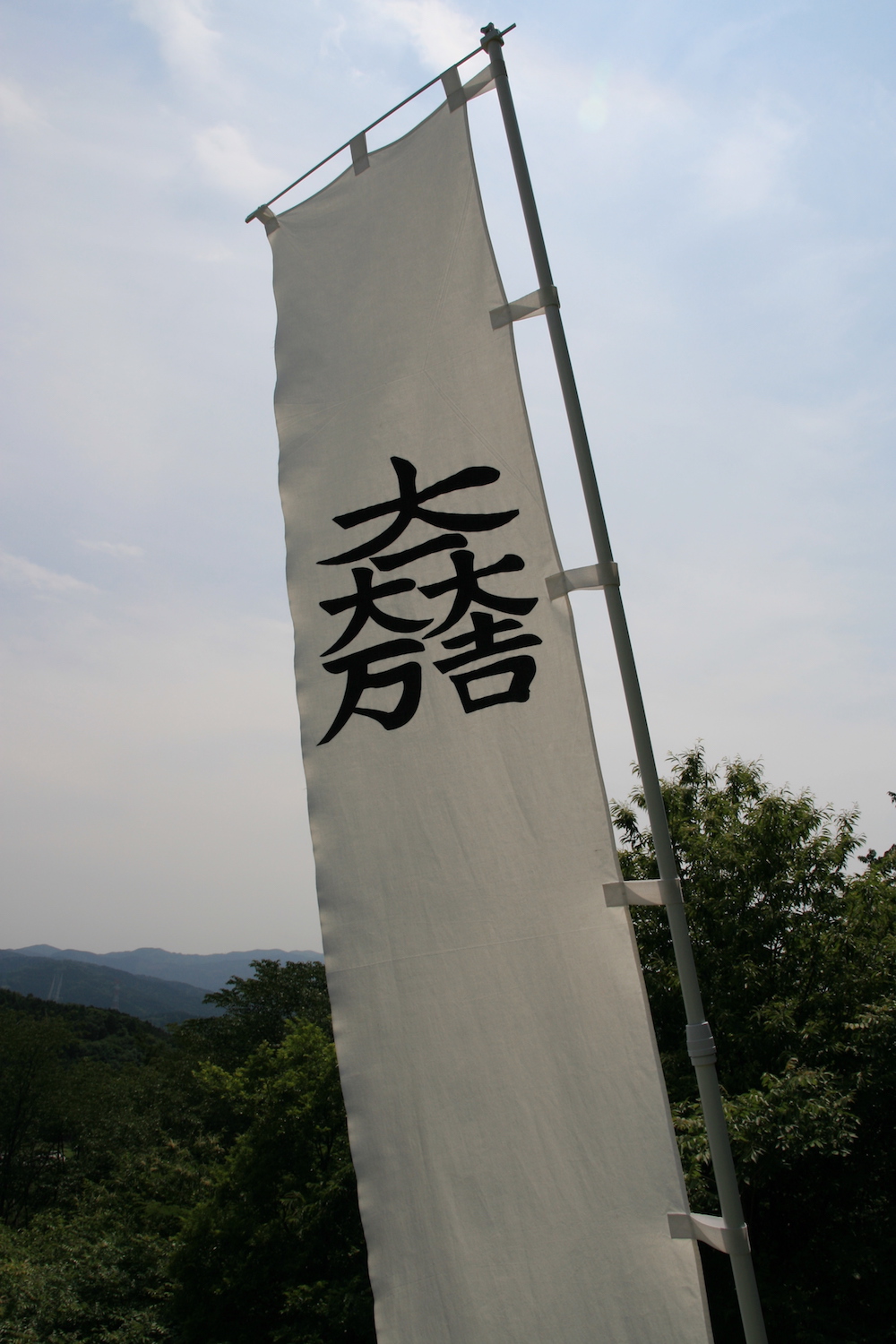 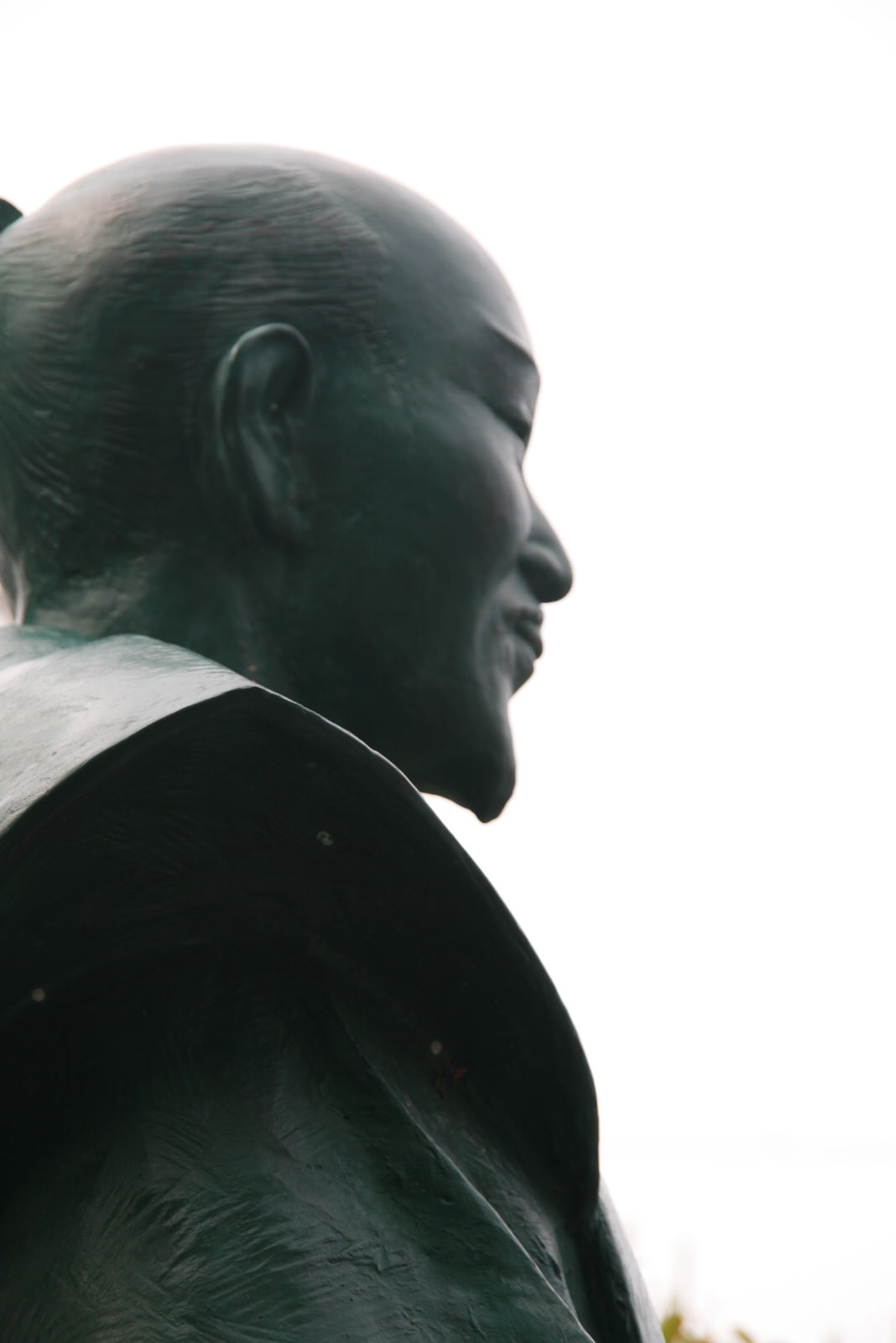 In the days following the battle, Tanaka Yoshimasa, a former friend of Mitsunari had been ordered by Ieyasu to hunt for the Western leader, and after two days of searching, captured Mitsunari in the village of Furuhashi just outside of Inokuchi Mura (Toyama Pref.). Mitsunari had fled directly to the Hokekyo Sanju-in Temple area, as the head priest had been one of his childhood teachers.

“What is it that you need?” asked the kindly priest when confronted by an exhausted and frightened Mitsunari, expecting an answer of food, water, and shelter. Instead, Mitsunari, belligerent as ever answered “Ieyasu‘s head!” The priest then hid the fugitive in a rock cave behind the temple. When Tanaka finally found him, Mitsunari was still dressed in the clothes he’d worn under his armour at the battle. Much to Tanaka’s relief, his erstwhile friend gave in quietly, handing the wakizashi that had been presented to him by Hideyoshi to Tanaka in a mark of defeat. Mitsunari was tired, wet, cold, and afraid. He had not eaten properly for days and was suffering from dysentery. The usually proud and arrogant lord was captured and turned over to the Eastern allies in a sad and sorry state.

Brought before Ieyasu, in the ruins of Otsu Castle, Ishida Mitsunari was chided for having been the cause of so much bloodshed. Mitsunari retorted angrily that it was Ieyasu who had caused the war by turning against the Toyotomi. He went on to say that he had resisted the temptation to take his own life as he wanted to have his death be an extra burden on Ieyasu.

The captured trio of Ishida Mitsunari, Ankokuji Ekei, and Konishi Yukinaga were publicly exhibited around Osaka with metal rings around their necks and carried through the city streets in a large open crate. Mitsunari was made to shout out his alleged crimes in a loud voice and describe the troubles he had caused as a further embarrassment. The three of them were further exposed to public ridicule in Kyoto. On November 6, they were executed at Rokujo-ga-hara, the dry riverbed of the Kamo River in Kyoto. Their heads were then put on display beside the city’s Sanjo Bridge.

Mitsunari never gave up hope. A well-known story is that on his way to the execution grounds, Mitsunari was offered a persimmon, but refused it on the grounds that it would be bad for his indigestion. Konishi, his partner in death, is said to have remarked that as they were about to be executed, it was hardly necessary to consider his digestion. Mitsunari replied that, “As one can never tell how things are going to turn out, one must at all times take care of one’s health.”

Mitsunari’s skull was discovered in 1907 in Kyoto’s Sangen-in temple. Using the skull as a base, Mitsunari’s facial features were recreated in the 80’s by Dr. Nagayasu Shuichi, former Chief of engineering of the Tokyo National Research Institute of Police Sciences at the request of a descendent of Mitsunari, Mr. Ishida Takayuki. It appears Mitsunari had an elongated head and a pronounced defect in his teeth that caused them to bow outwards. The rest of his skeleton was later studied by Dr. Ishida Tetsuro, no relation, of the Kansai Idai Medical University.