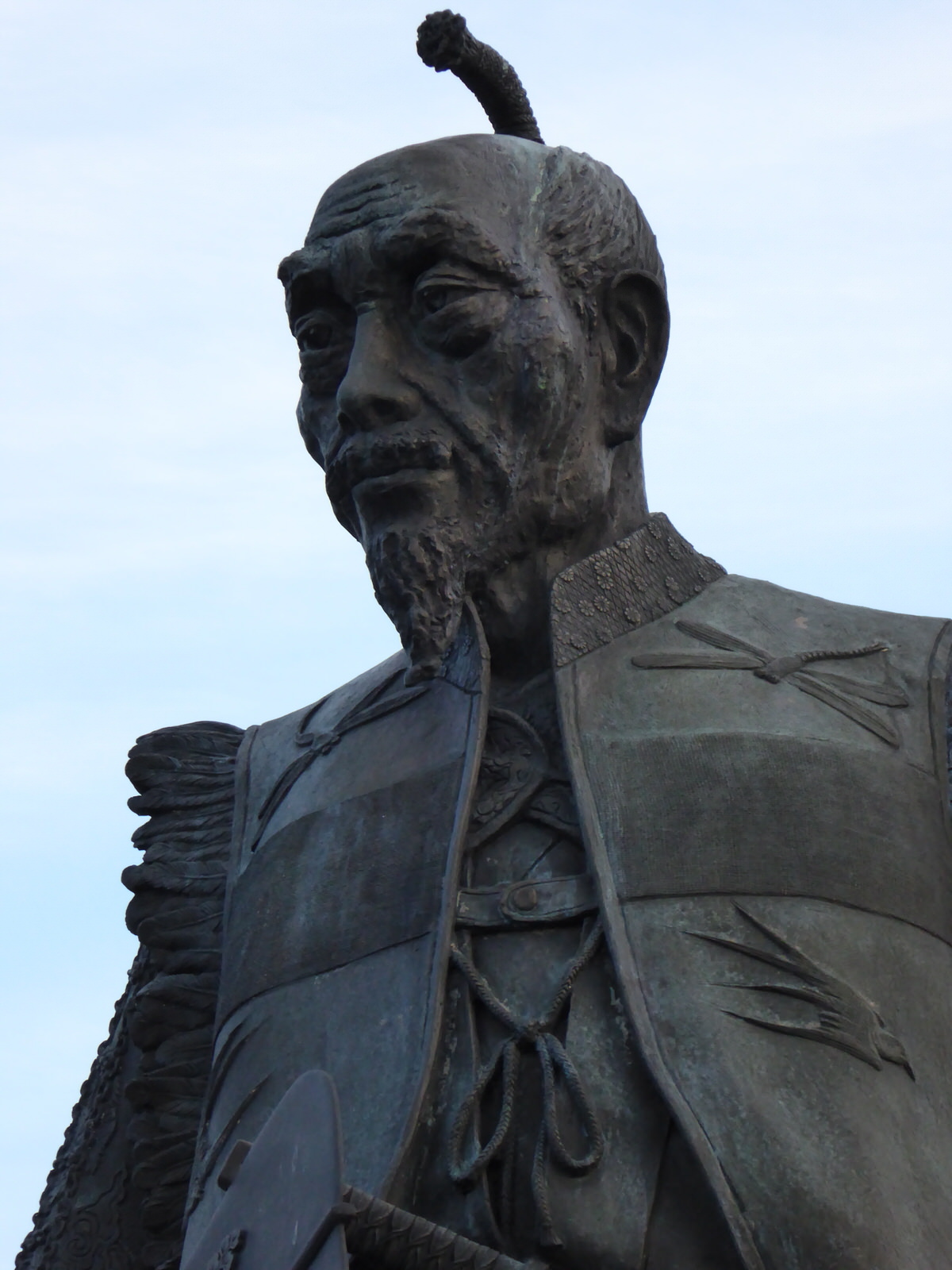 The second of the Three Great Unifiers of Japan Toyotomi Hideyoshi began life as a foot-soldier who rose in the ranks to become a samurai, general, statesman and eventually ruler of Japan.

Toyotomi Hideyoshi was born in the village of Nakamura, (Nagoya City, Aichi Prefecture) in 1536.  His father, Yaemon, died shortly after his birth, and his mother remarried a lowly  samurai who treated the boy severely. As a child he was  sent to a nearby temple to become a priest, but absconded at the age of 15  to join the army of Matsushita Yukitsuna as an ashigaru foot soldier. In 1558,  Hideyoshi was given six ryo, a fair sum of money, to purchase a coat  of chain-mail for his master. However, the young samurai used the  money to buy himself light armor and weapons and returning to Owari (Aichi Prefecture) entered the  services of Oda Nobunaga as a sandal bearer.

The story is well known that one cold winters’ morning, Hideyoshi put  his masters’ straw sandals inside his kimono to keep them warm. This story too seems to be mostly fiction, but does explain how Hideyoshi came to the attention of Nobunaga, who, impressed by his attitude, rewarded him well, noting his  intellect and promoting him as he rapidly distinguished himself.

Hideyoshi was present at the Battle of Okehazama, the siege of Inabayama, the Battle of Anegawa and a number of Oda led skirmishes. Hideyoshi was in the south-western regions of Japan laying siege to the Mori clan held Takamatsu Castle when he received word of Nobunaga’s assassination.

Upon receiving news of Nobanaga’s death at the hands of a trusted general, Hideyoshi quickly ended the siege of Takamatsu, telling the master of the flooded castle that his men could be saved and peace acquired simply by having the lord commit seppuku, ritual suicide. Once this was done and peace negotiated, he turned  his men on the traitor Akechi Mitsuhide. Hideyoshi’s forces defeated the Akechi army at Yamazaki, near Kyoto, and once Mitsuhide had been dispatched, Hideyoshi returned to  Nobunaga’s Kiyosu Castle where he met with the senior retainers of the Oda clan and nominated  Nobunaga’s infant grandson, Samboshi, as heir, assigning Nobukatsu and Nobutaka, the second and third  sons of Nobunaga as the guardians of the infant until his coming of age.

Hideyoshi’s actions became suspect as he governed in the name of young Samboshi.  He was challenged by Nobutaka, who called on Shibata Katsuie, a long trusted vassal of the Oda, to oust Hideyoshi. Hideyoshi in turn sent  Nobutaka’s brother Nobukatsu, who defeated his sibling in a siege of Gifu Castle. In 1583, Hideyoshi attacked and defeated Shibata at the Battle of Shizugatake. 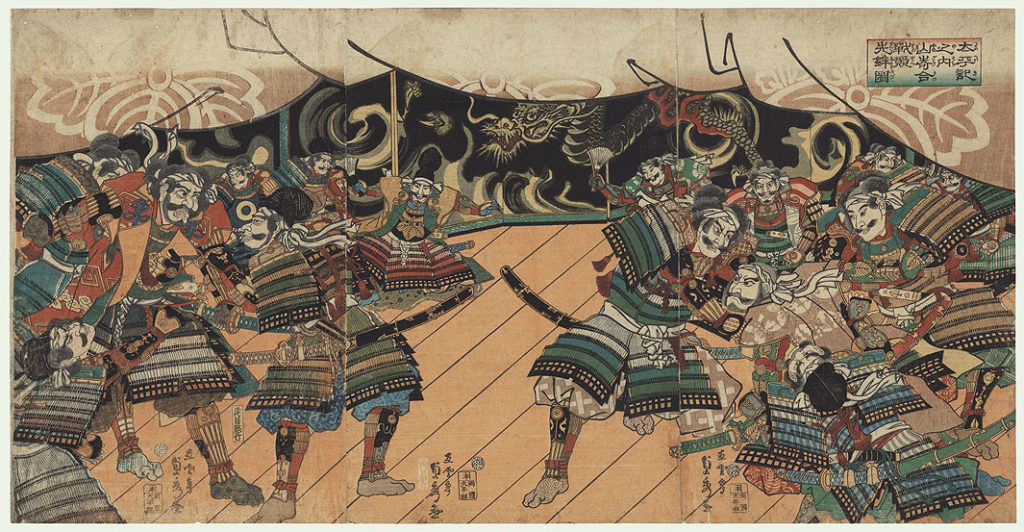 Nobukatsu was next to find fault in having Hideyoshi hold the reigns of his fathers’ hard won estates and  turned to Tokugawa Ieyasu for assistance.

The Tokugawa and Toyotomi armies faced off at Mt. Komaki north of Nagoya, and a battle was fought  around Nagakute. Through negotiation, Hideyoshi was able to sue for peace, after which he returned to  Osaka to begin occupying himself with the building of the magnificent Osaka Castle.

Hideyoshi had conquered the southern islands of Shikoku and Kyushu, and bringing the daimyo of the north under his control. He surveyed the land, standardised the currency, and to cease uprisings and war, confiscated swords from the peasantry. Hideyoshi further ordered all to remain in their respective castes, of warrior, farmer, craftsmen or merchant.

With the nation at peace, and many hundreds of thousands of samurai warriors now idle, Hideyoshi  launched two major campaigns against the Korean peninsula. When these men returned to Japan,  however, they found political circumstances had changed dramatically. 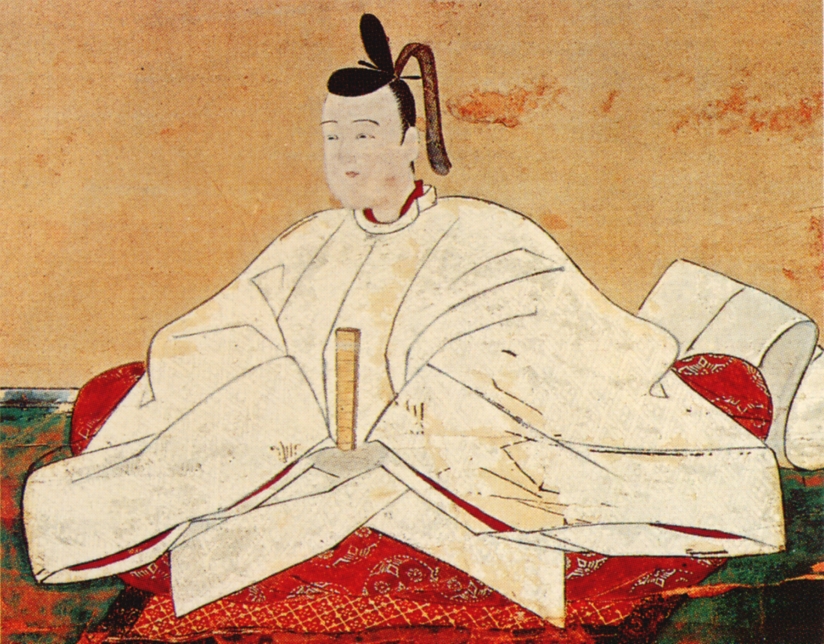 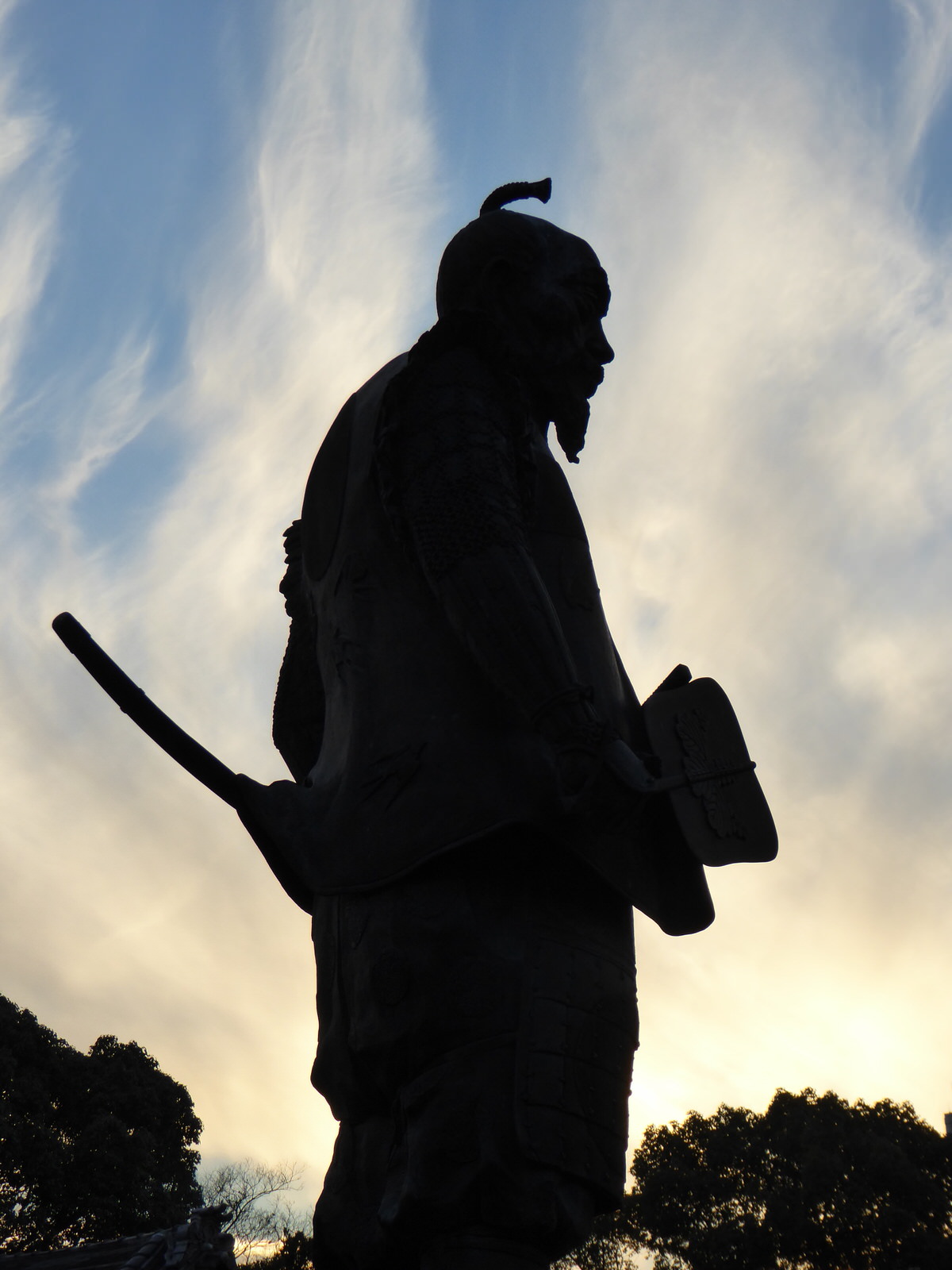 It was at Fushimi Castle on September 18, 1598 that Hideyoshi died at the age of 63 leaving his vast  empire to his five year-old son, Hideyori. Determined that the Toyotomi family should retain power,  Hideyoshi had appointed a board of five regents, the Go-Tairo, to rule in his son’s stead. It was the actions  of one of those regents, Tokugawa Ieyasu, who would again bring the nation to civil war, and then emerge victorious.

Toyotomi Hideyoshi was not a physically strong man.  He had risen rapidly from being a lowly sandal-bearer  to one of the most respected strategists in the land by merit of a  strong intellect that allowed him to take over the helm from Nobunaga  and eventually unify the nation.

Hideyoshi stood 154cm high, and had type O blood. He is said to have had a birth defect having 6 fingers on one hand. Although he is often shown sporting a beard, he was unable to grow one himself, and so the beard was a stuck-on hairpiece. History books tell us his liege, Nobunaga, called him Saru, or Monkey, however that is apocryphal, as diaries and letters show Nobunaga referred to him as the “Bald Rat”.