Komaki Castle, properly known as Komakiyama Castle (Aichi Prefecture) was constructed in 1563 during the warlord Oda Nobunaga’s expansionist efforts. His plans were to defeat the neighboring warlord, Saito Tatsuoki, and take the province of Mino (Gifu Prefecture). Oda Nobunaga was a military genius, and realized that in order to expand his territories, it was important for him to continually relocate to more key positions. For over ten years, Nobunaga had remained at the strategically important Kiyosu Castle in modern-day Aichi Prefecture and having set his sights on Mino, now Gifu Prefecture, he chose to move his base of operations to a more northerly location. The story goes that Nobunaga sensed his generals would object to moving far from their present homes around long established Kiyosu, and so he suggested that the new castle be built atop the distant and very steep 293m high Mt. Ninomiya near Inuyama. As expected, his men balked at the idea, and so he suggested the closer, lower, more convenient Mt. Komaki instead. Unable to refuse their lord a second time, Komaki was decided upon. 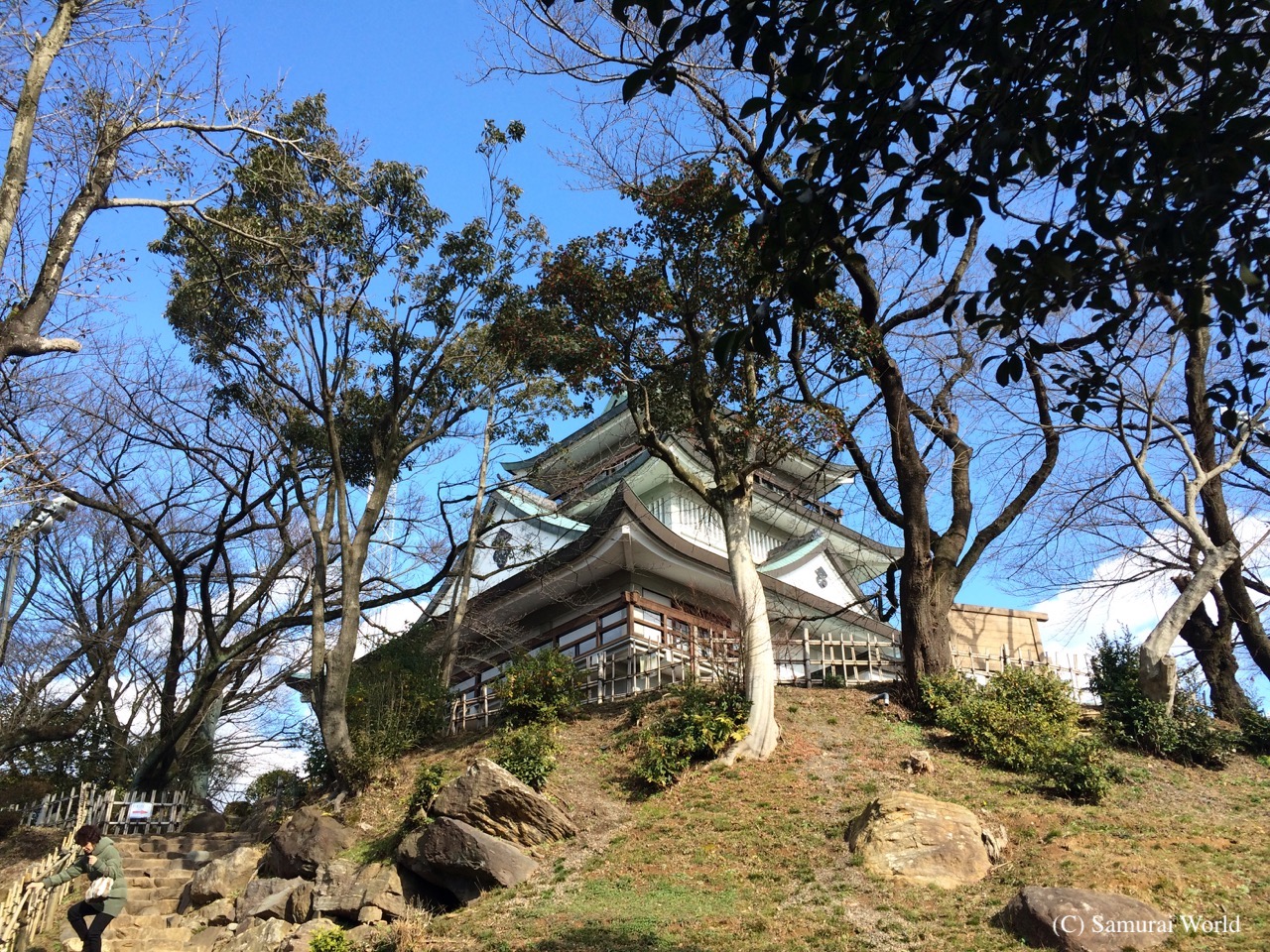 The Komaki position was ideal, situated on top of an 86 meter-high hill providing a superb, unhindered view right across the vast Nobi Plain, and surrounding areas, and surrounded by a small river, supplying water. Its proximity to Mino would also serve to psychologically upset the enemy. 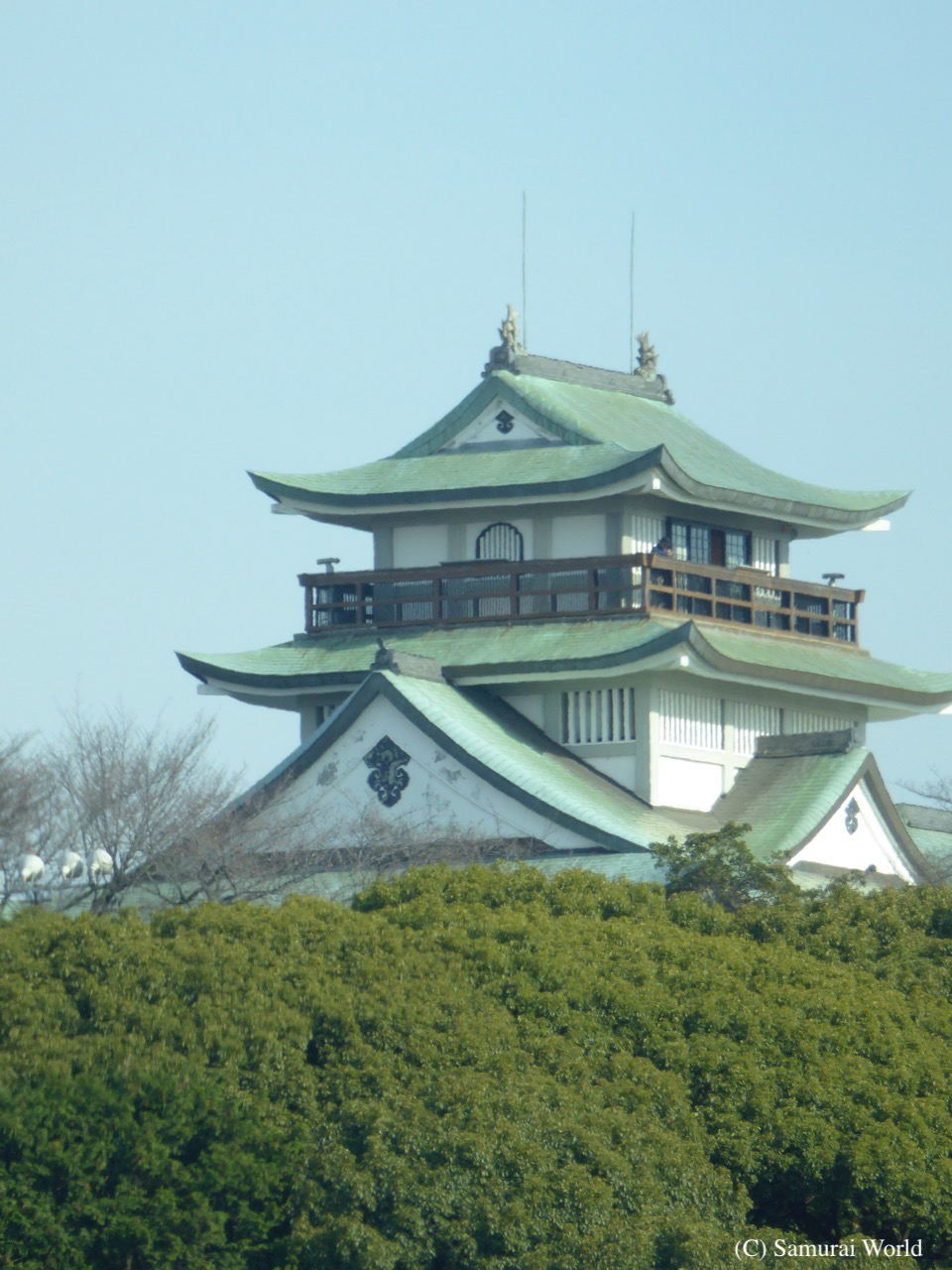 Komaki’s keep was reconstructed in 1968 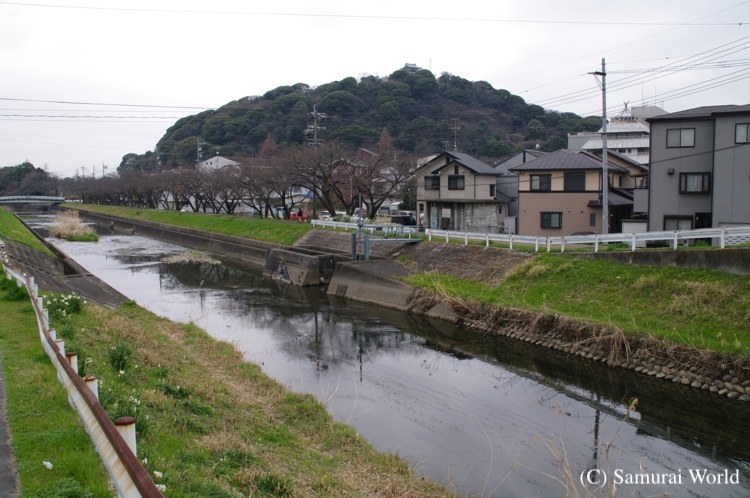 Although Nobunaga only used the castle for four years, it appears he had expected to be based in Komaki much longer. The castle was very well designed, with many of the features showing a great deal of innovation.

This was the castle that would serve as a template for Nobunaga’s most superb castle at Azuchi 13 years later. The designs and layout of both castles feature many similarities. Recent research and excavations show that Komaki was one of the first castles to make extensive use of defensive stonework that later became standard in all castles.

Of particular note were the large rocks stacked in 3 concentric rows around the top of the mountain. The upper ring surrounding the central bailey stood 3-4m high, the middle and lowest rings were both about 2m high. One large rock weighing 190kg was found to have some words written on it in sumi ink. It was a name, Sakuma, believed to be the name of an Oda samurai tasked with construction of the castle walls. This is the oldest known ishigaki (stone wall) marking known. Since that discovery, all stones since unearthed at the site have been carefully washed and inspected for more brush marks. 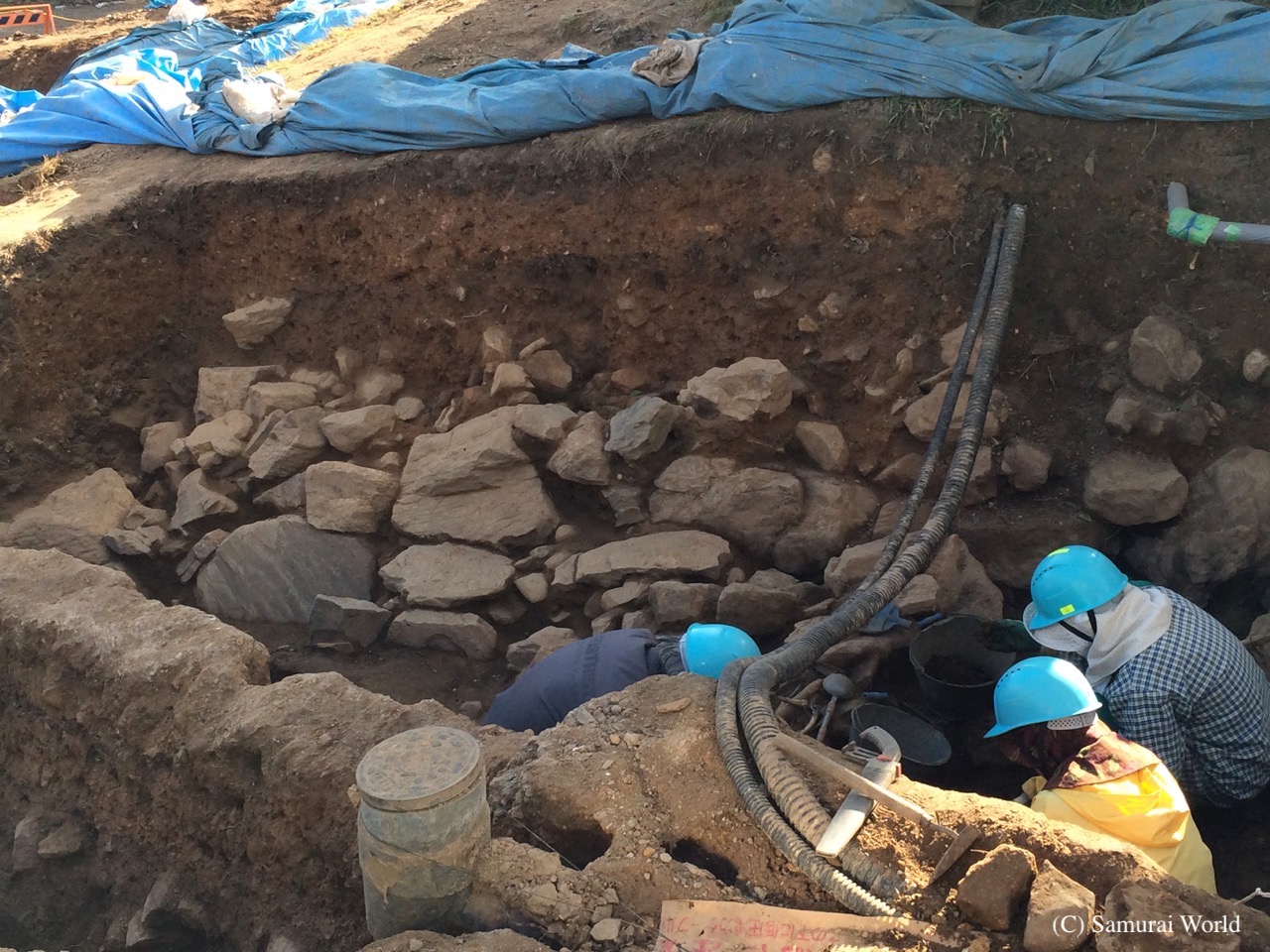 Excavating the stone walls of Komaki 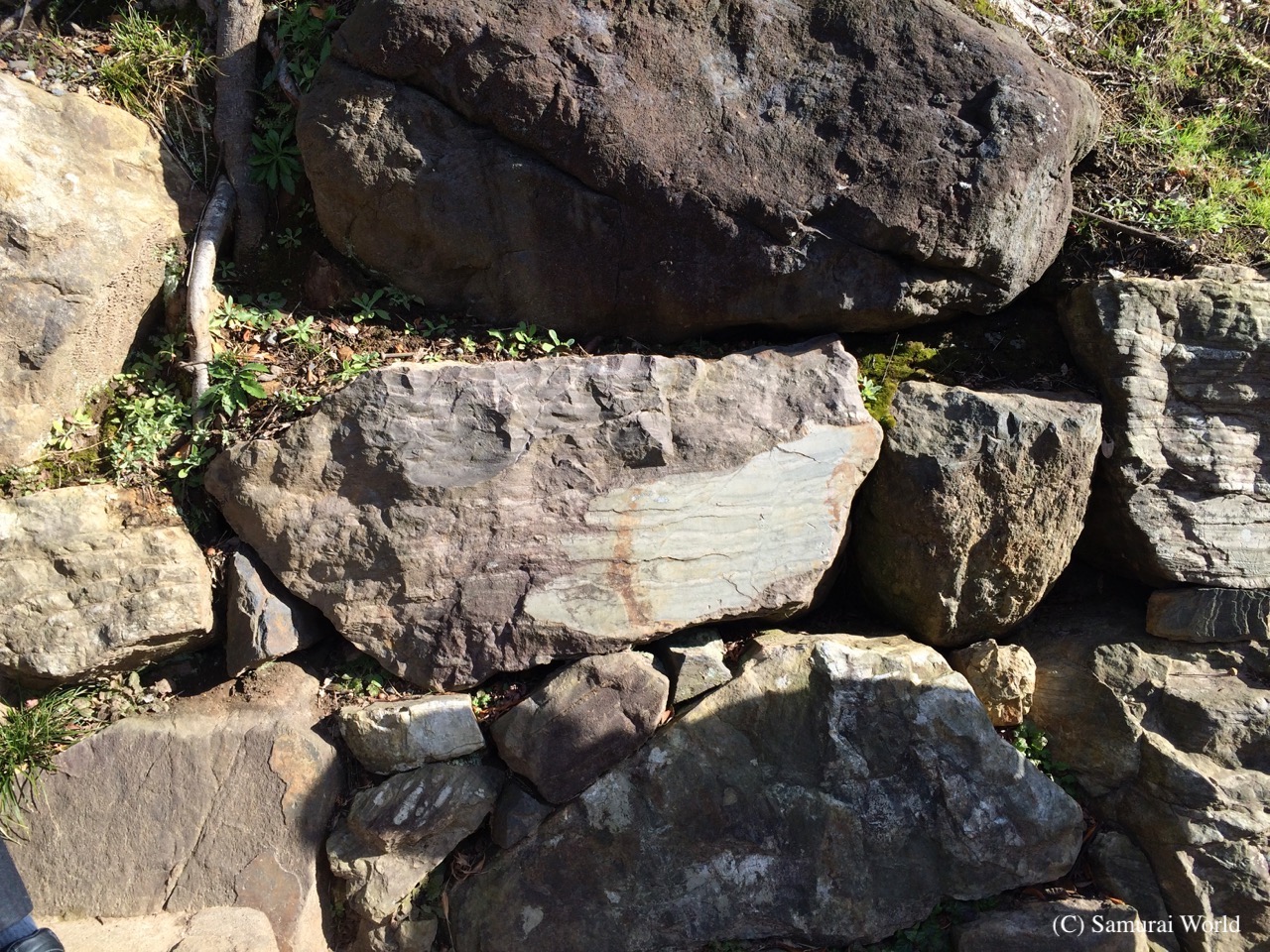 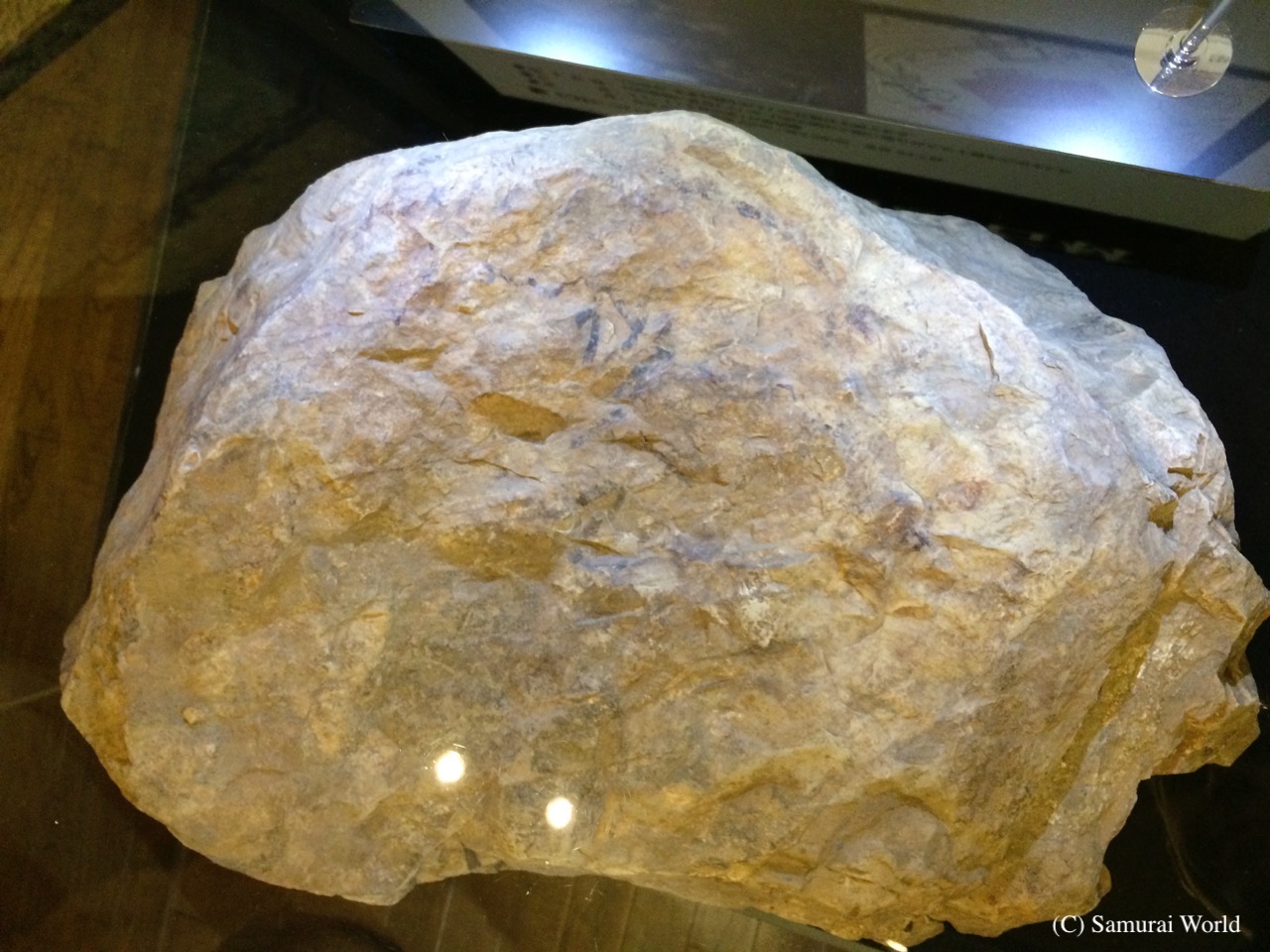 The Sakuma Stone, with the name Sakuma written in ink

Aside from the stone walls, the castle featured a 5.5m wide Otemichi, a main path leading straight up the mountain. Either side, Nobunaga had positioned the homes of his top retainers, ensuring that all his men were central to his needs. This was another feature seen at Azuchi years later.

Komaki was also Japan’s first castle to have a specially built Jokamachi, (Castle Town) laid out below it. Partially defended by surrounding moats and 2m high earthen walls, the town was laid out in a grid-like pattern south of the mountain. Nobunaga’s palace is believed to have stood on the flat, moat protected precincts east of the mountain fortress. Interestingly, the layout of the castle grounds, as well as that of the castle town was used again, when Nobunaga built Azuchi Castle, although on a much larger, more elegant scale. Komaki was the trial, Azuchi was the practice made perfect. 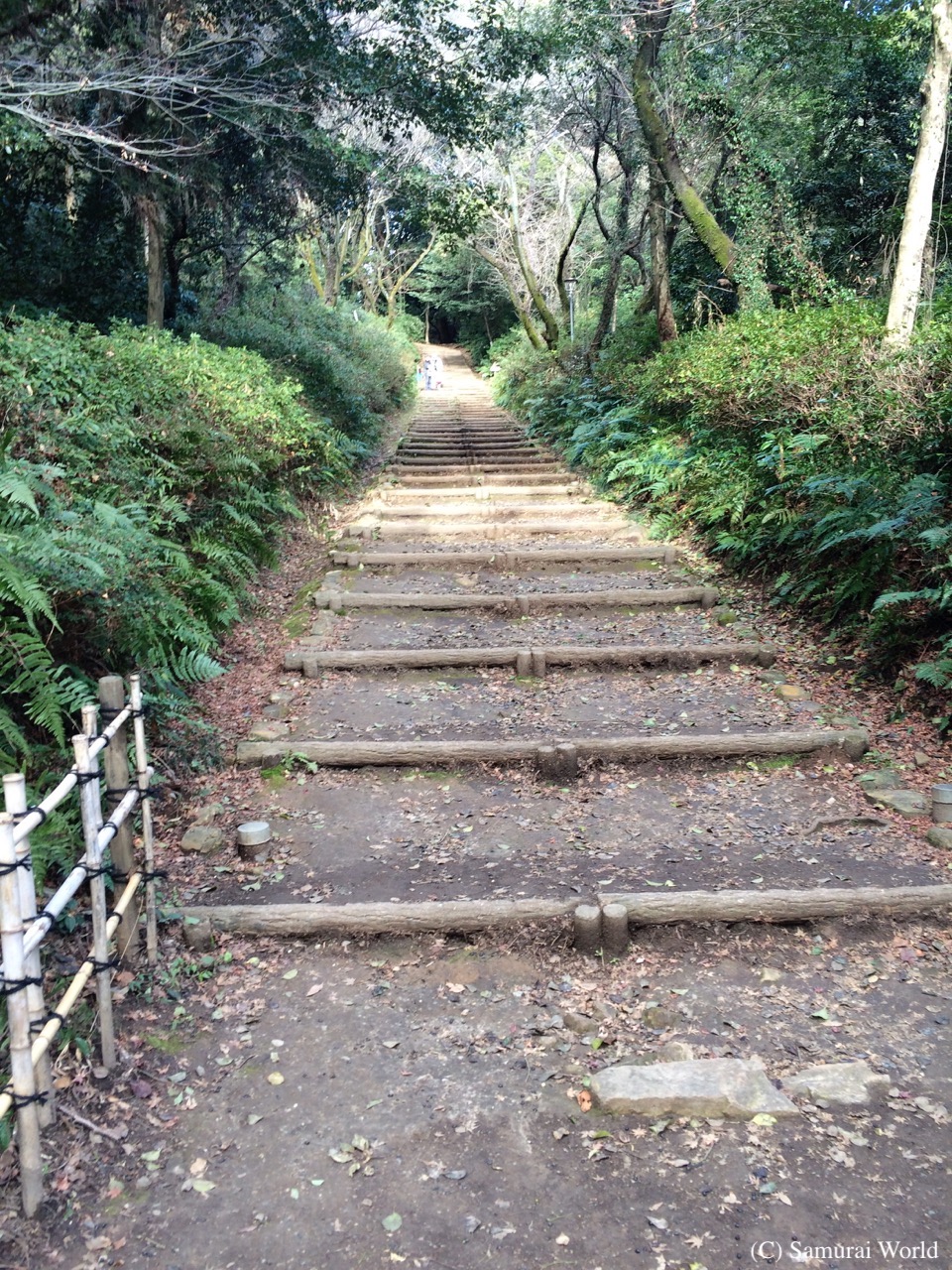 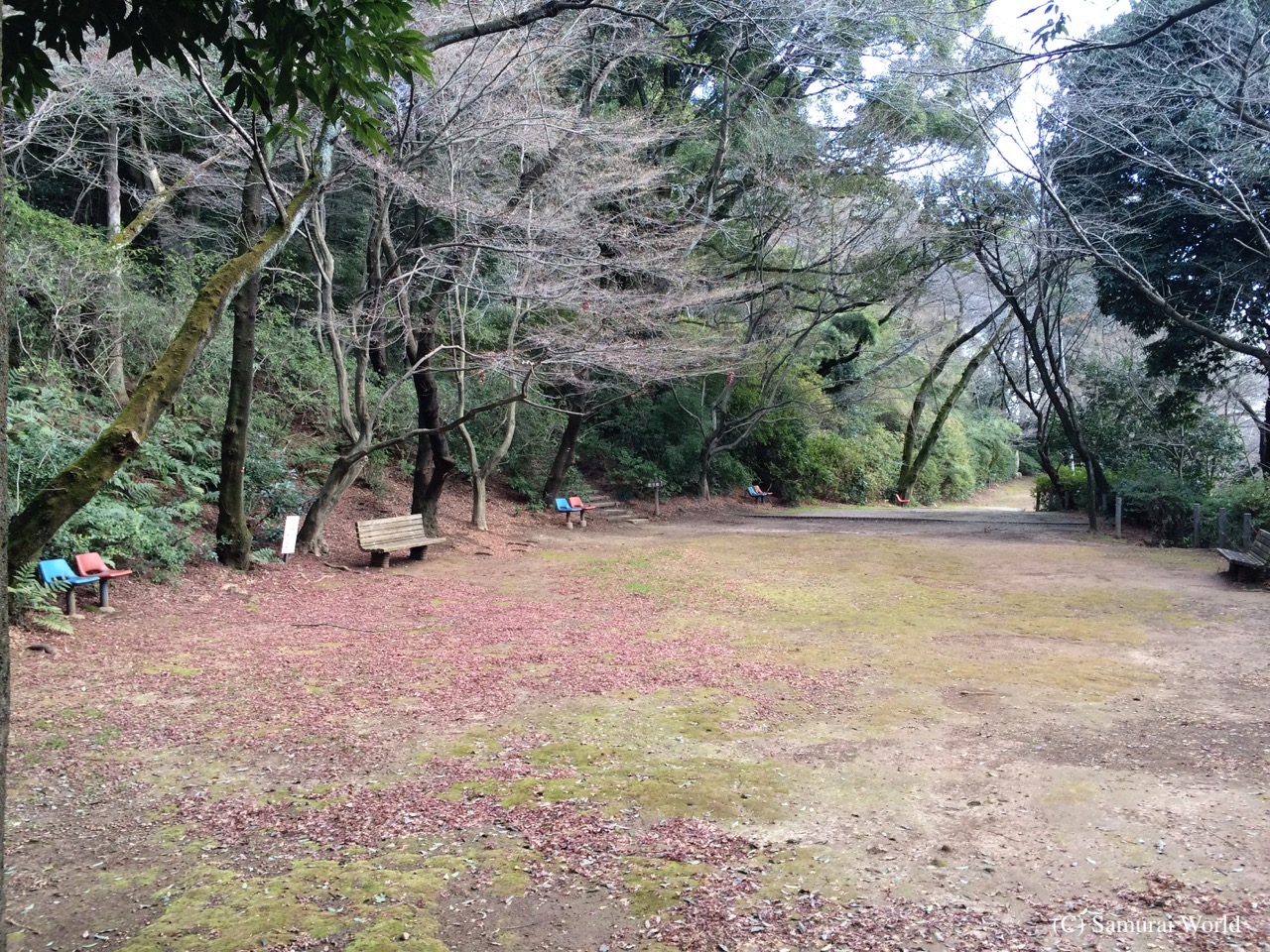 Terraces up the southern face of the mountain, either side of the Otemichi were the sites of the homes of various retainers 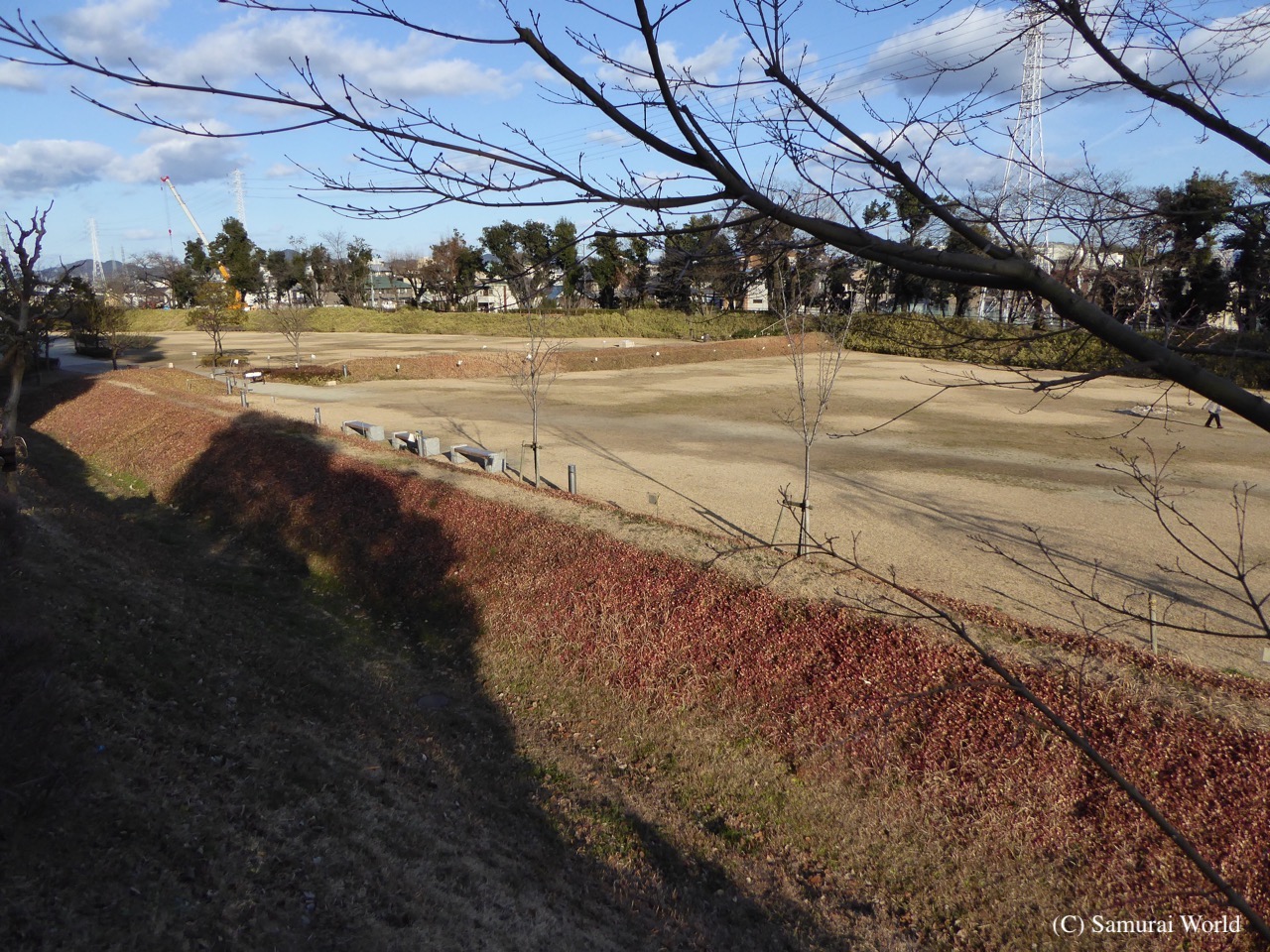 The wide, moat surrounded precincts east of the mountain are believed to have been the site of Nobunaga’s palace.

Komaki Castle was abandoned in 1567 when Nobunaga managed to oust the Saito clan from what would be renamed Gifu Castle, making that his base of operations. Some 17 years later, many thousands of samurai returned to Komaki for the battle of Komaki Nagakute.

Komaki Castle didn’t see action until two years after Nobunaga’s death, when it became one of the sites of the of the Battle of Komaki and Nagakute, a historically important conflict that took place in 1584, initially as a siege between the forces of Oda Nobunaga’s general and successor, Toyotomi Hideyoshi, and his former ally, Tokugawa Ieyasu. Ieyasu had set his war camp on the long abandoned Komaki Castle site. There was little fighting at first, but the battle escalated later, becoming full-blown around the Nagakute region. 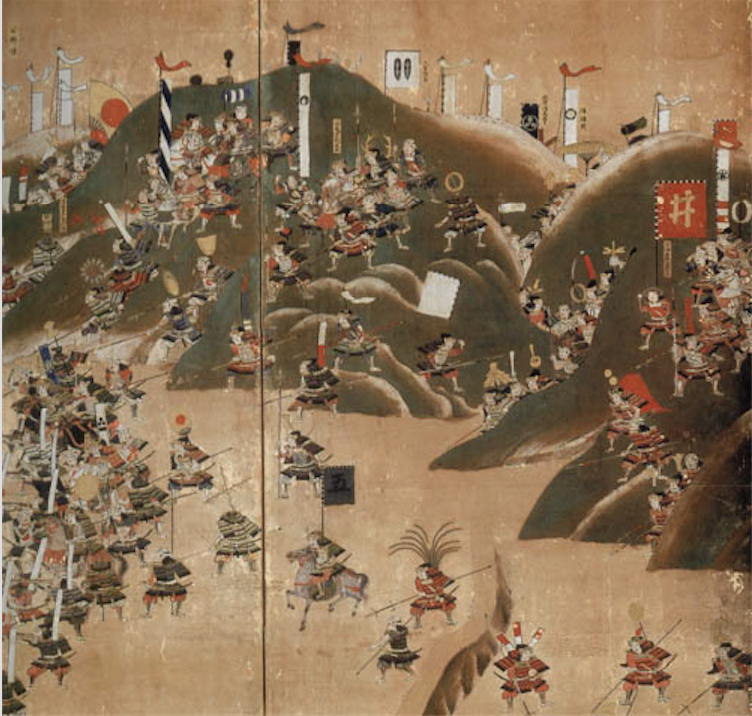 The 21 Hectares of tree-covered mountain is preserved as a National Historical Site. The three-story keep on top of Mt. Komaki is a 1968 concrete reconstruction. Nothing like this ever graced the mountain at the time of Nobunaga or Ieyasu. There is little English information, but there are some interesting relics on display inside the keep, and an easy to understand diorama of the Battle of Komaki and Nagakute that took place around the base of the hill worth viewing. Ongoing research means that archeological digs are often taking place, and new gates, paths, stone walls and details are being discovered all the time at innovative Komakiyama Castle. 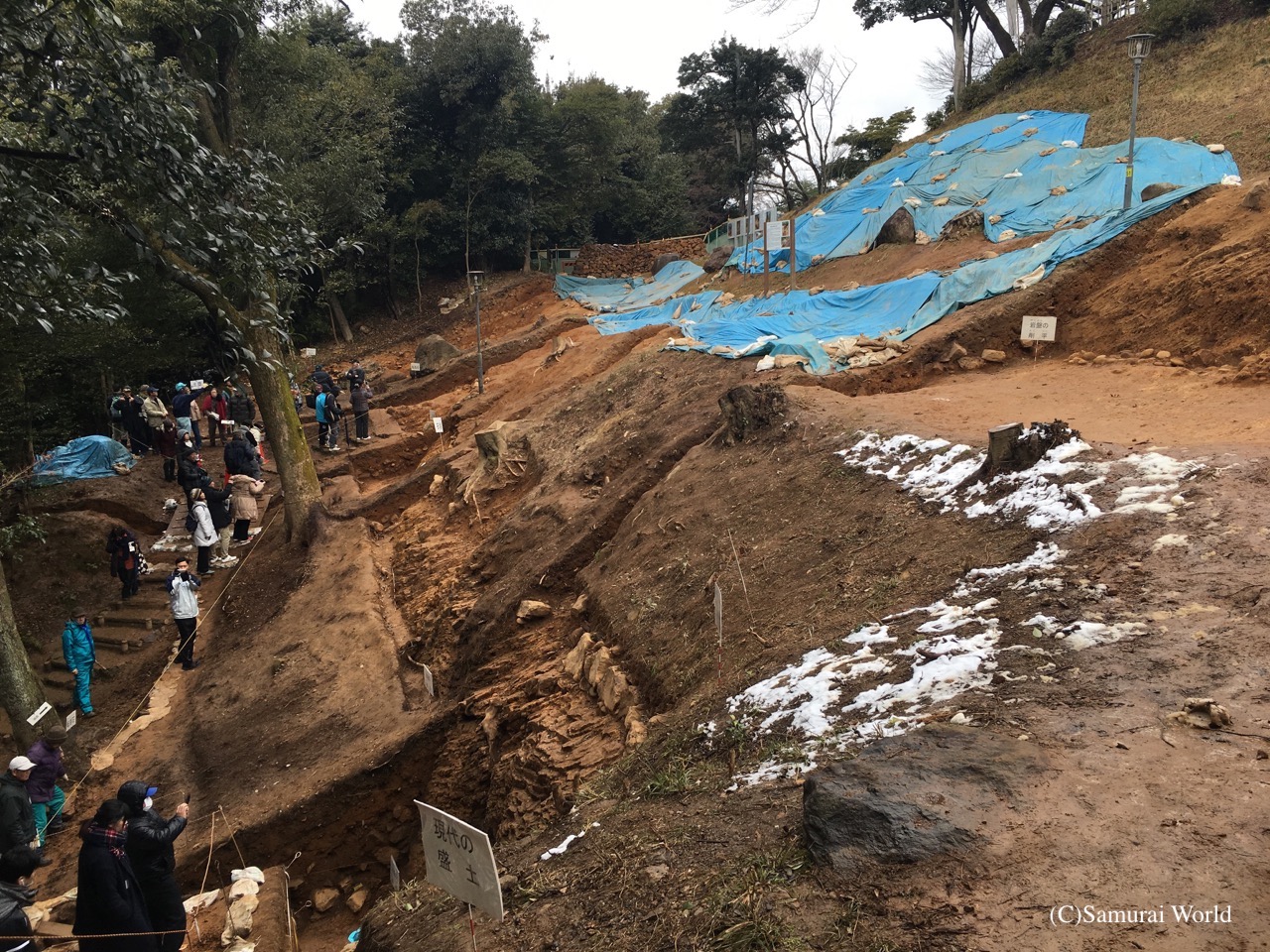 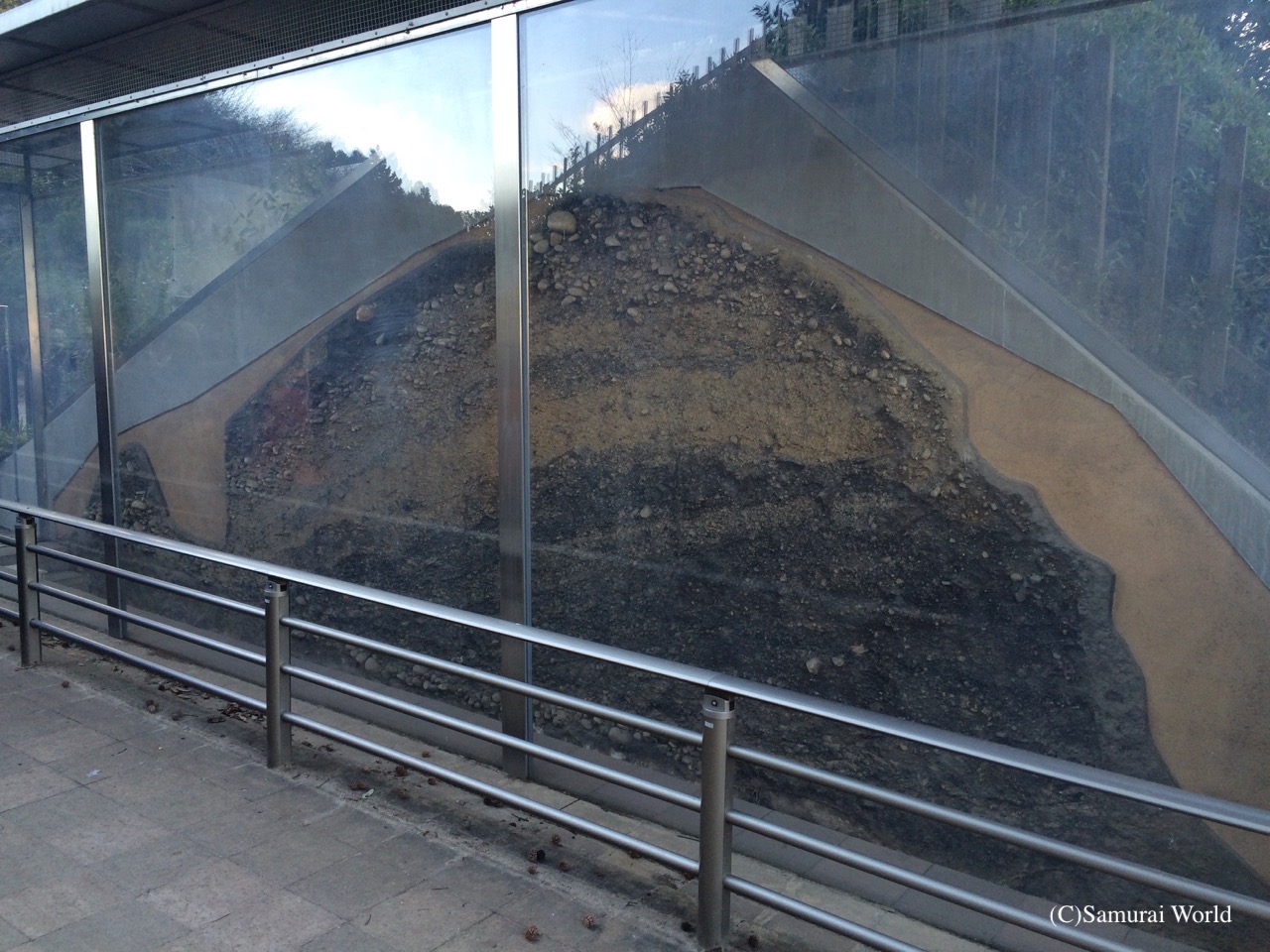 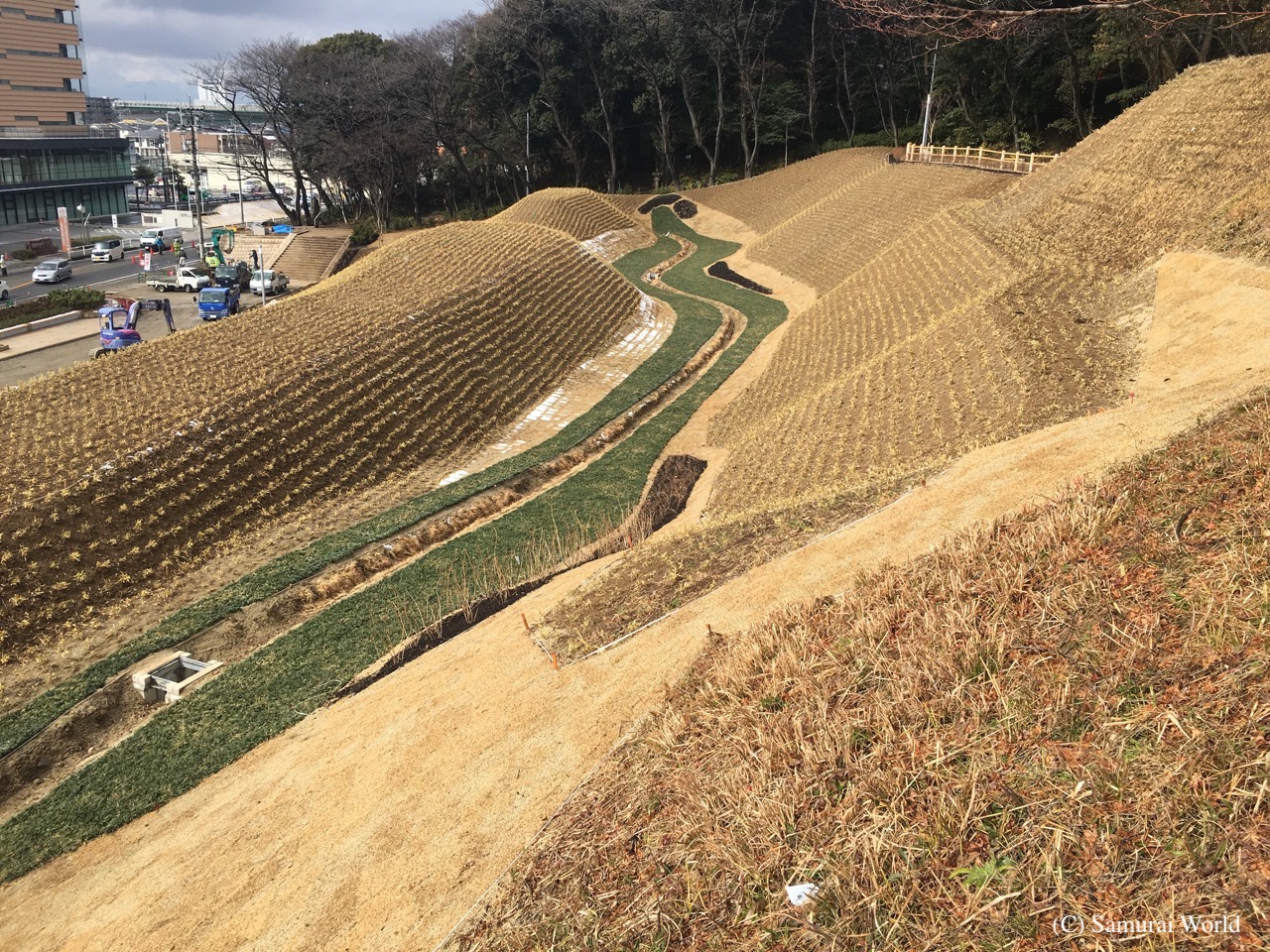 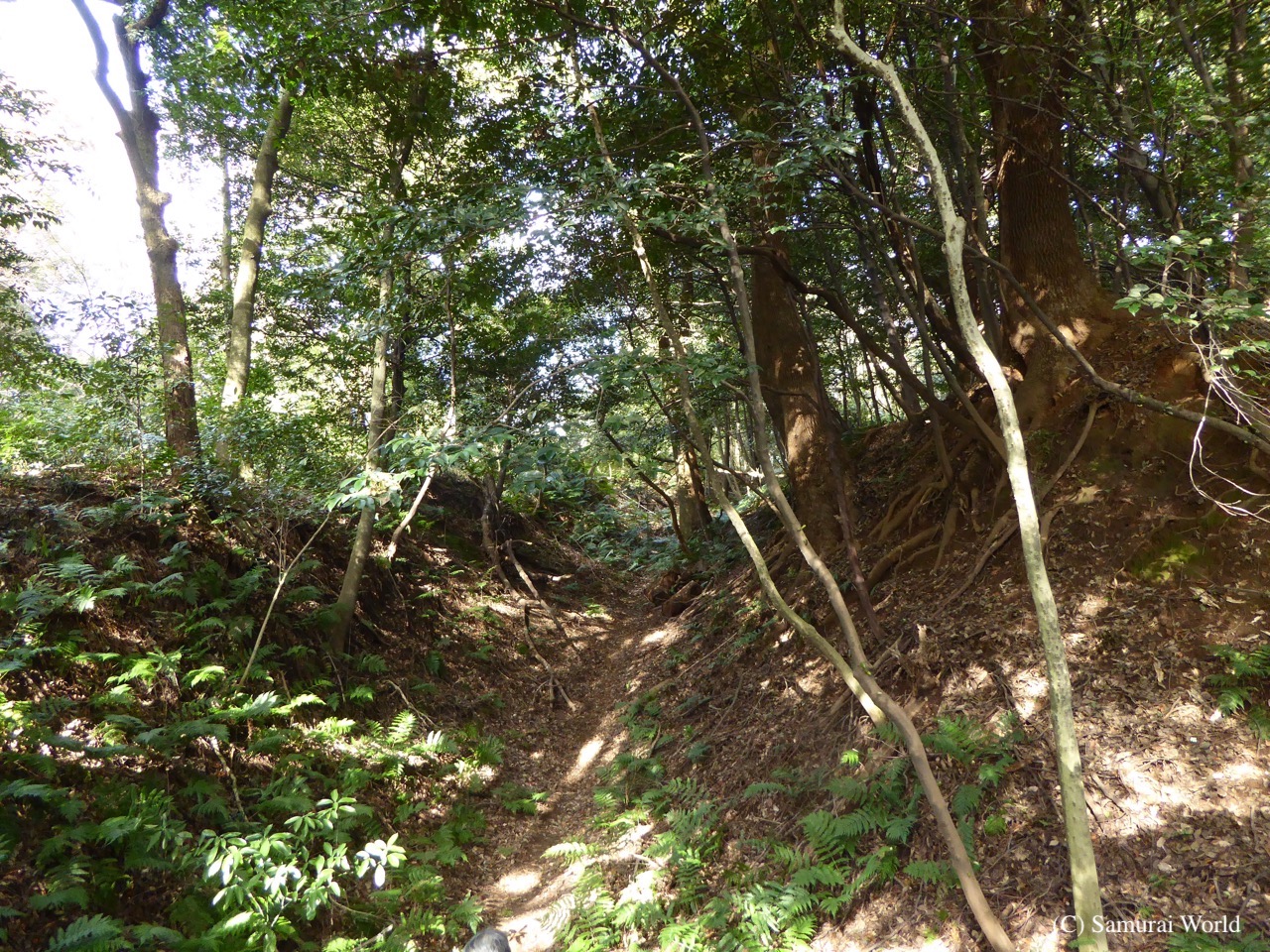