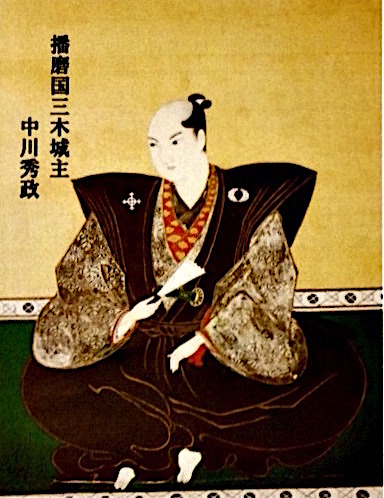 In 1572, Kiyohide and his sons surrendered their lands to the Oda forces who had marched on Kyoto, however they soon rebelled, and six years later were forced to ally themselves and serve Oda Nobunaga. Following Nobunaga‘s death, the family served Toyotomi Hideyoshi.

Hidemasa became head of the Nakagawa clan aged 15 when his father was killed in the Battle of Shizugatake. The following year, 1584, Hidemasa proved his mettle in the Battle of Komaki and Nagakute, and recieved further praise from Hideyoshi for his actions in the Shikoku campaign in 1585. For that, his holdings were increased from 50,000 koku at Settsu to 65,000 and land at neighboring Miki, Harima Province (also modern-day Hyogo Prefecture).

Nakagawa Hidemasa saw further action in the Kyushu campaign of 1587, and was among the total 220,000 besiegers against 82,000 samurai holed up in Odawara Castle during the siege of Odawara in 1590. His final days were spent as one of the leaders of the 158,000 troops Hideyoshi sent to annex Korea in 1592, losing his life during the Battle of Bunroku. He was 25 years old.