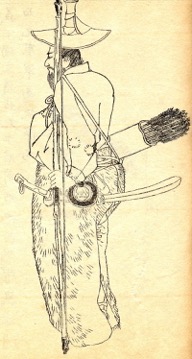 Minamoto no Yorinobu was born a member of the influential Minamoto clan, son of the statesman Minamoto no Mitsunaka, an acting governor of ten provinces, Commander in Chief and Defender of the Northern Districts, and one of the most affluent and influential courtiers of the Heian period.

As a samurai commander serving the Fujiwara regents, Minamoto no Yorinobu was able to use his military might to achieve the Fujiwara’s and courts orders.

Yorinobu’s exploits were partly recorded in the 12th century collection of historical records known as the Konjaku Monogatarishu, a 31-volume anthology of over 1,000 articles. The book tells of Yorinobu suppressing an uprising by the Vice Governor of Kazusa Province (modern day Chiba Prefecture) Taira no Tadatsune, who attempted to increase his land holdings by attacking neighboring provinces.

Minamoto no Yorinobu was ordered to quell this uprising, but refused the order for personal reasons, and so Taira no Naokata and Nakahara Narimichi were sent in his stead. Both failed to achieve the directive, and so the Imperial Court once again requested Yorinobu take action. While Yorinobu’s forces were preparing to attack, Taira no Tadatsune, realizing he was no match for Yorinobu, submitted his surrender, and the rebellion was quashed with little action.

This served not only the Imperial Court, but Yorinobu well, furthering his reputation and widening the Minamoto sphere of influence.

Minamoto no Yorinobu died June 1, 1048, aged 79.
His tomb is located at the Tsuhou-ji Temple in Habikino, Osaka.