Born in 1527 in Ajiki village of Kasugai, modern-day Kita Ku, Nagoya City, Ota Gyuichi, also known as Ota Matasuke Nobusada, was raised in the Jokan-Ji Temple before joining the Oda forces as a valued samurai and served as a most able administrator, highly trusted by Oda Nobunaga.

Known as a skilled archer, Ota Gyuichi was active on the battlefield and publicly acknowledged by Nobunaga following a number of his exploits in battle. It is said that during a particular battle, Gyuichi scrambled to the top of a thatched roof house, and from his elevated vantage point, loosed off a volley of arrows at the enemy. This caught the attention of Nobunaga, who then had Gyuichi instruct him in archery.

However, what Ota Gyuichi is best remembered for are the books he wrote, one of the most famous being the Shincho Koki, translated into English as “The Chronicles of Lord Nobunaga”, a diary of Nobunaga’s actions and achievements. In the Shincho Koki, Ota often writes of Nobunaga from first hand experience, being on the battlefield, or at council of war meetings with his lord. 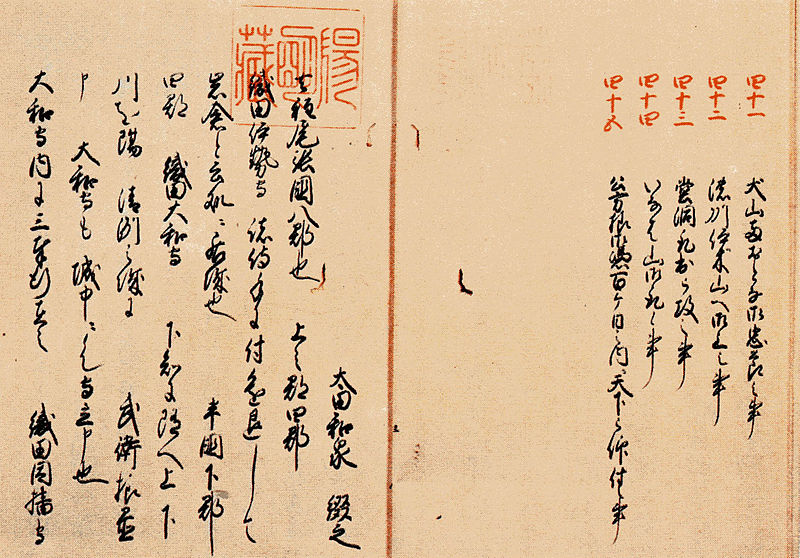 Following Nobunaga’s death, he pioneered investigative journalism in Japan by interviewing people associated with the incident to discover the details in order to record them as faithfully as possible. Among the people he interviewed were two girls, considered by many as unimportant, who had been part of Nobunaga’s entourage and with him until the very end, when Nobunaga told them to flee.

Much of Gyuichi’s original work was destroyed in WW2 aerial fire-bombing raids, however the Ota-ke Bon, an Ota family diary still exists, as do all 15 copies of the Shincho Koki. Ota’s writings have made a significant contribution to modern understanding of the Sengoku period and it’s history, and one of 16th Century Japan’s most important figures, Oda Nobunaga.

Shincho Koki made him famous, but he also wrote a book on Toyotomi Hideyoshi, titled Taikosama Gunki No Uchi (The Military Records of the Imperial Regent) as well as Sekigahara Gokassen no Soshi, being a history of Tokugawa Ieyasu’s decisive Battle of Sekigahara.

Ota Gyuichi died aged 87, and his grave can be found in the Funichi Temple, in Ikeda City, Osaka. Ota Gyuichi doesn’t just appear in the history books, he wrote them!