Kakegawa Castle was a regular sight for travelers on the old Tokaido, the major route linking the samurai era center of government in Edo (Tokyo) and the capital of Kyoto. Travelers would pass through 53 checkpoints and post towns along the highway, stopping only at government approved inns along the way. The 26th stop from Edo’s Nihonbashi, the great bridge from where national distances were measured, was the post town of Kakegawa. Kakegawa also served as a stop on the salt road that ran through Shinano Province (Nagano Prefecture). Watching over that important post town, the salt route, and the strategically vital Tokaido route was Kakegawa Castle. In fact, the Tokaido crossed through the eastern section of the actual castle grounds. Those walking the route would have to cross a moat, enter the castle grounds, then exit again, ensuring the security of the Tokaido. 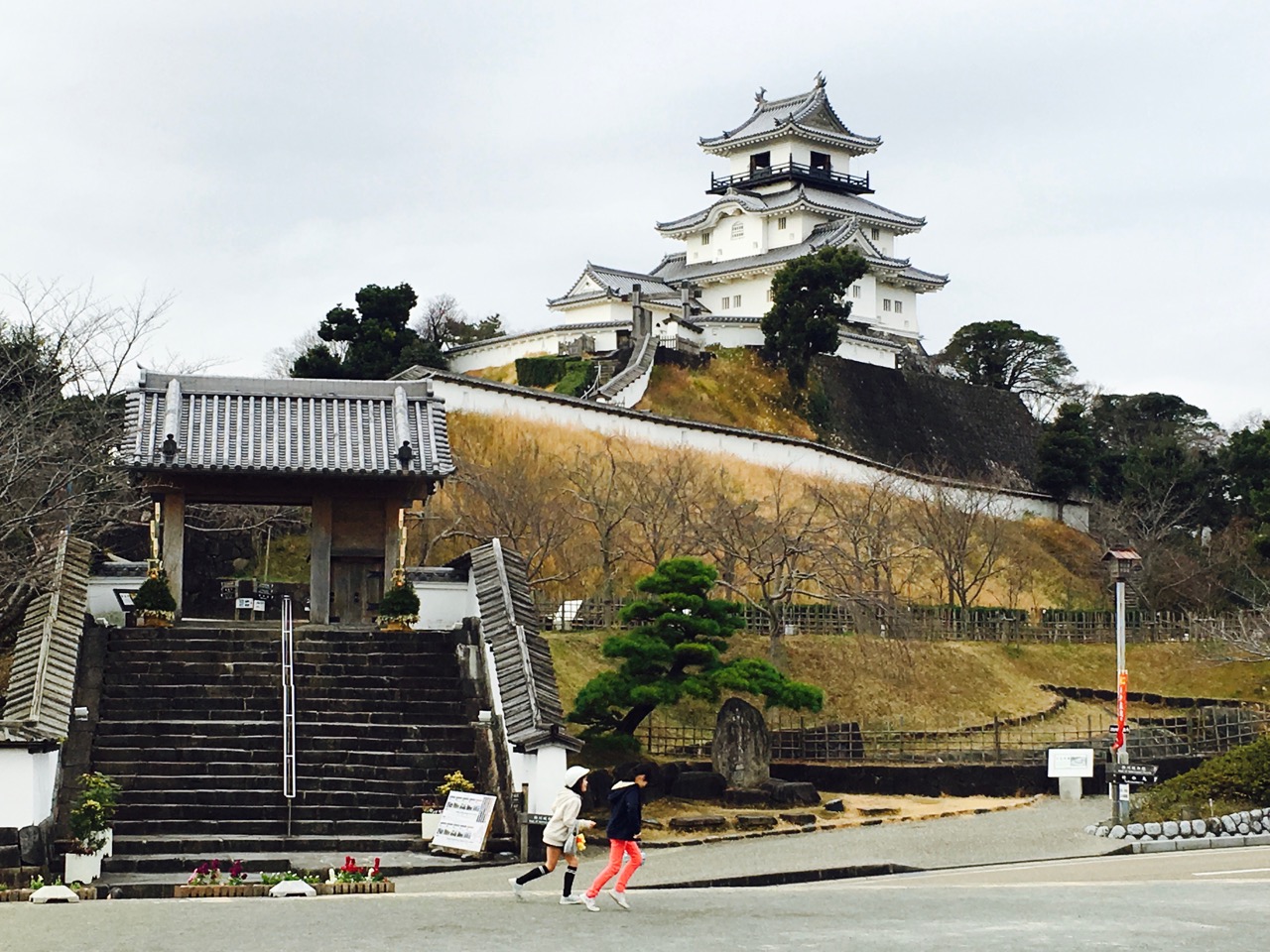 The first version of Kakegawa Castle was built around the 1470’s by Asahina Yasuhiro, a samurai under the command of the powerful Imagawa clan of Suruga (Shizuoka Prefecture). Following the fall of the Imagawa clan at the Battle of Okehazama in 1560 at the hands of Oda Nobunaga, the lands of the Imagawa were divided between the rival Tokugawa and Takeda clans, and although Kakegawa was within Takeda territory, it was surrendered peacefully to the Tokugawa in 1568. Tokugawa Ieyasu counted the castle among his many until 1590, when Toyotomi Hideyoshi had gained control of most of the nation, and literally forced Ieyasu to accept domains in the Kanto region, based in Edo, and cede his other provinces. 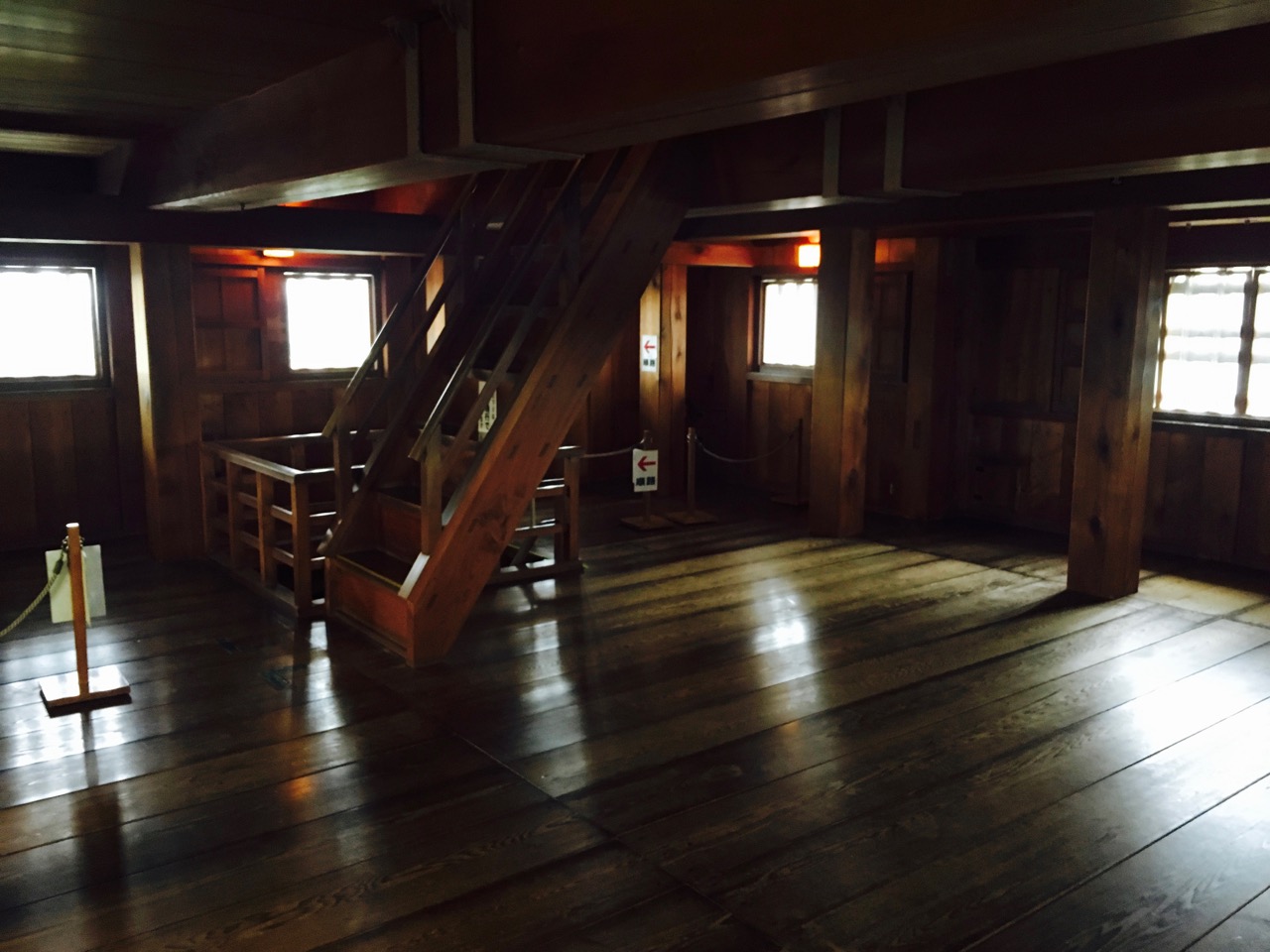 Kakegawa was then commanded by Toyotomi retainer Yamanouchi Kazutoyo (Yamauchi Katsutomo), who completely redesigned and improved Kakegawa Castle. The remaining stone walls, moats, and the basic layout of the castle dates from Yamanouchi’s time. The keep built by Yamanouchi was destroyed in an earthquake in 1604, and not rebuilt until 1621.

The Battle of Sekigahara, fought in 1600, saw control of the nation fall into the hands of the victorious Tokugawa Ieyasu. Yamanouchi was transferred to Kochi in Shikoku, and Hisamatsu Sadakatsu, Tokugawa Ieyasu’s half brother became the first of a succession of mostly Tokugawa related masters to rule until 1746, when seven generations of the Ota clan held the fortress until the end of the Edo period.

The castle was well maintained throughout the end of the feudal period, but was extensively damaged in the great Ansei Earthquakes of 1854. Apart from the keep, many of the buildings were repaired by 1861, and following the end of the Tokugawa rule, were used as regional administrative offices.

The original Otemon guard house still stands, albeit in a different position, as the Kakegawa City hall was built on the site of the Otemon Yagura, which was moved to its present site. Six gates once guarded the central precinct. The Otemon has been reconstructed, although about 50m west from its original position. The third gate, the Fuki-no-Mon is now part of the Enman-ji Temple. The gate was transferred there at the beginning of the Meiji Period, but was lowered by 70cm. Likewise, the Ote-San-Mon was given to the nearby Yusan-ji Temple in nearby Fukuroi where it remains. 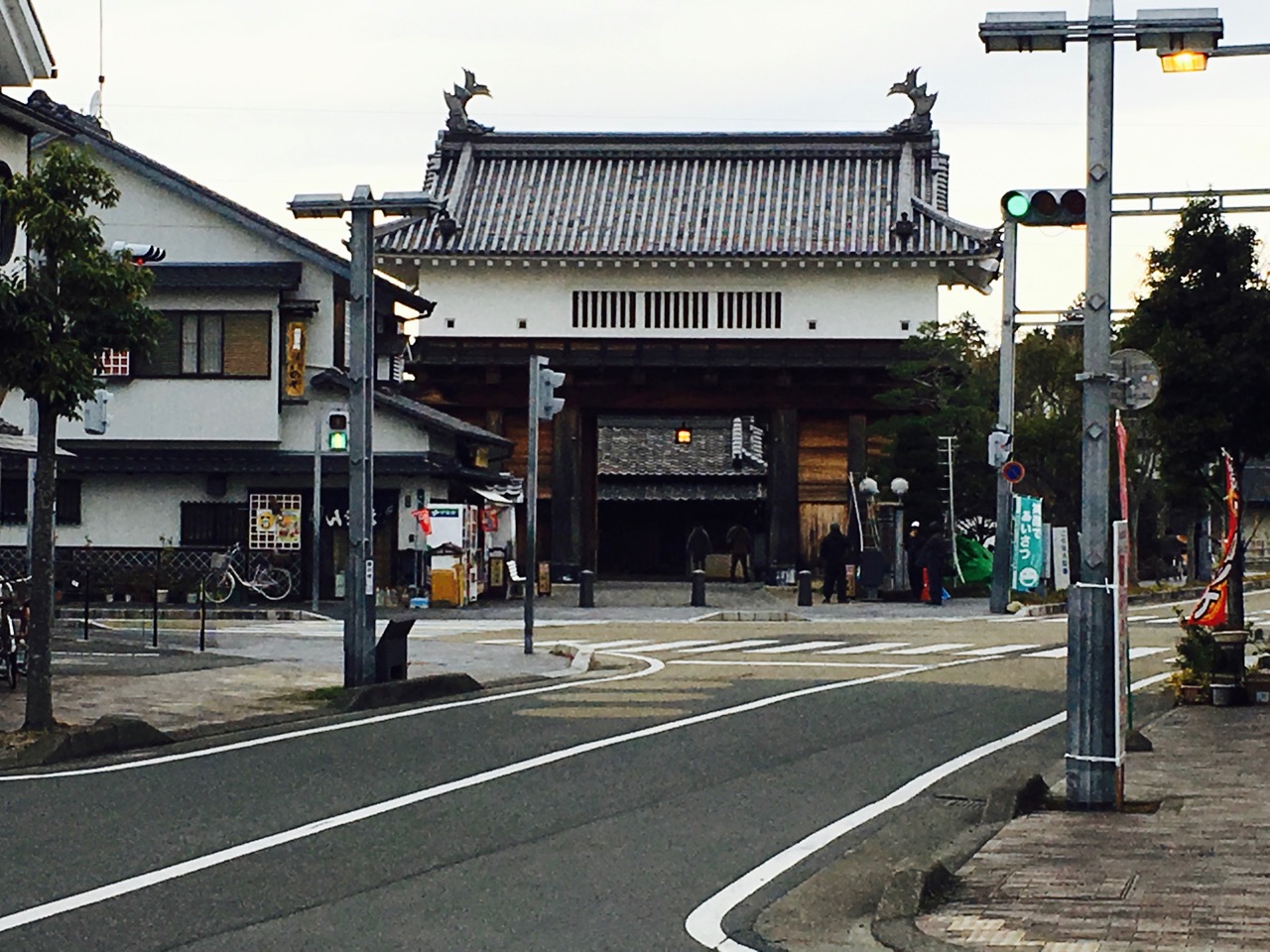 The Ni-no-Maru Goten, the simple but elegant palace on the flatlands below the hill remains to this day. It was built by the Daimyo Ota Sukekatsu after the 1854 earthquake, and before the collapse of the shogunate, making it among the last of the truly original Edo period castle structures. It is registered as a National Important Property. The land and a substantial amount of money to finance rebuilding of the castle were left to the city by a wealthy resident. With local donations. in 1994, the keep, some yagura watchtowers and walled sections were rebuilt in the traditional manner, becoming the first post-war castle to be constructed in wood. 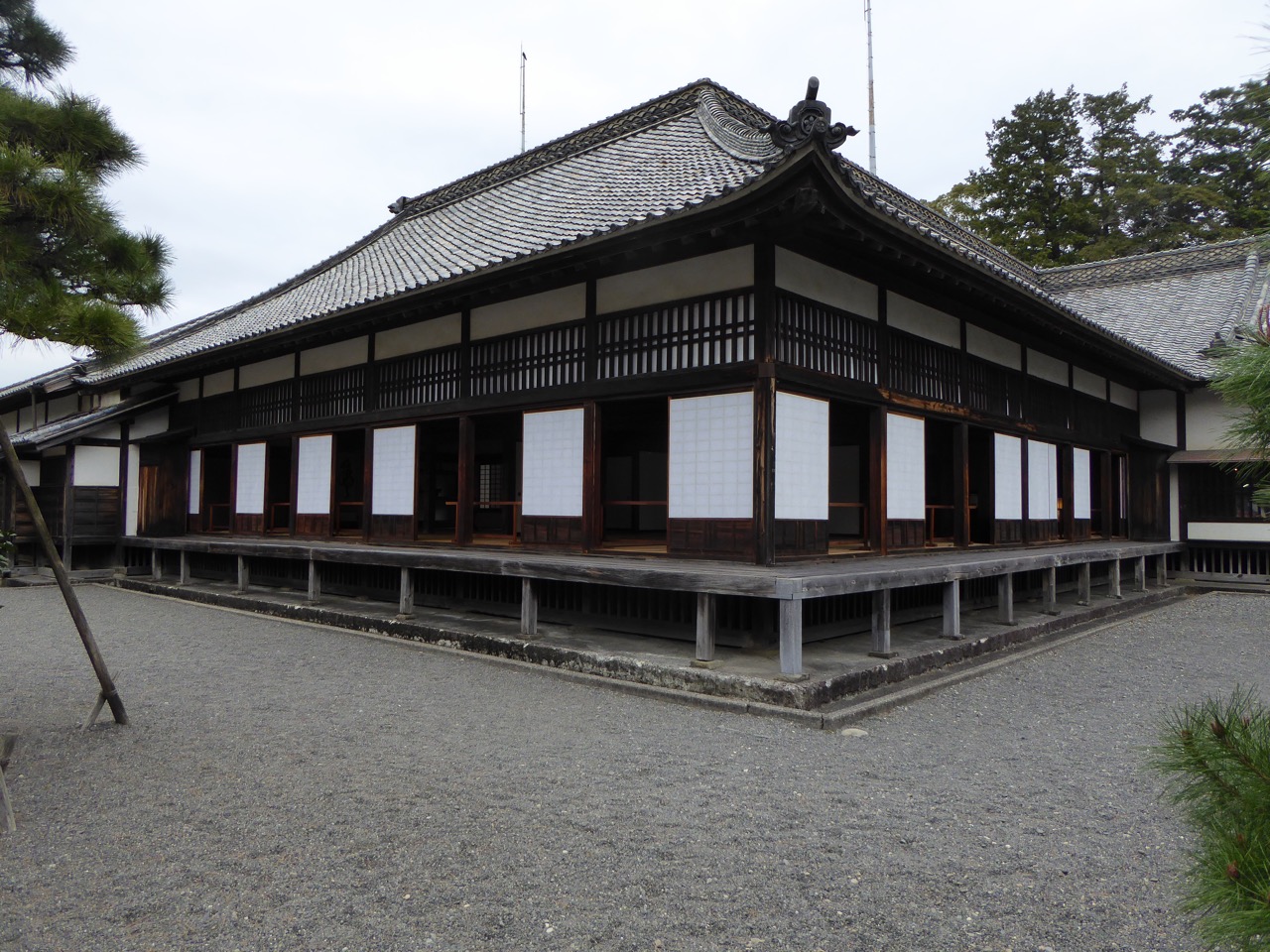 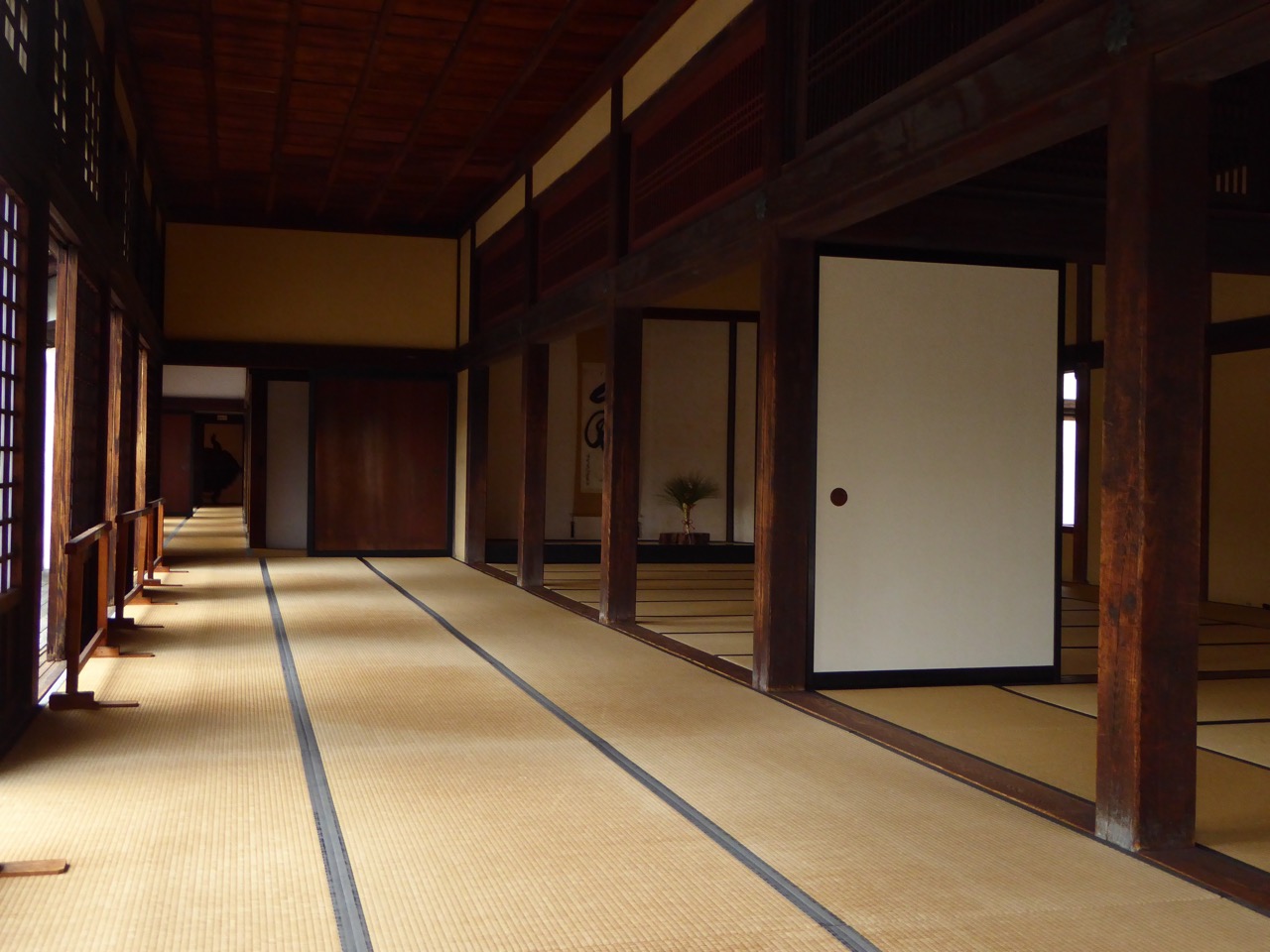