The Daimyo Matsudaira Tadayori was was a highly ranked vassal of the Tokugawa clan, born in the year Oda Nobunaga was killed, 1582, and killed in an argument following a tea ceremony in Edo in 1609.

During the Battle of Sekigahara in 1600, he was entrusted with the security of the Tokugawa and Matsudaira ancestral home, Okazaki Castle in Mikawa (Aichi Prefecture). Following the battle, he was assigned Inuyama Castle (Aichi Pref.) and Kaneyama Castle in Mino (Gifu Pref.) Later that year his uncle, Matsudaira Iehiro died, and Tadayori inherited his uncles’ estates and stipend of 15,000 koku at Musashi-Matsuyama (northern Tokyo, Saitama Pref.)

At age 20, Tadayori’s income was increased two-fold by Tokugawa Ieyasu in 1602, and he was transferred to the important Hamamatsu Castle with 50,000 koku. Tadayori’s wife was a daughter of Oda (Nagamasu) Yuraku, a younger brother of Oda Nobunaga. The couple had six children between them. 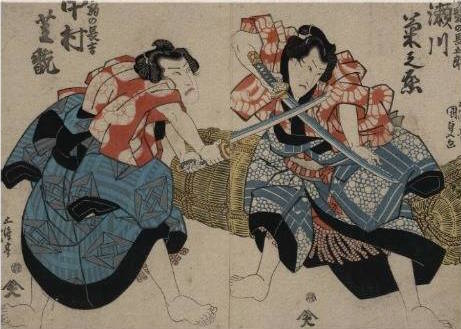 Tadayori was on Sankin Kotai duty, the daimyo’s required alternative attendance of the Shogun’s court, when he was invited to a tea ceremony at the home of Mizuno Tadatane, a cousin of Tokugawa Ieyasu and the head of the Mikawa (Aichi Pref.) Mizuno clan, on October 26, 1609. Other guests included the feudal police chief, hatamoto, Kume Saheiji and Hattori Hanhachiro.

Following the tea, the men retired to drinking sake and playing a form of Japanese chess called Go.

While Mizuno and Hattori were playing, an argument over a winning move resulted in tempers flaring and swords being drawn. In attempting to quell the fight, Matsudaira Tadayori was killed. He was 27 years old. His grave can be found in the Seigan-ji Temple, in Fuchu, western Tokyo.

Hattori and Mizuno were both ordered to commit seppuku over the incident, which occurred a month later.