Hikone Castle, The Castle Spared By The Japanese Emperor 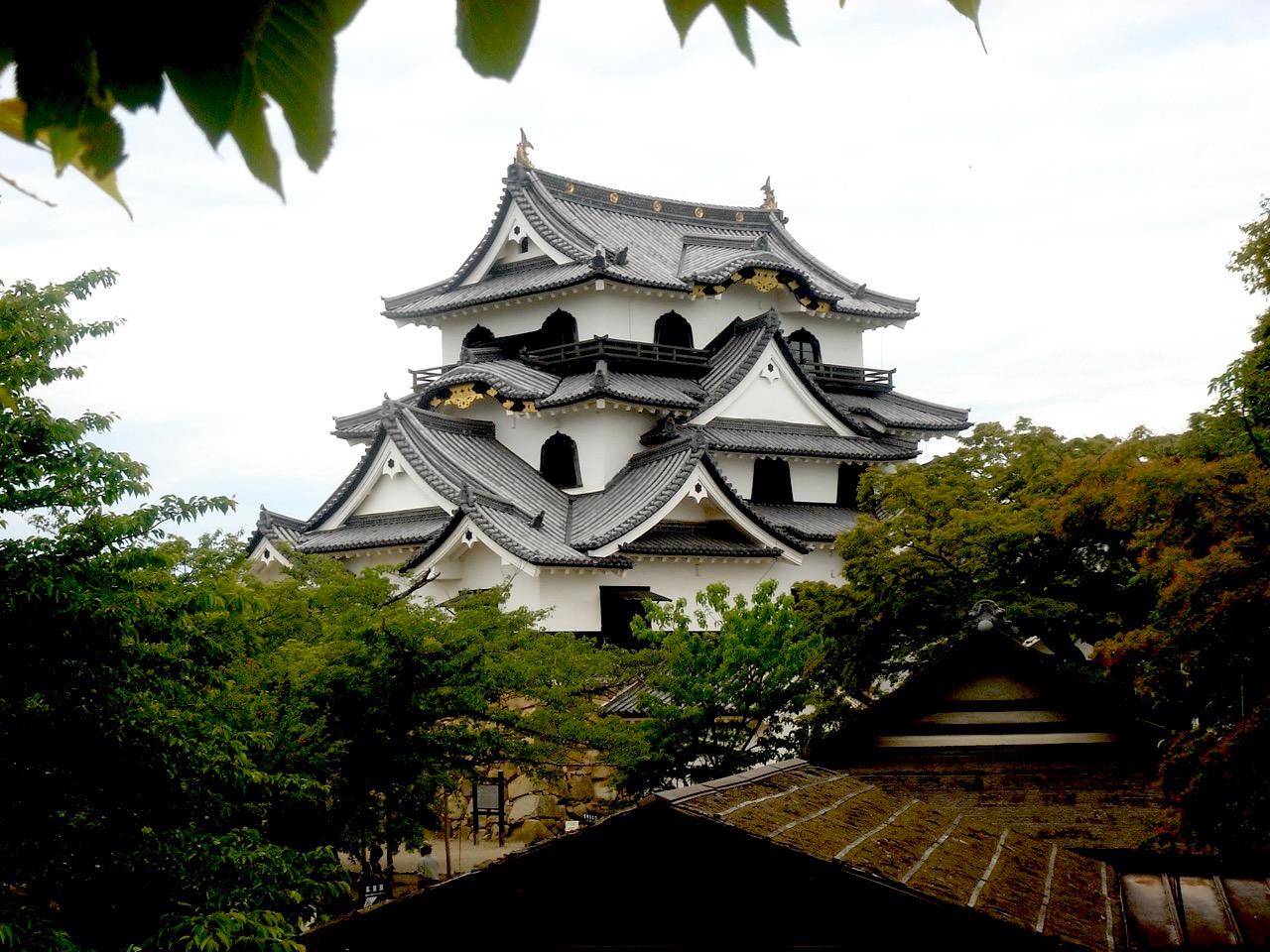 Hikone Castle is classified as a hirayama-jiro, a castle built on a low hill and using the surrounding flatlands as part of its design. It is one of only 12 castles across Japan with its original tower keep, and one of just five registered as National Treasures. The hilltop castle was constructed in 1603 on the orders of Ii Naomasa. 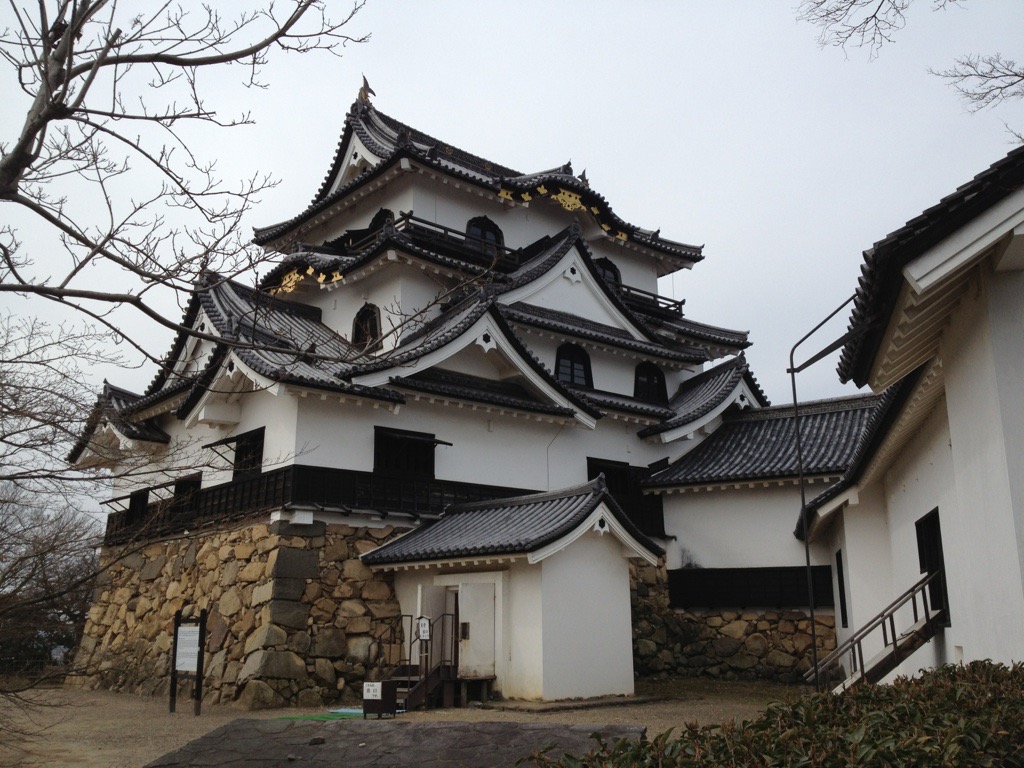 The Hikone region was originally in the possession of Ishida Mitsunari, who had his main castle on the nearby Mt. Sawayama. Mitsunari was the leader of the Western forces loyal to the Toyotomi clan, former rulers of Japan. He would face Tokugawa Ieyasu in October of 1600 at the biggest, most decisive field battle in samurai history, Sekigahara, and lose. Ishida’s loss at Sekigahara led to Sawayama being attacked and partially destroyed in the days following the skirmish. With Ishida later captured and executed, Tokugawa Ieyasu awarded the strategically important lands to his close friend and trusted ally, General Ii Naomasa.

Although grateful for the lands, Lord Ii refused to occupy the castle on Sawayama, due to its connection with the vanquished and much despised Ishida Mitsunari, its inconvenient location, and following Sekigahara, its war torn condition, and so he had it razed. His hatred of Ishida Mitsunari was such that he ordered his workers to remove the top 15 meters of soil from the mountain so as to completely destroy any trace of the Ishida fief. Instead, he built a larger, stronger castle about one kilometer closer to the eastern shores of the great Lake Biwa. The castle was named after the hill on which it occupied. Hikone. 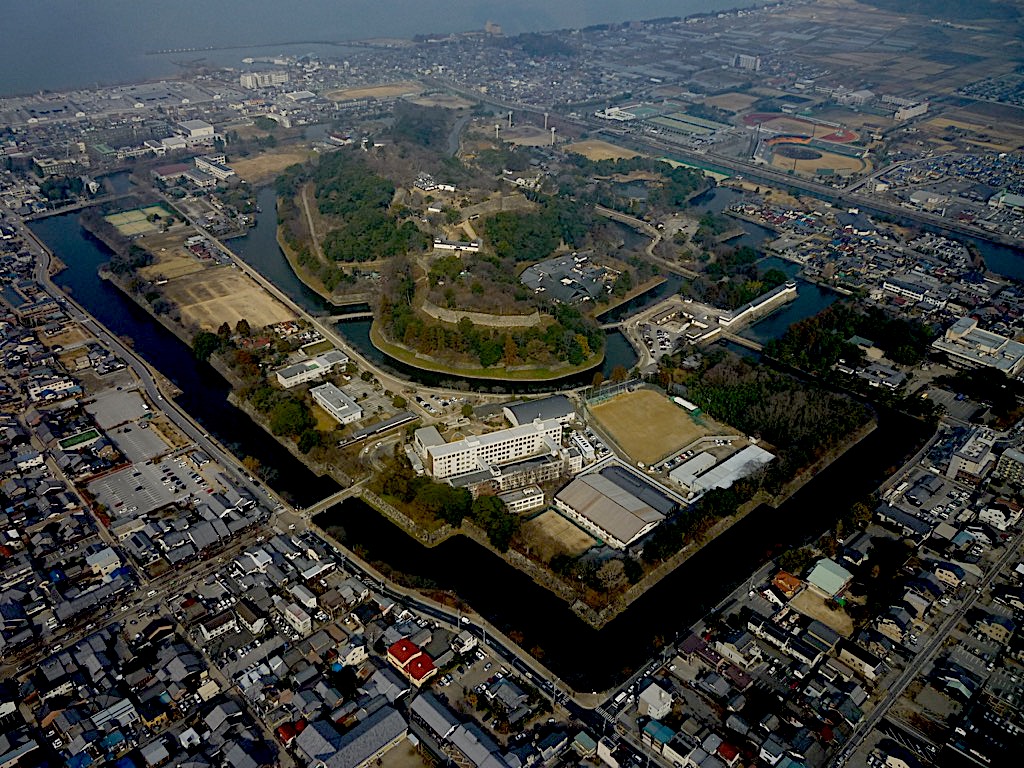 Naomasa never saw the completion of Hikone, as he had been badly wounded in the closing hours of Sekigahara and never fully recovered, dying in 1602. His sons, Naotsugu and later, Naotaka oversaw the construction that took 20 years to complete.

Despite Tokugawa Ieyasu’s victory at Sekigahara, the nation was still at war, and in an effort to both save on costs as well as complete the castle quickly, many of the structures built at Hikone Castle were recycled from other castles. The main keep of Hikone, for example, was originally the main keep of Otsu Castle on the other side of Lake Biwa. Otsu was attacked and mostly destroyed during the Battle of Sekigahara, and so the top three levels of the five-story keep of Otsu were dismantled, and rebuilt as the keep of Hikone. This keep boasts 18 sets of hafu, (Triangular roofing devices) the most of any remaining tower keep in original condition. The upper floors’ mawarien railed balcony, the impressive kara-hafu roof elements and decorative kato-mado windows are also worth noting, as these accentuate the small castle’s features, making it look even more impressive from a distance, a trait that has been likened to the makeup of a Kabuki actor enhancing his character’s features.

A number of other buildings and structures classified Important National Cultural assets, including the Tenbin Yagura, or Balance-Scale Turret, and the Taikomon, or Drum gate Turret and other gates and watchtowers came from Nagahama Castle, the Nishi-no-maru Sanju Yagura (West Wing Three Story Turret), and the castle’s original stables came from other local castles.

The castle was held by the successive lords of the Ii clan until 1874, some six years after the end of the feudal era.

Japans’ long feudal period ended in 1867 when the Tokugawa Shogunate collapsed, and power reverted to the Emperor in 1868. Seen as reminders of that feudal past, and in an effort to modernize, many castles were abandoned and destroyed. The Emperor Meiji happened to be touring the Shiga area in the early period of his rule, and having seen the beauty of Hikone Castle, requested it be preserved. The castle was listed as a National Treasure in 1952. 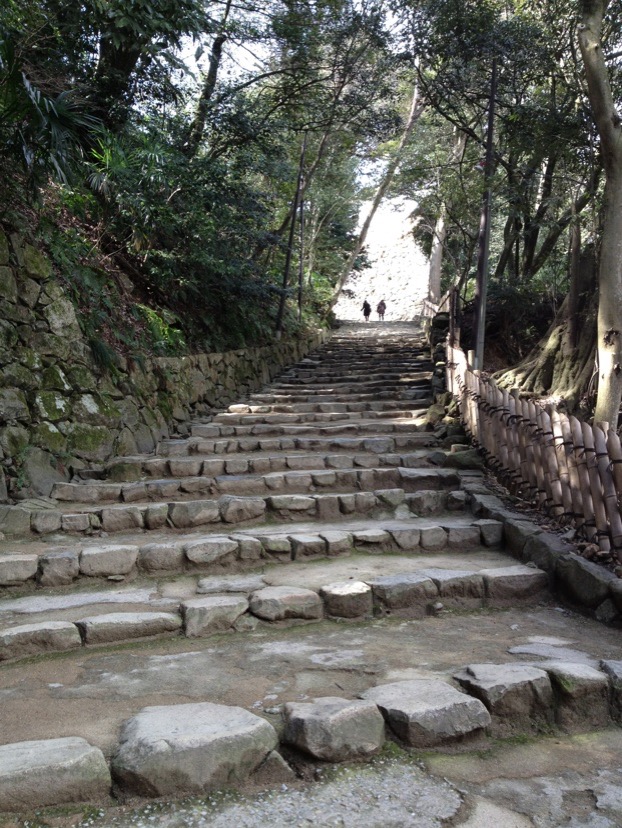 Hikone Castle was exceptionally well designed for defense. Although only two of the original four surrounding moats remain, should attackers ever have made it as far as the modern ticket office, there were more surprises in store. On entry, the sloping path to the Honmaru, (Central Bailey) looks gentle, almost easy to climb, however this design is deceptive too. Created to hinder the advance of any attacking army, the pacing distance and height of each step varies, making it difficult to maintain momentum and balance, particularly for heavily armored warriors under fighting conditions.

Having made it up the slope, attackers would find themselves under the Rokabashi Bridge and then have to make three left turns spiraling up ramparts to gain access to the bridge, under the full view of the matchlock gun and arrow firing warriors manning the Tembin watchtower. Incidentally, while a matchlock gun could be reloaded in an average of 45 seconds, an arrow could be effectively loosed every five seconds.

Japanese bows are considered the strongest, most effective bows of the medieval period, with arrows tipped with heads created in the same way as samurai swords. The bridge, a major feature of the castles’ defenses, was collapsible, effectively cutting off all access to the Honmaru, or central bailey, housing the tower keep, in times of attack. 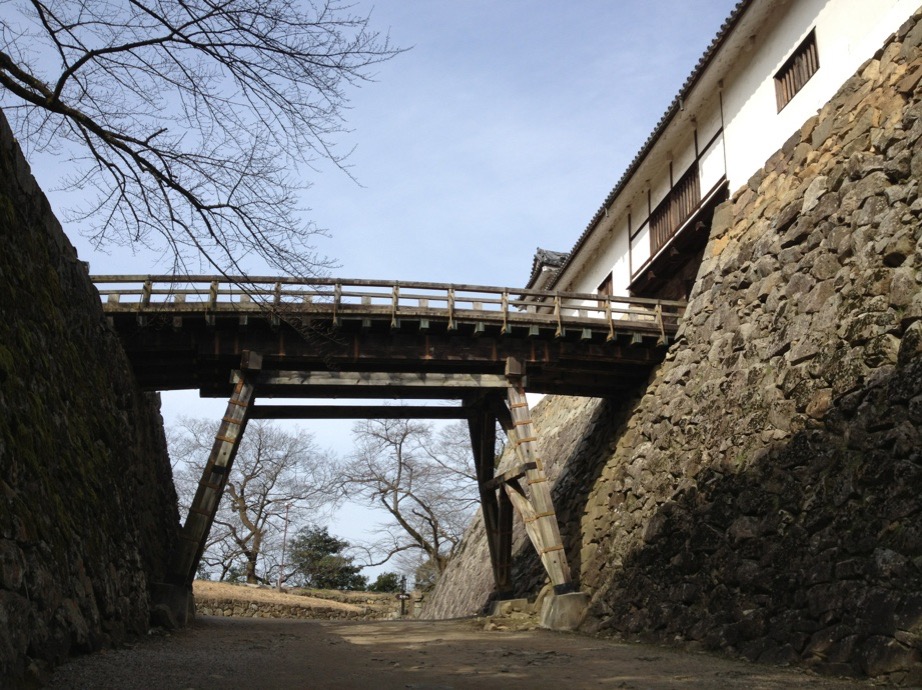 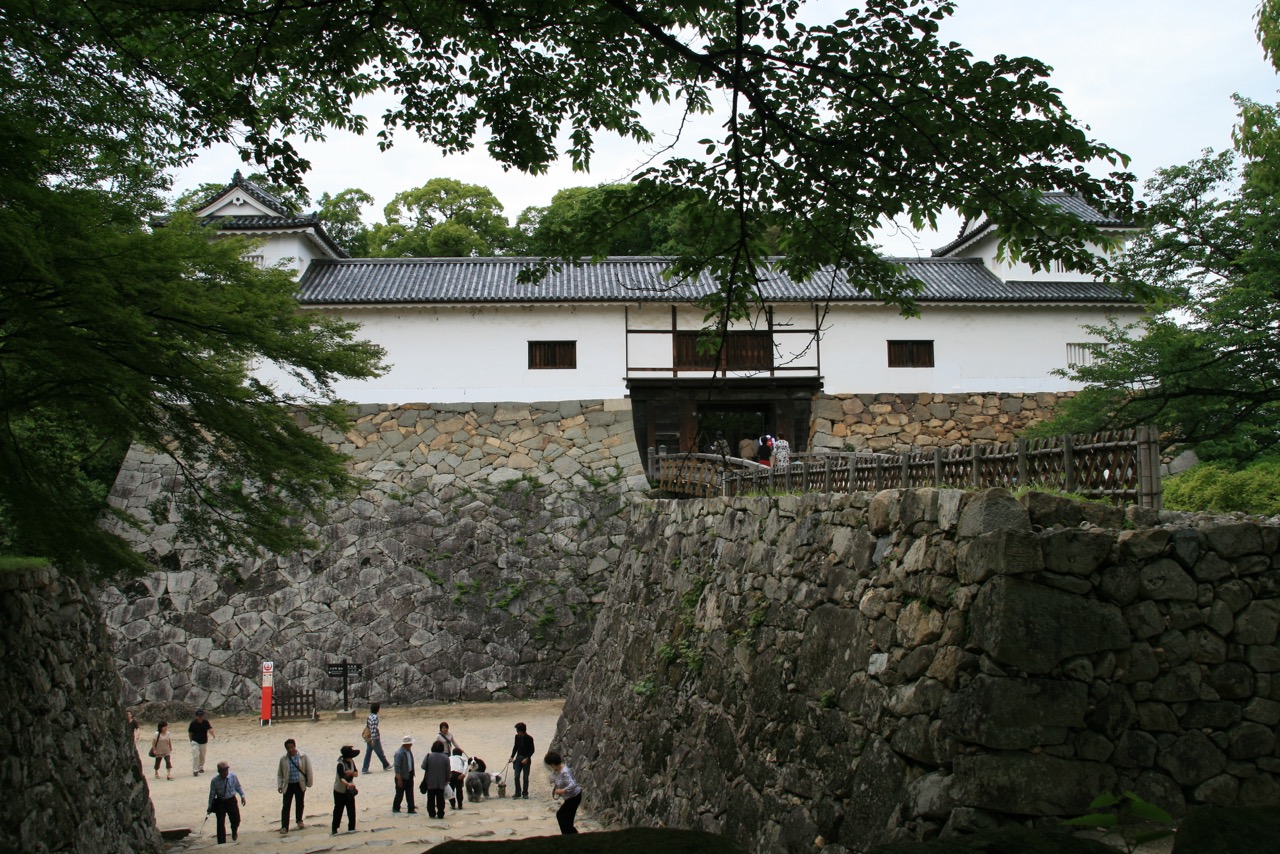 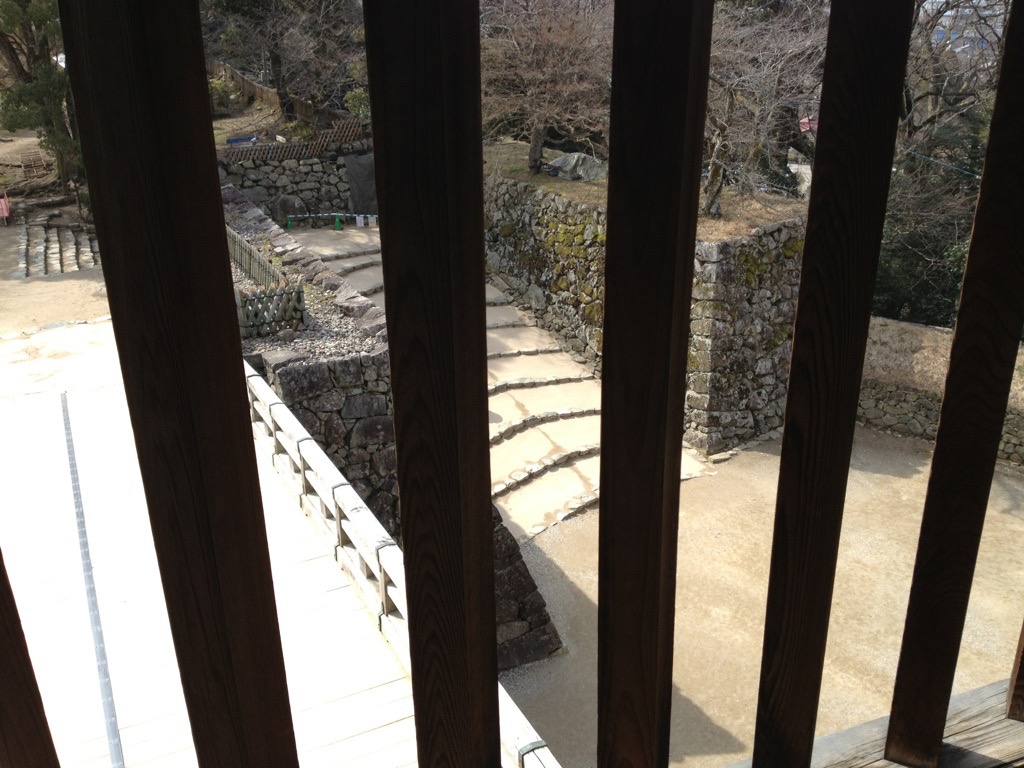 Looking down on the defensive positions  from the Tembin Yagura Watchtower

From the outside, the lower level walls of the donjon appear to be like the walls of many Japanese castles, covered in smooth, white plaster. Inside, small triangular and rectangular portholes called “sama” line those walls, ready to be punched out for a matchlock gun or arrows to be fired through. The keep itself is the National Treasure, and although there is little to see display wise inside the castle itself, the architecture, interesting use of odd shaped timber beams, and the overall design is of great interest. Steep stairs not only save limited space inside the donjon, but would have hindered armored attackers, while assisting defenders. 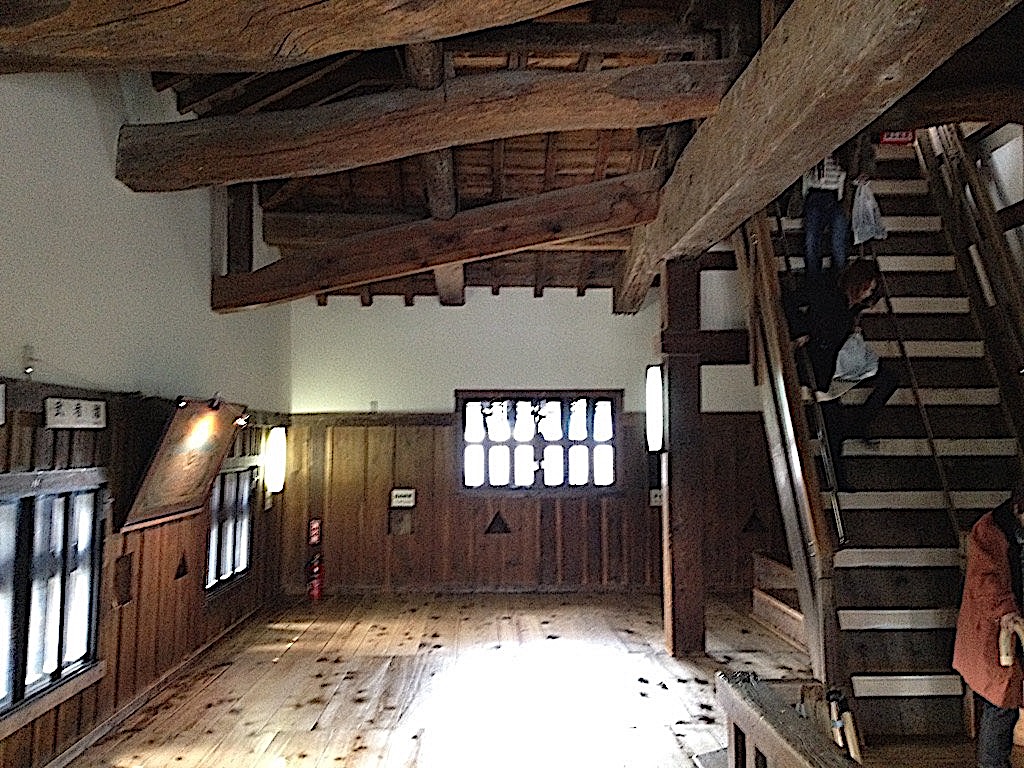 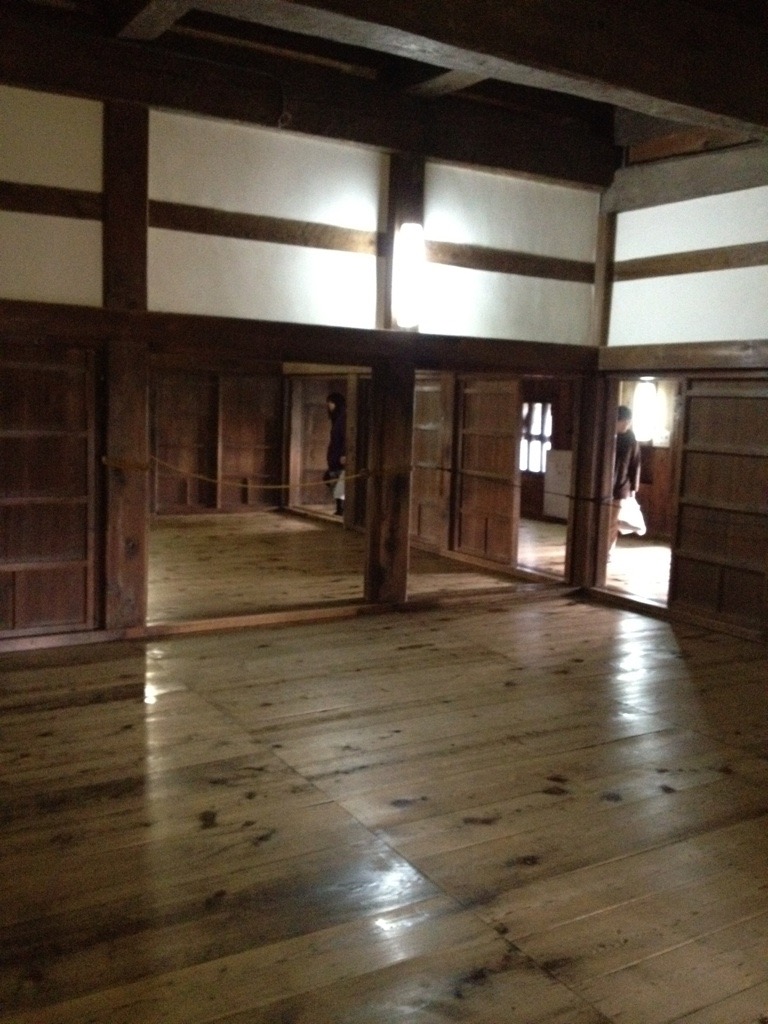 In the uppermost level of the over 400 year old Hikone Castle is a small triangular shaped secret room within the hafu, the triangular roofing fixtures often seen in Japanese castles. It is almost two meters wide, about 50 cm deep, and only 175cm at its peak. Small porthole-like openings line the outer wall. These, like those on the fortresses’ first floor, were to be used for gunners. If you did not know the secret room existed, you may not even see the small entrance hatchway of a sliding door at floor level. It is not usually open to the public, and very few know of its existence. The room is believed to have been designed should the castle ever come under attack, the lord and two to three retainers would crawl into the small space to commit ritual suicide, the secrecy of the room meant the lord’s head would never fall into the hands of the enemy. 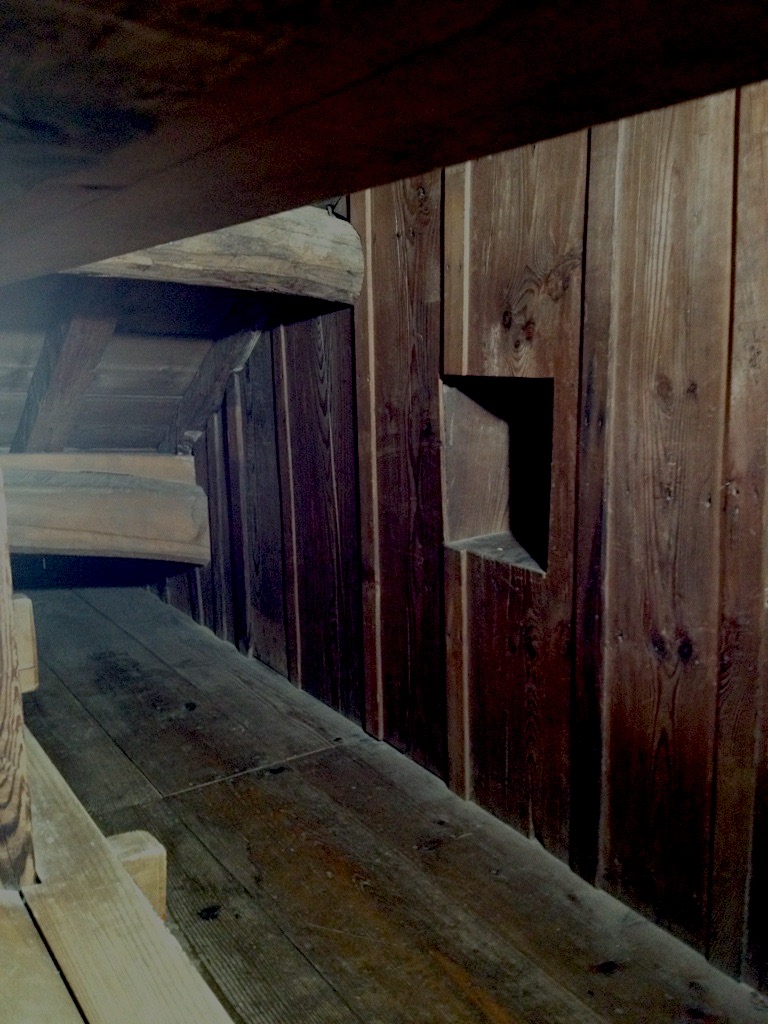 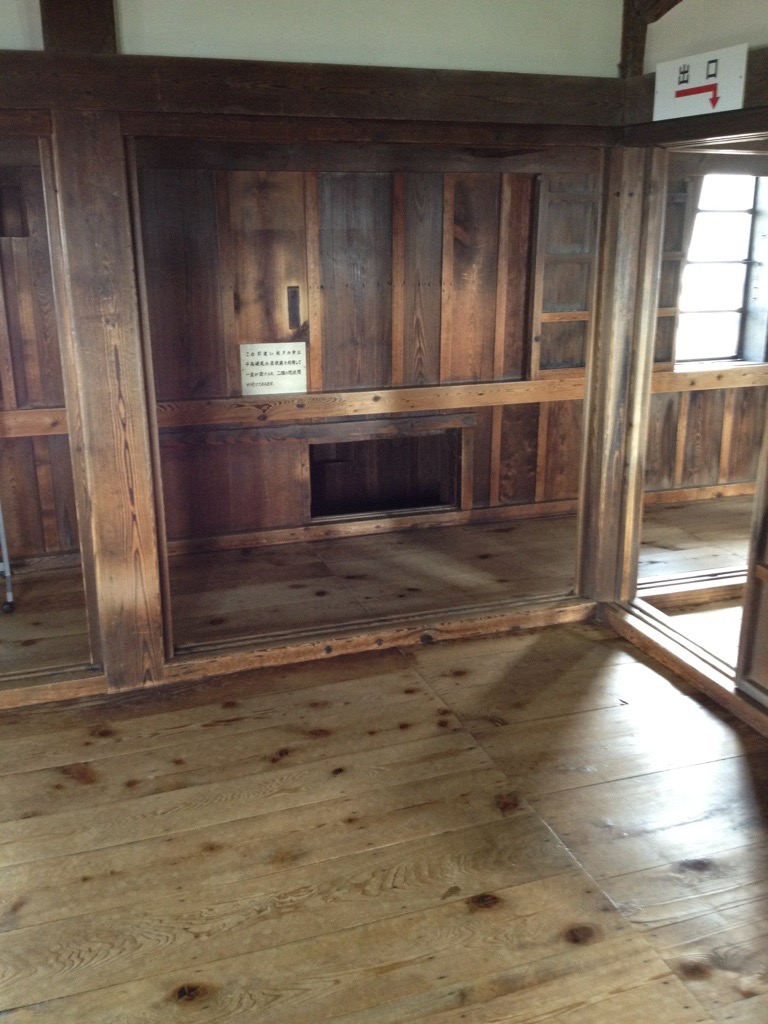 Below the castle, the extensive Genkyu Rakuen gardens are beautiful year round, and feature a number of traditional structures and tea houses and the Keyaki Goten, one of the very few remaining castle palace residences and living quarters of the lords. Also at the base of the mountain is a fascinating museum designed to resemble the lord’s mansion, dedicated to the Ii clan who ruled the province, containing original suits of armor, weapons and items used by the family. Shiga Prefectures’ National Treasure, Hikone Castle is recommended as an ideal place to see a real Japanese castle. 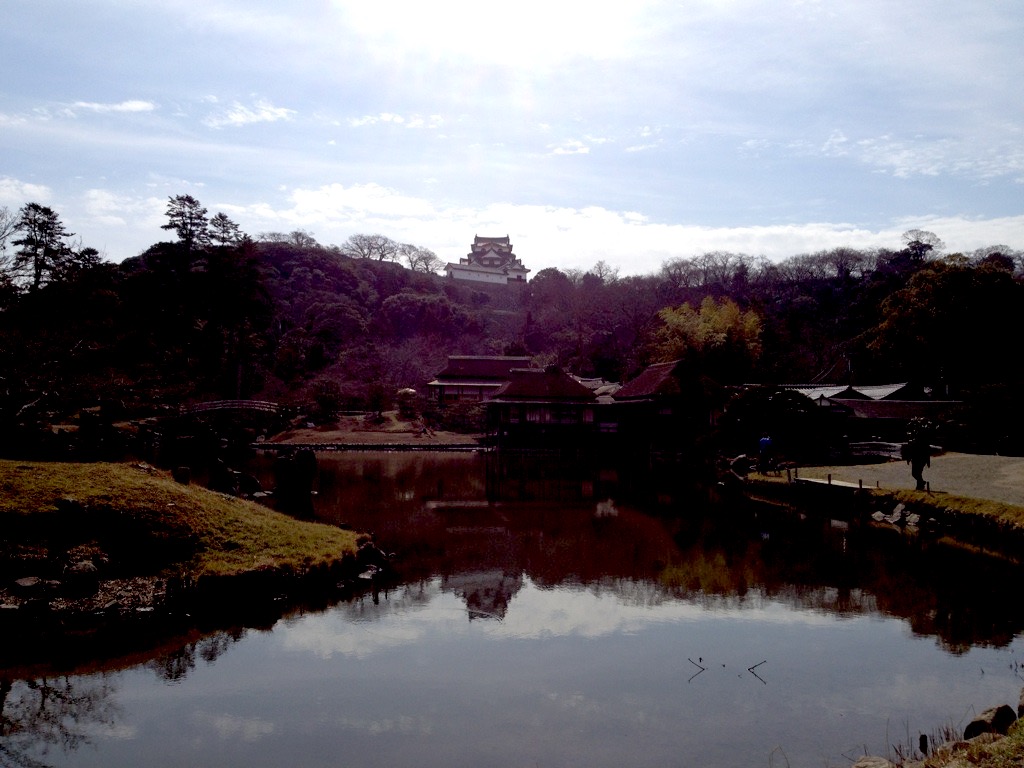