Ogaki Castle in Ogaki City, Gifu Prefecture was first built circa 1500 in the middle of a plain by Miyakawa Yasusada, and was originally named Ushiya Castle, as the Ushiya River once served as a natural moat, but was later known also known as Bi Castle and Kyoroku Castle. 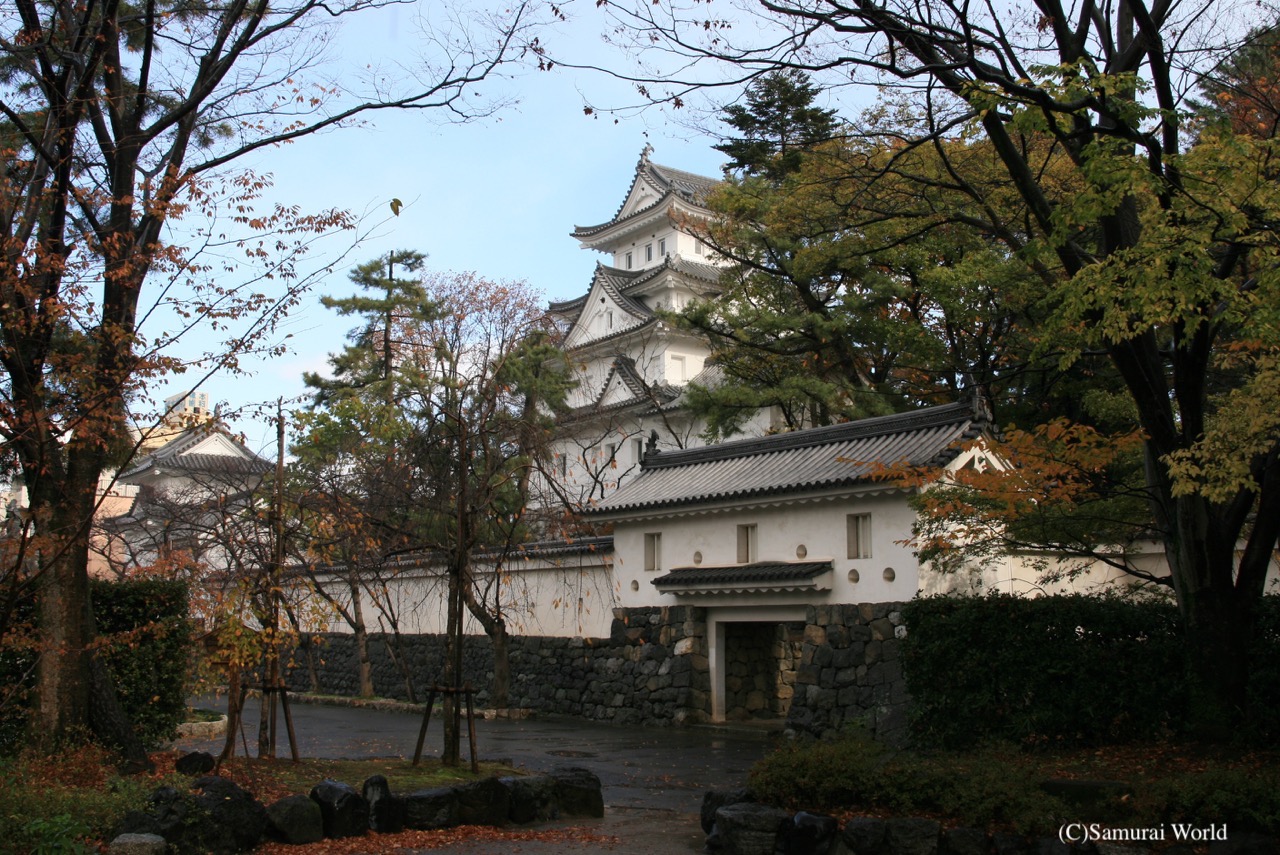 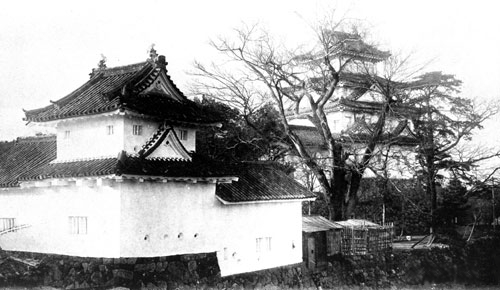 Historically, the Ogaki region was strategically important, being the transit point between Mino and Omi Provinces. It was seen as a vital location to the Viper of Mino, Saito Dosan. When Oda Nobunaga captured Inabayama (Gifu) castle in 1567、Ogaki, or Ushiya Castle as it was then known, came under Oda rule. Both Nobunaga and Toyotomi Hideyoshi fully recognized and understood the strategic importance of the castle, and in 1595 Hideyoshi ordered Ito Sukemori to expand the castle and construct of the Tenshu keep.

Interestingly, there were 4 moats, and the keep also had 4 floors. Very rare indeed, the reason being is that “4” and “death” can be read the same way, and has long been considered an unlucky number. Particularly a 4-floored keep could be read as “Shisoo”, or “About to die”, and deemed most unfortunate! To avoid this, it was said that the first floor was simply a base floor, and that the “tower” stood 3 stories high. Ogaki castle was rumored to have been covered in lacquer over the whitewash Shikui Nuri Gome, further 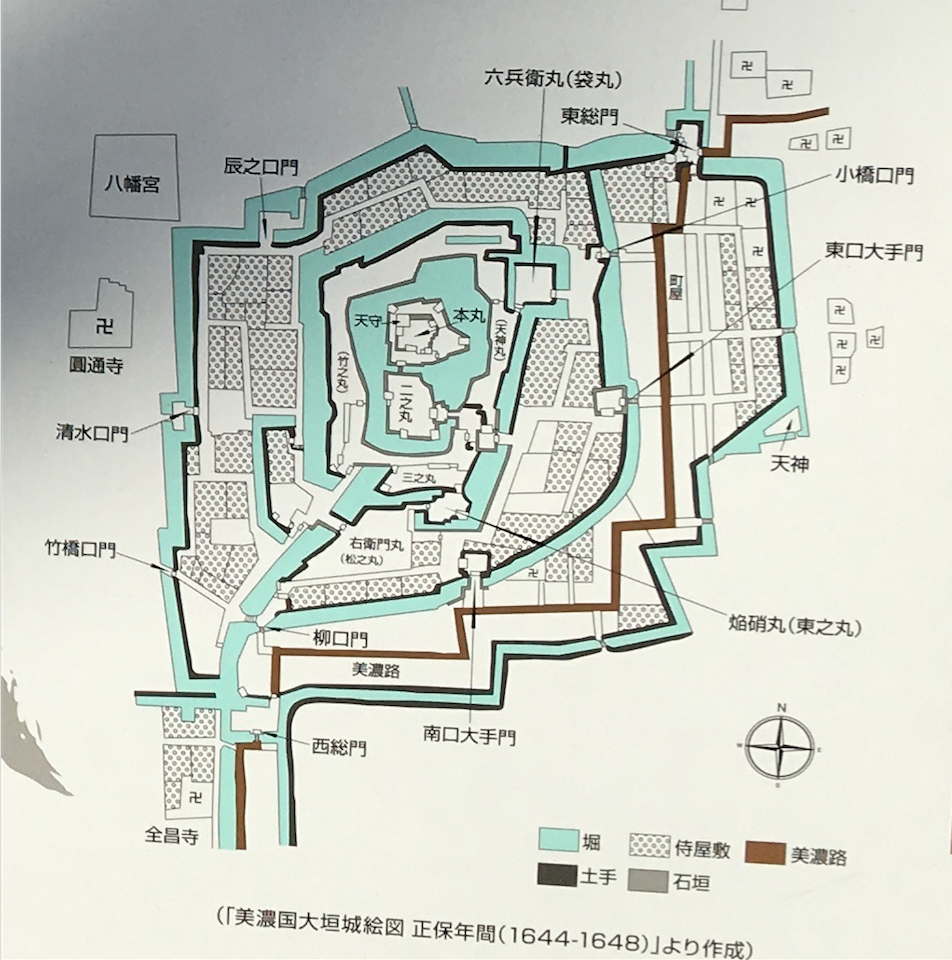 Diagram of the layout of Ogaki Castle

Ogaki played a major role in the Battle of Sekigahara, having been the site where the Western forces under Ishida Mitsunari gathered, before being outmaneuvered by the Eastern forces. Tokugawa Ieyasu had originally considered laying siege to Ogaki, and even damming the nearby Ibi and Kuise rivers in an attempt to flood the castle, as Toyotomi Hideyoshi had done to Takamatsu Castle in Hyogo, but that would have taken time and become an expensive project. Instead, Ieyasu planted rumors among his spies that he was going to about face, head back through Sekigahara to Sawayama, —Ishida Mitsunari’s fief,– capture that, and then set his sights on Toyotomi Hideyori in the now undermanned Osaka Castle. The thought of having his home attacked and destroyed drew Ishida Mitsunari and the Western forces out of Ogaki on the night of October 20, 1600, and they walked the 14km to Sekigahara undercover of darkness in a pouring rain. The next morning saw the biggest samurai battle in history take place.

Ogaki castle was ruled by three generations of the Ishikawa clan, two generations of Matsudaura (Hisamatsu) clan, followed by two lords of the Abe clan, then a single Matsudaira before being handed to the fudai daimyo Toda clan in 1635. Ogaki would remain in the hands of 12 generations of Toda until the Meiji restoration. Just outside of the castle grounds, in front of the Tenshu is a fine statue of Toda Ujikane, first of the Toda lords of Ogaki, dressed in his armour and mounted on a horse. 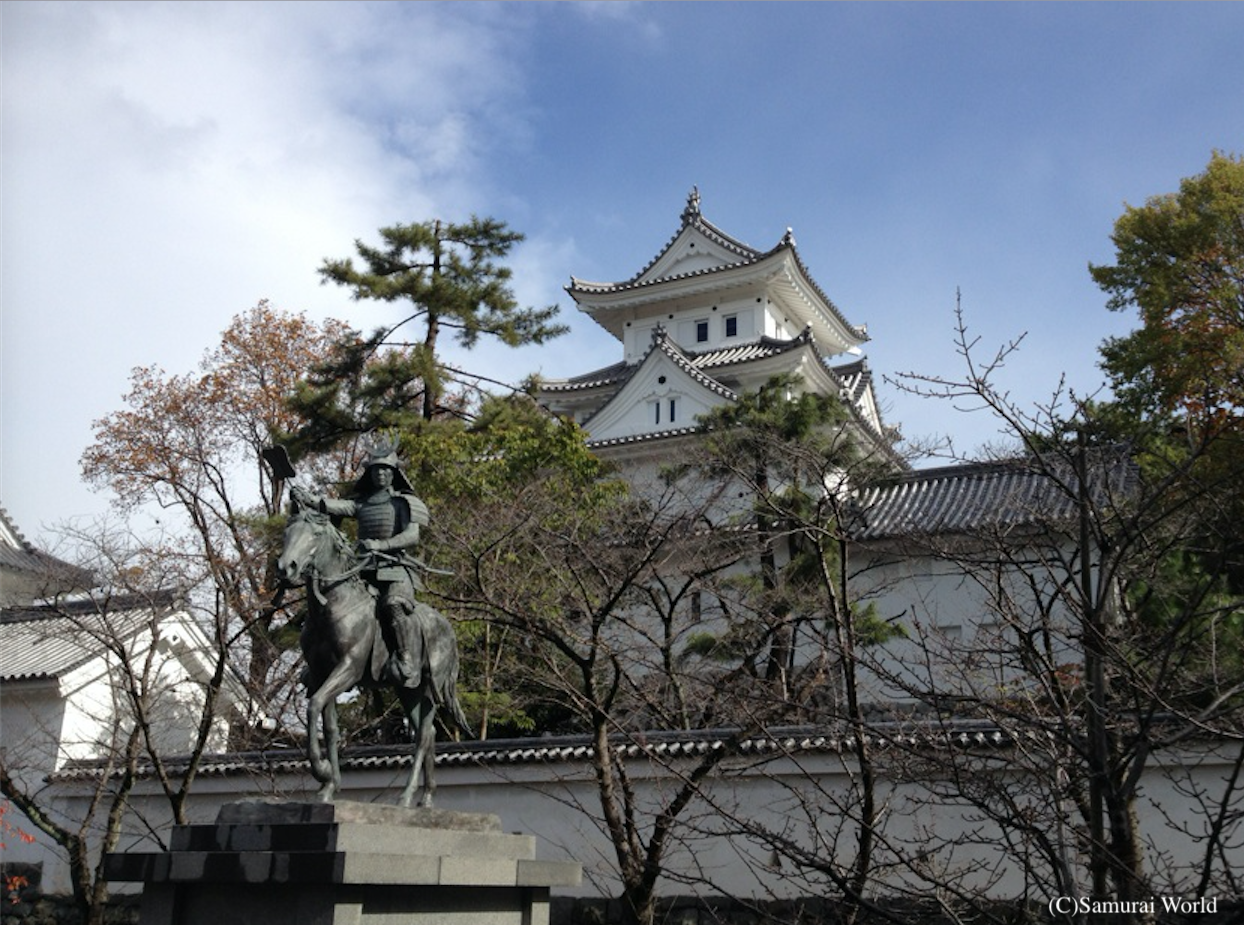 Because of it’s historical importance, and having escaped complete destruction during the Meiji period, Ogaki Castle’s keep and Honmaru sections were designated a National Treasure in 1936. Nine years later, it was all destroyed by wartime aerial bombing raids. The castle was reconstructed in April of 1959, but of concrete, and now houses an interesting collection of items relating to the castle, and the Battle of Sekigahara. 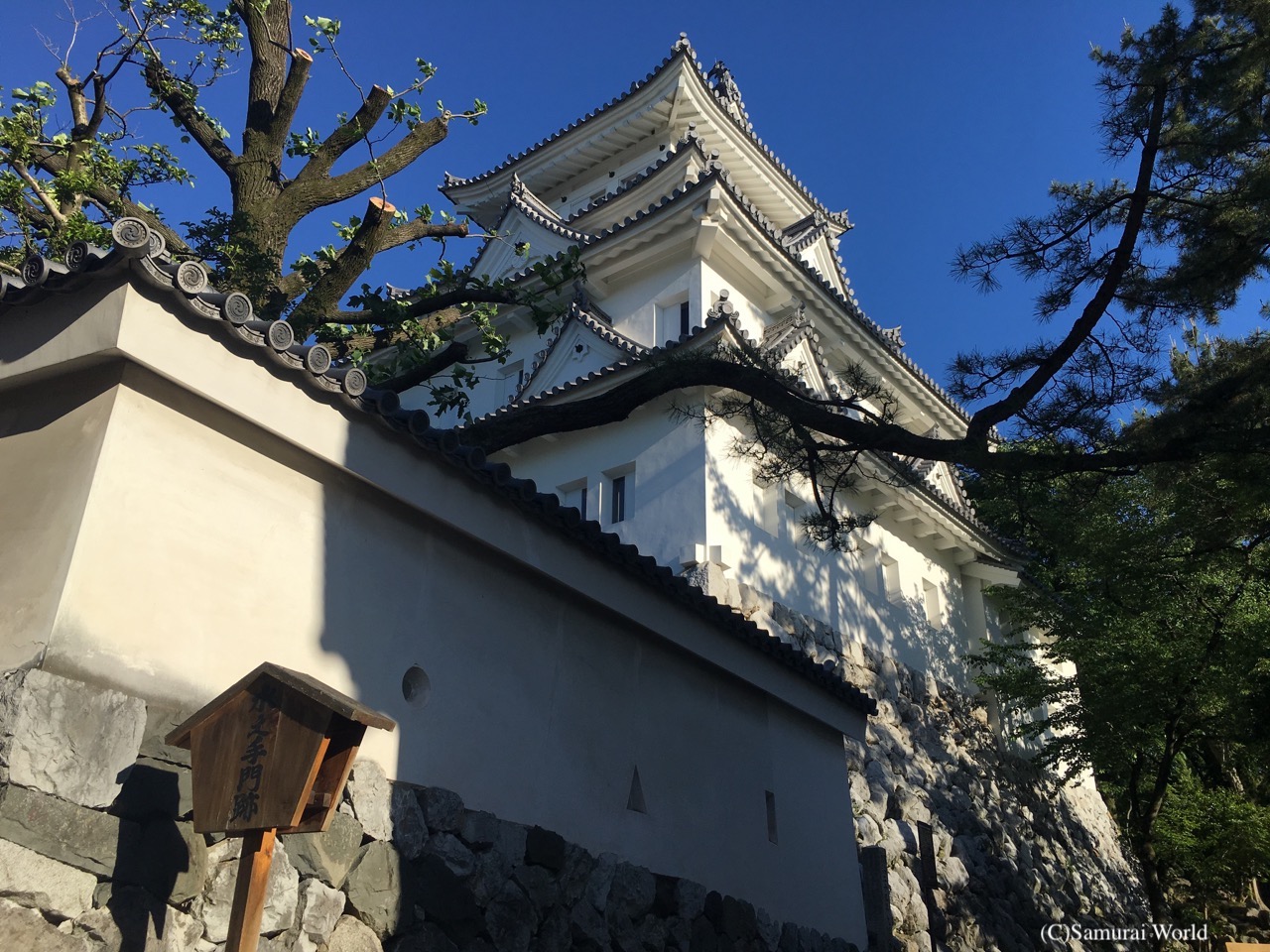 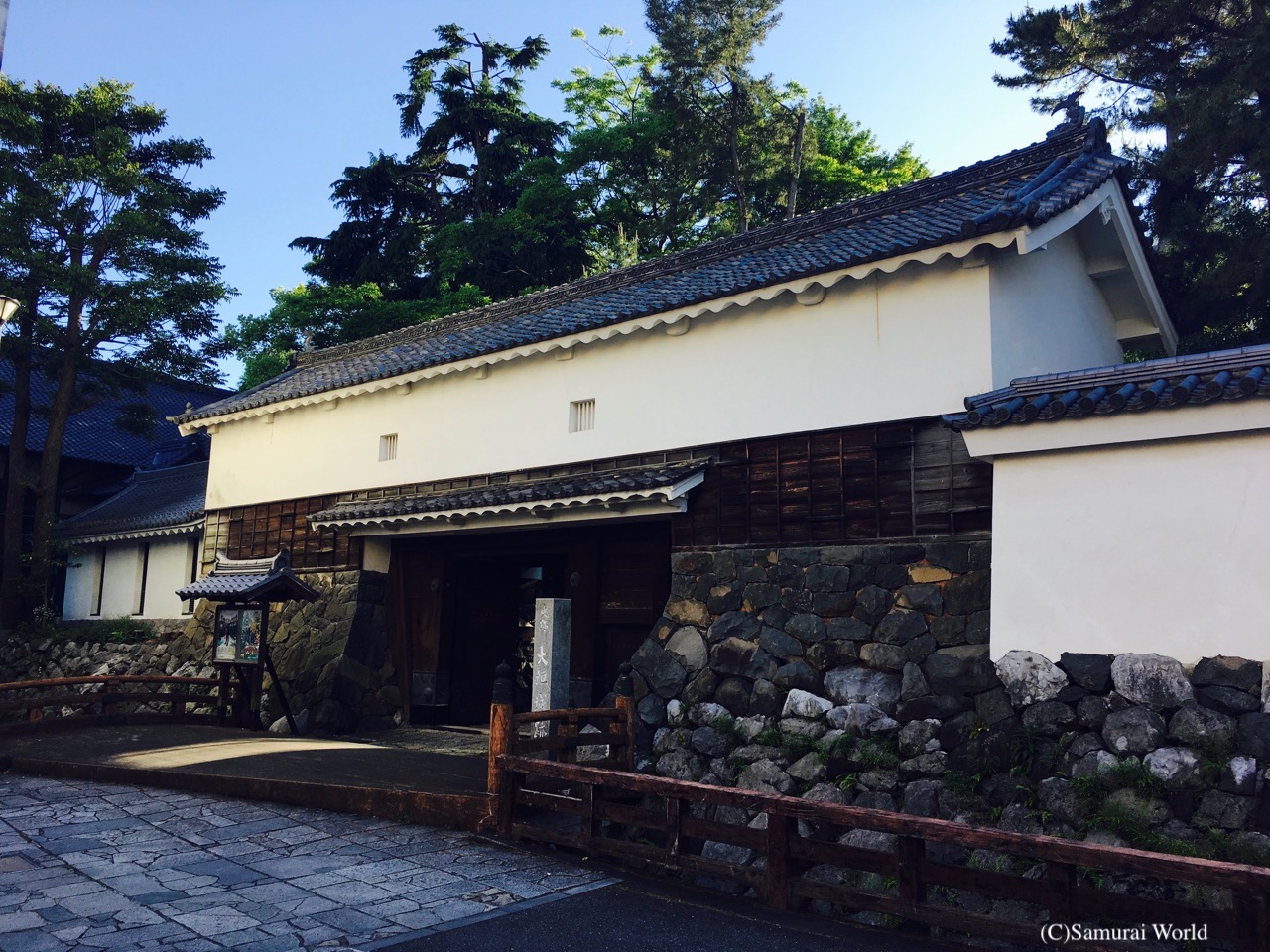 Ogaki Castle, precincts and moats seen from the air

Parts of the outer moat can still be followed, and seen from the air, the tree lined canals’ large square shape stand out amongst the urban concrete.

Interestingly, one of the gates of Ogaki Castle now exists in Kakamigahara City. The gate was purchased when much of the castle was abandoned and demolished in the Meiji Period, and one of the gates was taken to Kakamigahara. Another gate was also relocated and now serves as the main gate for the Heirin-So Temple of Ogaki. 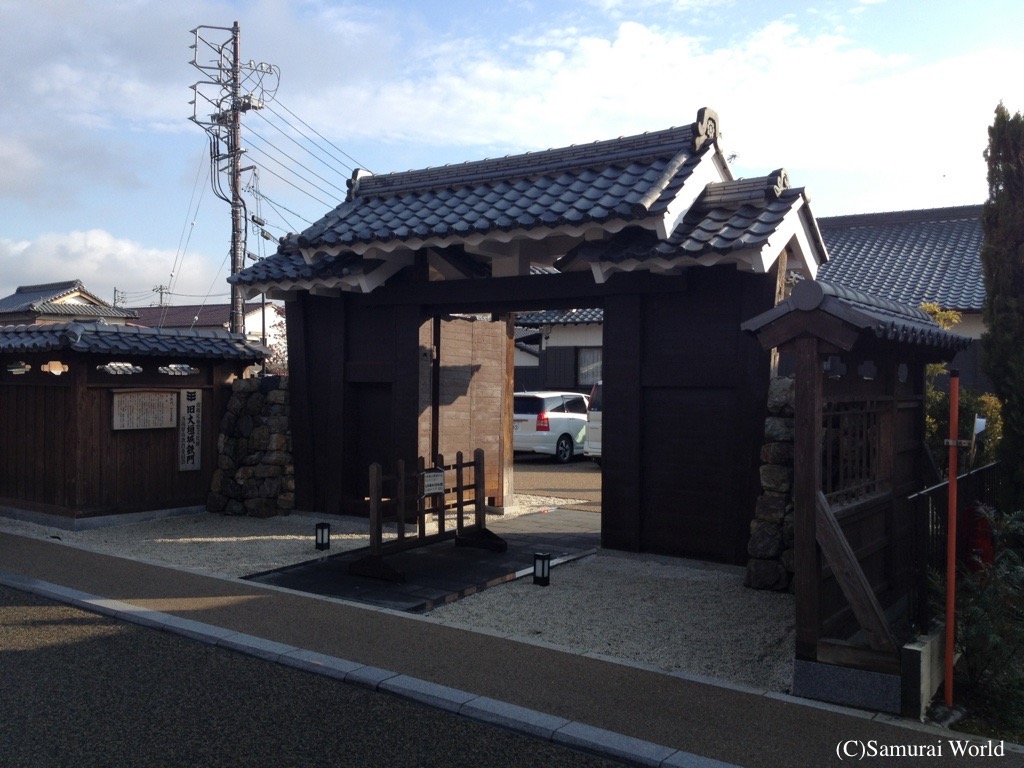 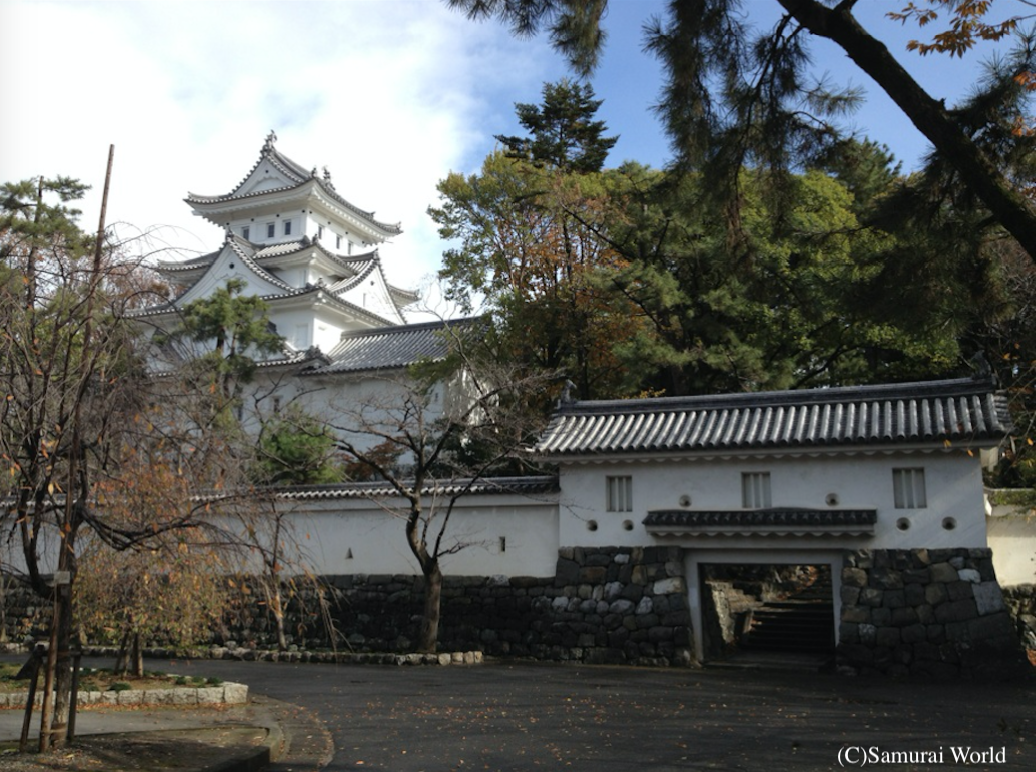 Of all the castles across Japan, there are only four which can be 100% faithfully reconstructed, one of those is Ogaki Castle, so maybe someday, we will see Ogaki Castle returned to it’s original, wooden state.